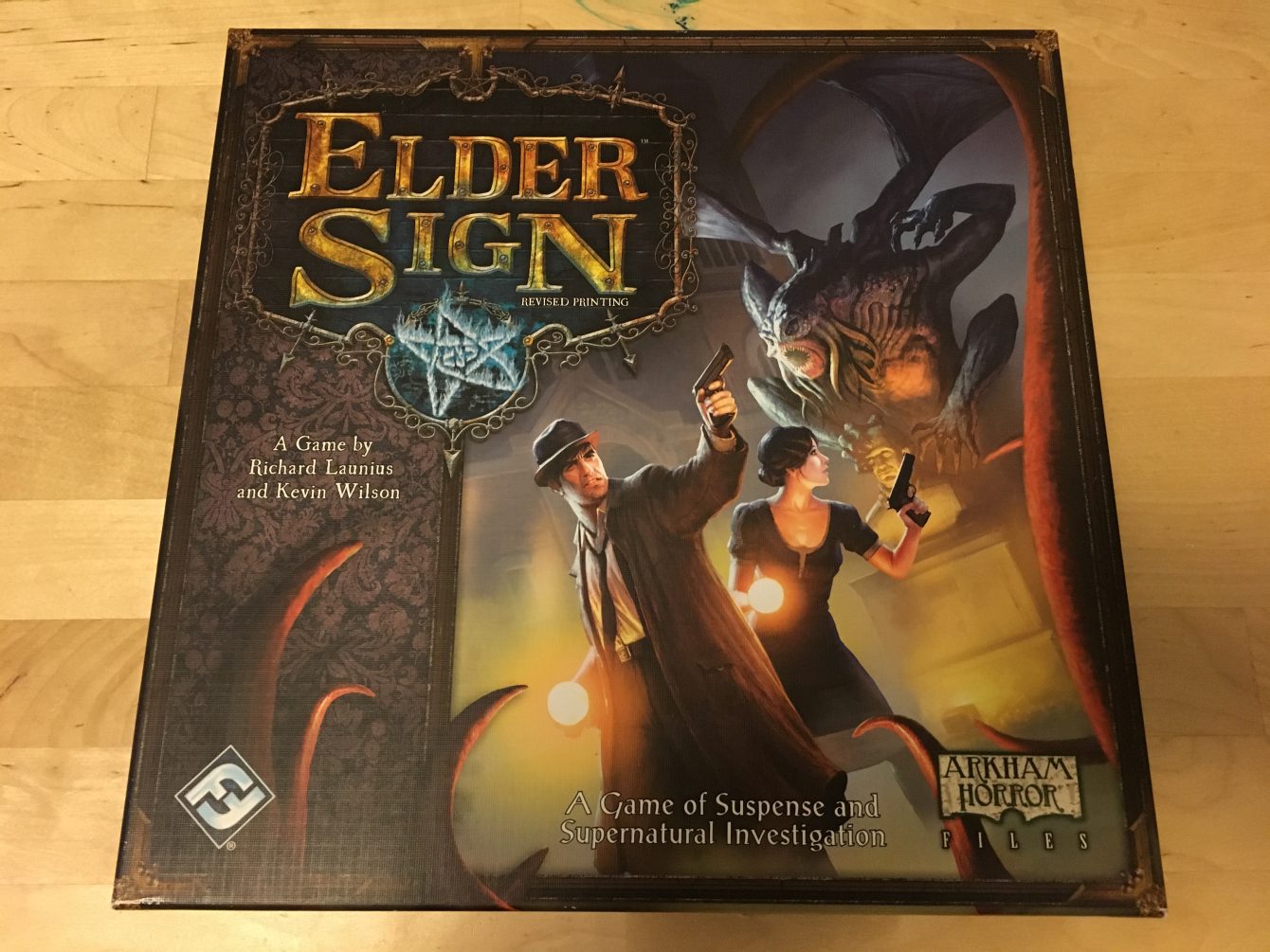 Today, Gameosity reviews Elder Sign – a co-op dice-rolling game about saving the world from the awakening of the Ancient Ones of the Cthulhu Mythos.  Will our luck hold out, allowing us to gather enough resources to beat back the darkness one more time, or will the dice royally screw us, leaving us helpless in the face of cosmic horror?

Rob:  What is it about Cthulhu that gets so many people excited?

Rob: Har. But I mean, there’s so much content based on it – board games, video games, video board games – that can’t be coincidence. Why do people keep making games about it?

Andrew: Well, I suppose it could be because it represents the unknowable nature of the infinite, which is a reality with which every human must come to terms. Humans are finite and fragile, and our universe is full of things we will never understand. So in a way, it does indeed connect to a resonant aspect of the human experience.

Andrew:  But mostly, I’m pretty sure it’s the tentacles.  They’re designed to snare, what with the suction cups and all.

Produced by Fantasy Flight Games, Elder Sign is a cooperative dice-driven adventure for 1 to 8 players.  You will take on the roles of investigators who are exploring a museum in an attempt to find enough of the titular Elder Signs to prevent one of the Ancient Ones, super-monsters from the Cthulhu mythos, from awakening and pretty much wrecking the planet.

Worth noting is that Elder Sign is a member of a pedigree of Fantasy Flight Games set in the same universe.  The big daddy of them all, Arkham Horror, is a big, complicated adventure game which has more expansions than most games have components.  Elder Sign draws on many of the same art and character assets, while attempting to condense the core experience of Arkham Horror from an investment of several hours into a much quicker game.

Rob:  And it definitely manages that.  The box says it plays in 1-2 hours, but really, once you’ve got the rules and tactics down most games won’t come close to the 2-hour mark – even at max players.

Each player’s investigator has a special power and starting gear, and each Ancient One changes the rules of the game slightly, making a game spent trying to stop Cthulhu feel very very different than one up against Shub-Niggurath.  But by focusing on the dice mechanics, Elder Sign retains the ‘we’re all screwed’ feeling of its mythos while being reminiscent of nothing so much as Yahtzee with tentacles.

Andrew:  Ok, maybe that makes it sound bad, but it isn’t!

Each turn, players will have the option of entering one of the open museum rooms, each of which represents a series of challenges which can be overcome by the right combination of symbols.  Players then roll a handful of the delightfully colorful custom dice, possibly adding even more through 1-time-use items, in an attempt to roll the requisite number and combination of symbols.  If you complete a challenge, those dice get allocated and you roll on.  If you fail, you lose a die from your pool and try again.  If you manage to overcome all the challenges on a room card before you run out of dice, you succeed and reap the benefits, collecting items, spells, allies, and the all-important Elder Signs, which are the key to winning the game.  If you run out of dice before you can manage a victory, well, you’ll be paying the price in sanity, stamina, and Doom Tokens.

Players can’t really do anything on each other’s turns aside from offer advice or cheer each other on (you can’t, for instance, use an item to give another player an extra die), but that’s actually good – it keeps the flow of the game fast and the tension of dice rolling is something with which everyone can stay engaged.

Andrew:  See, to me, the dice are what really makes this game work.  Dice rolling is an inherently chaotic thing, and it really does create tension as you watch another player try to squeak by a perfect roll on the absolute last die left in their pool.  I think that, in particular, a co-op game is well served by an element of randomization.  Without it, the game would be both slower and more prone to ‘optimization’, which could easily lead to an experienced player just telling other people what to do.  That’s no fun.  In Elder Sign, when someone manages that miracle roll, we all just cheer.

Rob:  Exactly.  On the other hand, the dice mean you’re never guaranteed to succeed, no matter how certain something seems.  And that’s good, too.  Even though it can be really frustrating to fail at something that should be easy, those table-flipping ‘Oh COME ON’ moments bring everyone together in our mutual aggravation at this stupid, stupid game.

Andrew:  I thought we liked this game.

Rob:  Right, this stupid, stupid game that we like.

Adding to the tension is the clock, an omnipresent threat which advances after each turn.  Every 4 turns, the clock strikes midnight, and the players must resolve a Mythos card.  These produce both immediate effects which players have to deal with on the spot and lingering effects which last until the next midnight, and often herald awful, player-wrecking consequences.

Rob:  The clock is a great example of the theme coming through in the game mechanics, though; the idea of running out of time and fighting against something infinitely more powerful than you is perfect for the mythos experience.  Midnight effects cause universal dread at the table, and that’s awesome.

Andrew:  Agreed.  The themeing in this game is pretty solid – the art is great and there is a huge amount of flavor text.  You can read it dramatically to enrich your experience, or summarily ignore it to speed up the game.  I recommend the former, but it’s your call.

Play continues until either the players manage to scrape together enough Elder Signs to seal away the Ancient One (yay!) or too many doom tokens amass and the Ancient One awakens (boo!).  In the former case, congrats, you have saved humanity for the moment!  Strike up the band, martinis on the roof.  In the case of the latter, you have one more chance to save the day by fighting the Ancient One in a last, desperate combat.  These fights are generally unfairly difficult and will more often than not result in a total loss.  But so it goes in the Cthulhu Mythos – humankind is rarely more than an insect in the face of the Ancient Ones, and squashed just as easily.

Andrew:  So, that’s pretty much the game.  Explore the museum, confront tasks by rolling dice, collect Elder Signs while avoiding Doom Tokens.  But despite the relative simplicity of the gameplay, or better yet, because of it, I think there’s a lot to recommend here.  Elder Sign is easy to learn and easy to teach, but it retains a base level of challenge that will keep players engaged.

Rob:  It’s got good quality components, too.  The tarot-sized cards with thematic art and all the iconography are really clear and easy to understand.  The custom dice are nice, the tokens are thick, and the base game comes with a good variety of characters and Ancient Ones for replayability.

Andrew: Well pointed out.  So yeah, Elder Sign is a good time, and well worth adding to your collection.  Sure, it’s chaotic and random, but if you think about it, that actually speaks to the fundamental nature of – wait a second, you just said ‘base game’, didn’t you.

Andrew:  So I guess we should probably bring up the expansion pack now?

Rob:  That seems like a thing we should do, yeah.

Elder Sign’s first expansion, Unseen Forces, is exactly that – an expansion of every facet of the Elder Sign experience.  It features more characters, more museum rooms, more Other World locations, more items, more monsters, more Ancient Ones, more everything.  It even features more dice in the form of the Blessed/Cursed mechanic, which will provide either a bonus die or a penalty die respectively.  But Unseen Forces doesn’t just add more stuff, it introduces a much higher difficulty curve to the game, and in doing so, it makes Elder Sign a whole lot better.

Andrew:  See, before Unseen Forces, it was entirely possible for us to get through a game of Elder Sign without ever sweating – if the dice fell right, we could just walk through challenges and win.  It wasn’t nearly a guarantee, but it happened, and wasn’t ever as satisfying as a nail-biting, hand-wringing, just-made-it-on-the-last-turn win.

Rob:  Unseen Forces doesn’t just add incredibly difficult monsters and unfairly powerful Ancient Ones, it adds a bunch of no-win scenarios and midnight effects.  Most turns don’t feel ‘safe’, and usually the best we could manage was damage control, rather than winning.

Andrew:  Of course, you don’t have to add everything from the expansion to get value from it – for instance, just leaving out the new Mythos cards would make the game larger, but not incredibly more difficult.  So it’s entirely possible to ratchet the difficulty setting to precisely the challenge you want it to be.

Elder Sign is a high-quality game.  Its components are nice, the rules are clear, and the pace of its action is fast and tight.  Once you add Unseen Forces it really becomes a game with a lot of replayability, able to run anywhere from solo all the way through eight players without too much of a strain.  And if Unseen Forces wasn’t enough, Fantasy Flight Games has recently announced Gates of Arkham, a second expansion planned for 2015, which promises to take the adventure beyond the boundaries of the museum and out into Arkham for even more nightmare-drenched exploration – and we can’t wait.

As a co-op game, Elder Sign fills a nice place in the collection, able to give an engaging experience without having to come at another player’s expense.  Though the random nature may be a turn-off to some, Elder Sign embraces its mechanics well, and manages to ensnare our wholehearted recommendation.

Andrew:  …With its tentacles.  See?