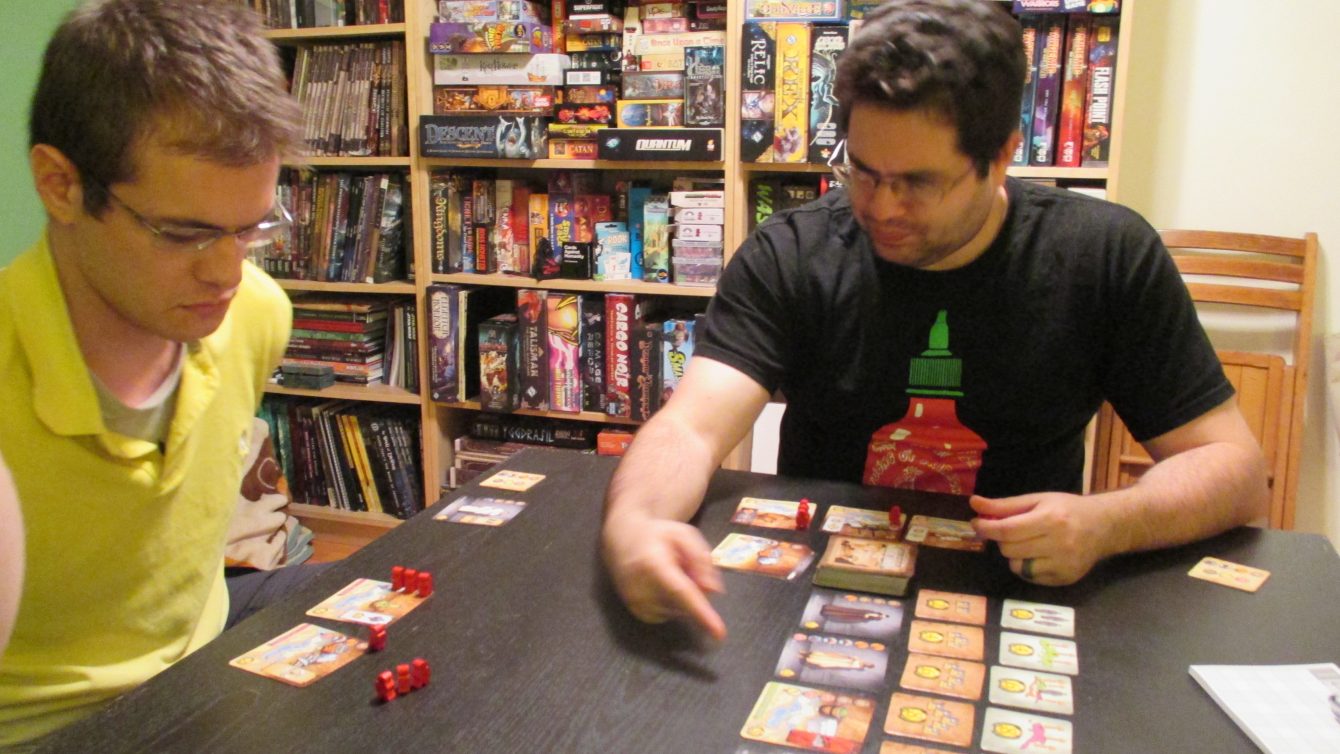 This time around, Gameosity takes a look at Augustus from Hurrican Games.  Taking command of a legion of Roman centurions, you will pit yourself against your fellow commanders to expanding your territory and gaining influence in the Senate.  But what does this game have in common with your grandmother’s bingo league?  More than you might think and, against all odds, that’s a very, very good thing…

“Greetings, legionnaires.  On this day, in the name of the Emperor himself, I salute your bravery and tenacity.  You are Rome’s finest, who, with strength and honor and battle-hardened skill will march out in the name of our great Emperor, for the prosperity of Rome!  There is land, foreign and beautiful, which needs to be held, as well as civil work here in the capital, in the senate chambers themselves.  All around us there is the opportunity to rally the strength of our empire and grow our greatness!  For glory!  For Rome!

I know each and every one of you is eager to being your mission, to expand our territories and bolster the influence of our great senate.  And believe me, you will each be called upon to do your part.  But first, there is one thing which we must do…

And that, my peerless Roman warriors, is reach into this tiny black bag and figure out just where the heck I can send you.”

Augustus (alternately known as Rise of Augustus) is one of those games which, when you describe it, may not sound like a great time.  I know that’s sort of an odd way to open a review for a game which I really quite like, but the truth is that every time I take Augustus out for a bunch of new players, in my desire to quickly encapsulate the game in an easily accessible way, I inevitably say some variation of ‘It’s like bingo, but with quests’. That gets some…odd looks. Which is fair, I guess, because it sort of evokes images of church halls full of grandmothers in centurion helmets, rattling axes against heavy shields and forming war parties hell-bent on invading the congregation next door.  And that’s not what this game is about, though if I think about it, that would be awesome.  Something for my to-do list. But back to what the game actually is about.

Augustus is a game set during the glory days of the Roman Empire.  This era of expansion and imperialism has been the subject of board games since…well, probably since a bunch of guys from the Italian peninsula started wandering around Europe and Africa, stating rather firmly that they owned everything*.  Often, these games are deep, tactical, and incredibly granular, allowing players to feel like either grim-faced generals on the war-march or clever politicians, manipulating the flow of wealth and favor in order to rise to greater and greater heights of power and prominence.  Most of the time, a game about Imperial Rome is a game of deep tactics and grinding, painful decisions.

*I assume this to be a 100% historically accurate assessment of how the Roman Empire was founded.

Augustus…isn’t that kind of game.

In Augustus, each player controls a tiny legion of little wooden Roman legionnaires.  And each turn, players will deploy these legionnaire meeples (legioneeples?) to one of the objectives which they are working towards, either seeking to gain influence over senators in the Roman government or power over one of the many territories of the empire.  Each of these valuable people and territories is represented by a card, and each player works  on completing their own cards – there isn’t much in the way of direct competition.  Cards show between 2 and 6 symbols to which a legionnaire can be deployed, and once all the symbols on a card have been covered, that card is scored and another objective card is drawn.

“Hold fast, my stout-hearted warriors!  Our objectives are now arrayed before us!  We need but wait for orders and we will surge forth to claim our right as Romans!”

One player serves as the ‘town crier’, drawing tokens from a bag one at a time.  When a token is drawn, all players are free to place an available legionnaire on the matching symbol on one of their objective cards.  Some symbols are more common, and are therefore present in greater number in the bag, while others are quite rare.

Once the last symbol on your objective has a legionnaire assigned to it, you yell ‘Ave Caesar’ as loudly as your friends will tolerate and then move on to the scoring phase.

Yes, you really do shout Ave Caesar, because once a card scores, the game is stopped while the scoring player makes several decisions – they must choose which objective they will claim to replace the completed one, check to see if they qualify for any of the bonus points available, and decide whether they are going to claim a token from the ‘gambling row’, which are worth victory points but can only be claimed once per game.

A shield is drawn!  Form rank, fellows of the legion!  Mother Rome calls us towards victory!

Should it happen that multiple players complete an objective on the same draw (which will most often happen on the ‘wild’ token), all players who have simultaneously shouted Ave Caesar simply compare the number of the objective they have completed, and resolve them from the lowest to the highest.

“Be wary, blood brothers of Rome!  A chariot is drawn!  Surge forward!”

And from a very basic perspective, that’s why ‘bingo with quests’ works as a synopsis.  Someone draws symbols, you place tokens, and when you have enough tokens you shout ‘Ave Caesar’ (or ‘Ave Bingo’, as may be the case).  Once someone completes their 7th objective, the game draws to a close, points are tallied, and a winner is declared. Really, it couldn’t be more simple.

“Another Chariot falls before us!  Soon, my brethren, soon we shall claim the final catapult and with it, ultimate victory!”

Except it isn’t that simple. Every objective in the game awards points, but most also have a secondary ability, granted upon completion.  One objective might let you treat one symbol as another, giving you more flexibility in completing future objectives.  Others let you shuffle around your already deployed legionnaires, or create score synergies between objectives, or allow you to gain or assign bonus legions.  So, despite being a luck driven game…

“Just one more catapult!  It’s only a matter of time!”

…there is definitely an element of tactics involved.  It may be worth it to complete a far lower-point objective in order to gain its ability, or it may be smarter to drive towards completing a certain type of objective over the rest, if you grab a card which multiplies the point value of those territories.  There are even attack objectives, which, once complete, will force every other player to withdraw some legionnaires or even lose previously scored objectives (we call those the ‘jerk’ cards at the game’s outset, though we tend to use much more colorful vocabulary as the game goes on).

So there really is a lot to be considered, despite the fact that gameplay consists of little more than drawing tokens from a bag and placing meeples on cards.

“Damnation!  Not another Crossed Swords!  We need but a single catapult to secure our victory!”

Add to the tactical consideration of which objectives to work on the fact that you only have 7 legionnaires to start with, and soon every token draw will turn into a head-scratching game of cost/benefit as you try to decide, based on what has been pulled out of the bag already, whether it is worth withdrawing legions from one objective to try to complete another.  It is very possible to spend a turn or two chasing objectives which you are SO CLOSE to completing, never quite getting the right deployments at the right time to ever actually score any of them.  Likewise, you’ll be gnashing your teeth in frustration as you give up on a nearly complete objective and the very next draw sees the symbol you have been waiting three turns to grab.

“Any moment now!  One catapult!  Here it comes!”

Augustus is random, which many board gamers (though not myself) consider a dirty word.  But there is a sense within its randomness – probability which can be followed in order to guide your choices from turn to turn.  Add to that the tactical nature of objective choice, order of completion, and scoring synergies, and you get a game that has way more meat than you might first expect, but which is absolutely an introductory, entry level game for just about anybody.  And that is a fantastic thing.

“Just one catapult.  Stand fast, my brothers!  Seriously, I have no idea what the holdup could be.  There are, like, 3 in that bag.  I mean, statistically, we should have drawn one by now…”

Augustus scales beautifully, playing as well at 6 players as it does at 2, with the sweet spot being somewhere in between.  Its mechanics are simple but its mentality isn’t, making it appealing for both novice players and more experienced folks looking for a relatively quick fix.  No, it isn’t a war-gamer’s Roman Empire game, but with quick gameplay and fun (if not especially deep) choices, it’s certainly an excellent addition to the collection.