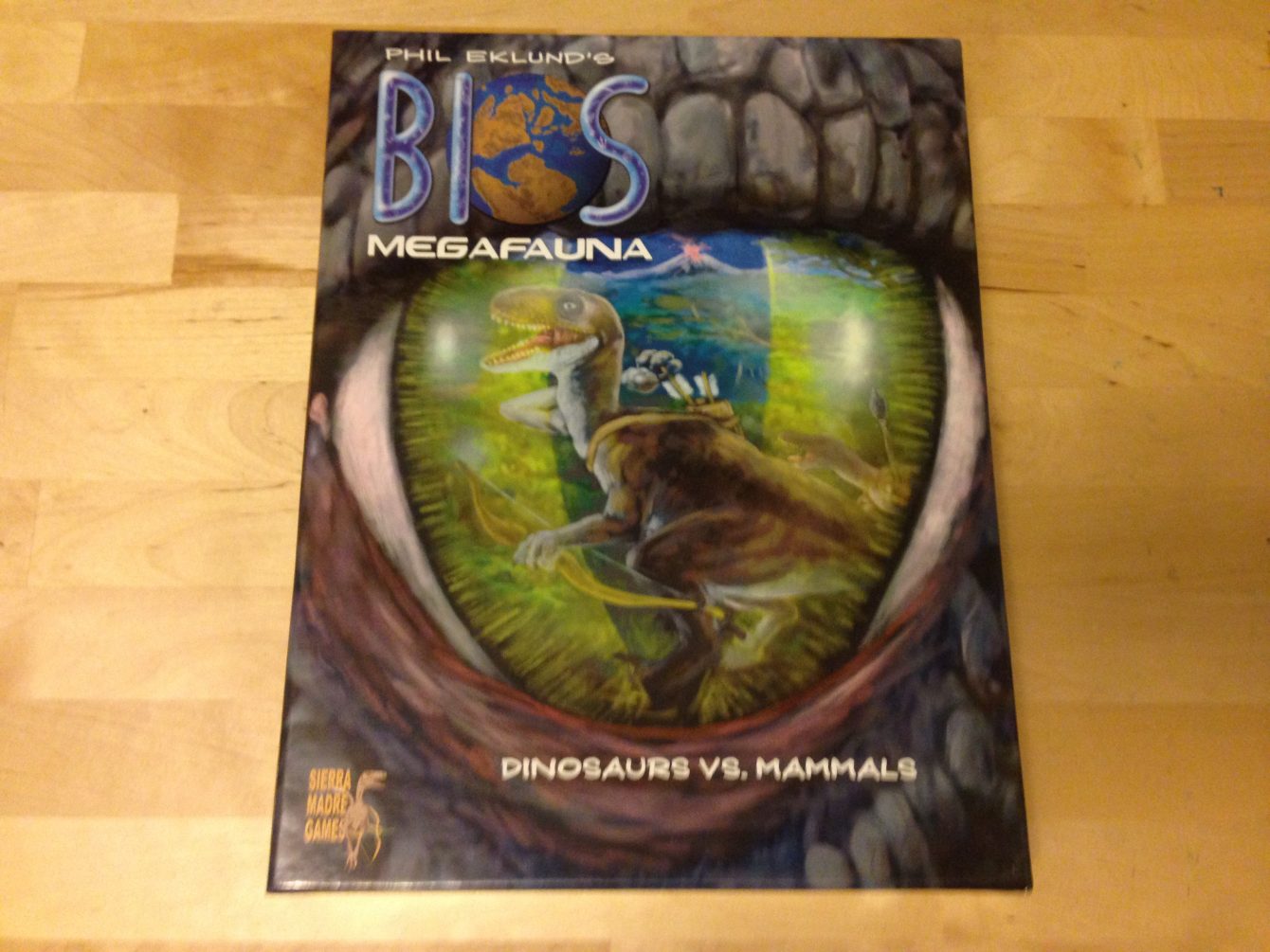 Today, Gameosity examines Bios Megafauna, a game that has been described as “An exciting experience in creating new and awesome creatures who must somehow survive a capricious and ultimately dangerous primordial Earth” (by Rob) and “A convoluted pile of letters and numbers, arcane in their meaninglessness and hideous in their presentation” (by Andrew).

We’re just a bit divided on this one.

Come see who wins this debate, literally millennia in the making!

Bios Megafauna is the type of game that you can be certain won’t win over everybody. It’s not much of a looker, the rules are complicated to figure out (although not as bad as High Frontier), and even explaining it can be a chore. That said, it’s also a pretty great game once you get past that (admittedly sizable) barrier for entry.

Players assume control over a blank slate of an animal species, either dinosaurs or mammals, and try to evolve them and spread across the planet in a manner that has them in the majority by the end of the game. However, with turns taking place over centuries and the environment in a near-constant state of flux (as well as all of the players’ creatures), that’s much easier said than done.

I adore it. Andrew, well, not so much.

Andrew: ‘Turns taking centuries’ indeed.  Why this game?  What engages you so much?

Rob: For me it’s the theme. Dinosaurs, evolution, and the way in which it’s got that chaotic weirdness Galaxy Trucker has. I love how, from turn to turn, it doesn’t matter if you *think* you’re ahead because that could change in an instant. I really enjoy that mechanic, even though I usually get screwed by it.

Andrew: I don’t know, it just feels massively arbitrary to me.

On any given turn, one of several actions are available: buying a DNA card, changing a species’ size, teaching your species a new technology, migrating, and evolving a new species off of an already existing one. Ultimately, though, all of a player’s actions are geared towards species proliferation – the only metric that truly matters.

And that’s Bios Megafauna in a nutshell: evolving new and bizarre species in order to spread as many creatures around the world as possible. The more environments they can inhabit, the greater the chance for victory.

Andrew: It’s not that the theme isn’t interesting. The whole ‘evolve to thrive’ thing is cool, and I like how the planet’s shifting changes things and that the board isn’t stable from one turn to another. But it’s hard to get emotionally invested in a game that’s just like “Okay, I’ve made the best choices that I could possib-oh, no, wait, the weather changed and now everything I have built is dead.”

Rob: The thing is, that might happen and it might not. It’s the same for everyone – everybody has the same advantages and disadvantages.  You have to roll with it when things change – evolution favors those who adapt!

Randomness of the environment aside, Bios Megafauna actually uses a pretty clever collection of gameplay mechanics. Biome tiles have a somewhat imposing but ultimately very clear series of letters to denote what DNA is necessary for a creature to survive on them, and knowing when and how to place them on the board is a simple matter of following the icons and replacing the lowest number.

Rob: It’s ugly as sin. I’ve said it before: it looks like a demented Periodic Table.

Andrew: Which is funny because I have a game where the scoring is on a Periodic Table and it’s a whole lot prettier than this.

Rob: But I really like the idea behind it. I like the idea of creating these bizarre evolutionary nightmares, and being able to acculturate them with different traits like bone-cracking or tool use that can give them permanent abilities.

Andrew: Yeah, as soon as my plague of locust-lizards threatened to evolve tool use… that’s a pretty nightmarish scenario right there.  Also, ‘acculturate’ is a great word.  Well used.

Rob: Thank you. That’s really what it’s all about for me. I like the idea of creating these crazy creatures. And I’m a really big fan of the mechanic that gives you a specific amount of pieces for each species, and once those pieces run out you can’t migrate any further.

Andrew: I agree that’s a truly inspired piece of game design. Like that point in the game where I made myself nocturnal.  I had to put one of my meeples on the ‘nocturnal’ track and now I’m not using that for anything else – one less chance to propagate.

It can certainly be a harsh and even occasionally finicky game, but the biggest issue is typically how the rules are written. There’s lots of talk of “predator DNA” and “herbivore DNA” and “genes” and so on, to the point where it’s bound to turn some people off. This is why it’s very important to remember one specific rule: it’s all about matching letters.

Andrew: Ugh, those rules.  Even having you explain them to me was painful the first time.  Granted, the second time, when you filtered out everything above a 5th grade reading level, things made a lot more sense.  But still.

Rob: Well, I adapted to my audience.  Just like your creatures have to adapt to-

Rob: Pft, fine. But yeah, I think the rulebook is far and away the biggest issue with the game.  They should have just started with ‘Match the letters’!  This is evolutionary biology; no need to make it tedious or complicated, right?

Andrew: Hah. The irony being that, as you become more comfortable with the game’s systems, it becomes easier to get excited about these weird combinations rather than look for opportunities to optimize. I’m not just sitting there like “I like tokens, so I’ll take the card that has the most tokens on it.” It’s like, “Now I’ve got cheek teeth and I’m super-speedy and have tentacles!”

Rob: It always comes back to tentacles.

Andrew: What is with that, man?

Another aspect worth noting is that Bios Megafauna can play between one and four players. In a solitaire game the player goes up against a single species of (extremely prolific) herbivore using a few simple preset circumstances and a basic list of simulated behaviors. Conversely they could just go it alone and see if they can survive the planet’s onslaught. However, in a game with multiple players, everyone is basically vying for the most spaces on the board.

Andrew: What I thought was really interesting about our playthroughs was that there were very rarely moments where it was You versus Me.  Considering this is essentially an area-control game, that was surprising.

Rob: Right. Even during contention over space, the only way you can really affect other players is by taking cards that you think they want. But I don’t like the idea of doing that because you’ll potentially just trap that player on their home tile and nothing will happen, which is boring. Plus you’ll end up wasting turns that you could’ve spent improving your own creatures.

Andrew: And what’s really unique about this game is that prey/predator mechanic. If you move a predator into a biome where there’s an herbivore, you’re not knocking them off the board – you couldn’t exist without them! And the only way they can really get rid of you is to out-evolve you, but then you’re potentially losing cards.

Rob: Exactly, because if you get too big or two small you could end up forfeiting DNA with specific size requirements. Then you might die out or at the very least it’ll make migrating more difficult.

Managing DNA can be even more of a balancing act as the more letters you attach to your species the more prone they are to dying out if a cataclysm triggers – very specialized species are more vulnerable. Incidentally these cataclysms will also affect the game by creating massive environmental changes, including the formation of new oceans, possibly with the side effect of killing every living thing on the planet.

Andrew: I think it’s really interesting that the planet can kill you long before the end. Ultimately, that’s a great choice on the part of the designers – you won’t always make it to the end of the game.  That way, no one feels completely safe.  You make the best choices you can, and then brace for impact.

Rob: And that ties into the fact that there are so many cards in this game you’d never use them all in one sitting.  So what came up was purely the luck of the draw – this time, all the greenhouse stuff just kept dropping the temperature and pushing the biomes to the south until we ended up on a giant ice ball.  But it could have just as easily turned the planet into an inferno.

Andrew: It’s just a reminder that the planet doesn’t care about you. It’s not out to get you. It’s just marching proudly towards dying out and becoming a star or something and you are, in the words of the late great George Carlin, you are “a surface nuisance.”

Andrew: Ultimately I feel that this game would be a disaster with four players because your ability to plan from turn to turn would be so minimal that I just… I just don’t know.

Rob: I dunno. I feel like that wouldn’t happen because you’ve got the whole ecosystem thing with the predators, herbivores, and scavengers. More players on the board would actually mean more places to potentially put a carnivore, for example.

Andrew: Fair enough.  I still have my problems with this game, but my opinion has softened after more playtime. The way it came off the first time was so convoluted and self-important. The game has a lot fewer moving parts that it seems like it has, but it’s definitely not a gateway game and isn’t going to appeal to everyone by any stretch.

Rob: But… the cover’s got a velociraptor with a bow and arrow! That’s badass!

Andrew: Well why didn’t you start by showing that to me?

Andrew: I don’t look at things!

Rob: You look at covers! How else do you judge things?

It bears repeating that Bios Megafauna is definitely not a game for everyone. However it has a balance of strategy and randomness that we actually really appreciate. It keeps everybody on their toes because every single player is at risk equally.  It may not be everyone’s cup of tea, but if you can weather it’s rulebook and crack into the game underneath, you may find a unique gaming experience you will enjoy.

Rob: Just like how my squid-owls had to evolve bone-cracking to get at the-