Visit the Valley in Android: Netrunner’s new expansion, Scandal hits the Ticket to Ride Championship, one man with a plan makes a Castlevania board game worth drooling over, and check out the release of a fun little pub game, Pairs.

The Valley, is the first Data Pack in the SanSan Cycle for Android: Netrunner set in the megacity of SanSan that stretches its silicon fingers across the Californian coastline from San Diego to San Francisco. The X-Pack is a complete playset that comes with sixty cards of tech startups, bioengineering, and the J-Plex, Jinteki Corporation’s flagship American R&D facility.

Jinteki Biotech dominates SanSan with its work in genengineering. Even the megacorp is malleable with a new card play style that gives the company different profiles that can be swaped with other identities or flipped to activate different abilities.

I’ve played a bunch of Netrunner and usually I like to play the hackers, but the powers of the Jinteki Company are fascinating. I can’t wait to see how this plays.

You can read more about Fantasy Flight‘s Netrunner X-Pack: The Valley on their blog.

Amidst Cheating Scandal, Day of Wonder Crowns a New 2014 Ticket To Ride Champion!

Days of Wonder held their Ticket to Ride World Championship tournament in Issy-les-Moulineaux near Paris, France this year. The 28 National Champions, who won out over the 25,000 contestants that participated all over the world, played in head to head games to determine the final champion. Originally Erwin Pauelsen, was named the winner, but after a scandalous reveal by fans who followed the tournament live on the internet that there were “irregularities” in the game, Pauelsen resigned his title. Day of Wonder has announced the new grand champion is Kenneth Heilfron of the USA.

Wow, cheating at Ticket to Ride. That is just not cool. I heartily congratulate our home country champion, Kenneth Heilfron. Yay!!!

Check out more about the Ticket to Ride Championships on the Days of Wonder Blog.

When a Vampire Comes Along, You Must Whip It… Redditor, XsimonbelmontX, Whips Up a Castlevania Boardgame.

XsimonbelmontX is a redditor with the Board Game design bug.  He has come up with a home-made original game based off of Nintendo’s Castlevania. It’s a co-op game that follows the basic story of Simon’s Quest with a few surprise characters from later in the series. XsimonbelmontX included 11 playable characters with unique powers. The main task is for everyone to work together to collect up the parts of Dracula that are laying around the castle, resurrect him, and then kill him all over again.

I have to say, I am super impressed with how much work XsimonbelmontX put into this homebrew game. There are a ton of components and they all look really well made. I would love to see a game like this made official and produced for sale.

This isn’t XsimonbelmontX’s first video game to board game adaption either. He designed a gorgeous Fallout game that I desperately want. You can check out more of his work on imgur and read his post about the Castlvania game on Reddit.  And I’m not the only one around here who’s excited about-

JUST SHUT UP AND TAKE MY MONEY!  IF YOU MAKE ACTUAL CUSTOM DICE FOR THIS, YOU CAN HAVE ALL OF MY MONIES!!!

Cheapass Games‘ imprint Hip Pocket Games has released their Kickstarter success story, Pairs. According to Cheapass Games: “It’s a simple, fast, and addictive little card game using just the numbers 1 through 10 in a triangular distribution: 1×1, 2×2, 3×3, and so on. You’re trying not to get a pair, so the bigger the number, the more likely it is to catch a pair.”

The game has several ways to play and a multitude of themes. It looks like the kind of thing I could easily toss in my back pocket or a small purse to bring along for those spare moments when my pals need something to do (like between turns in Risk). 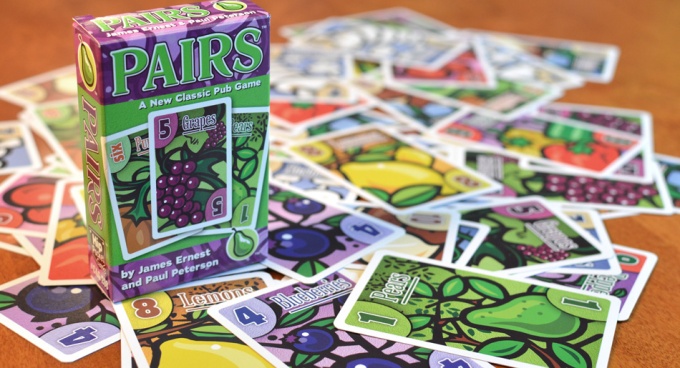