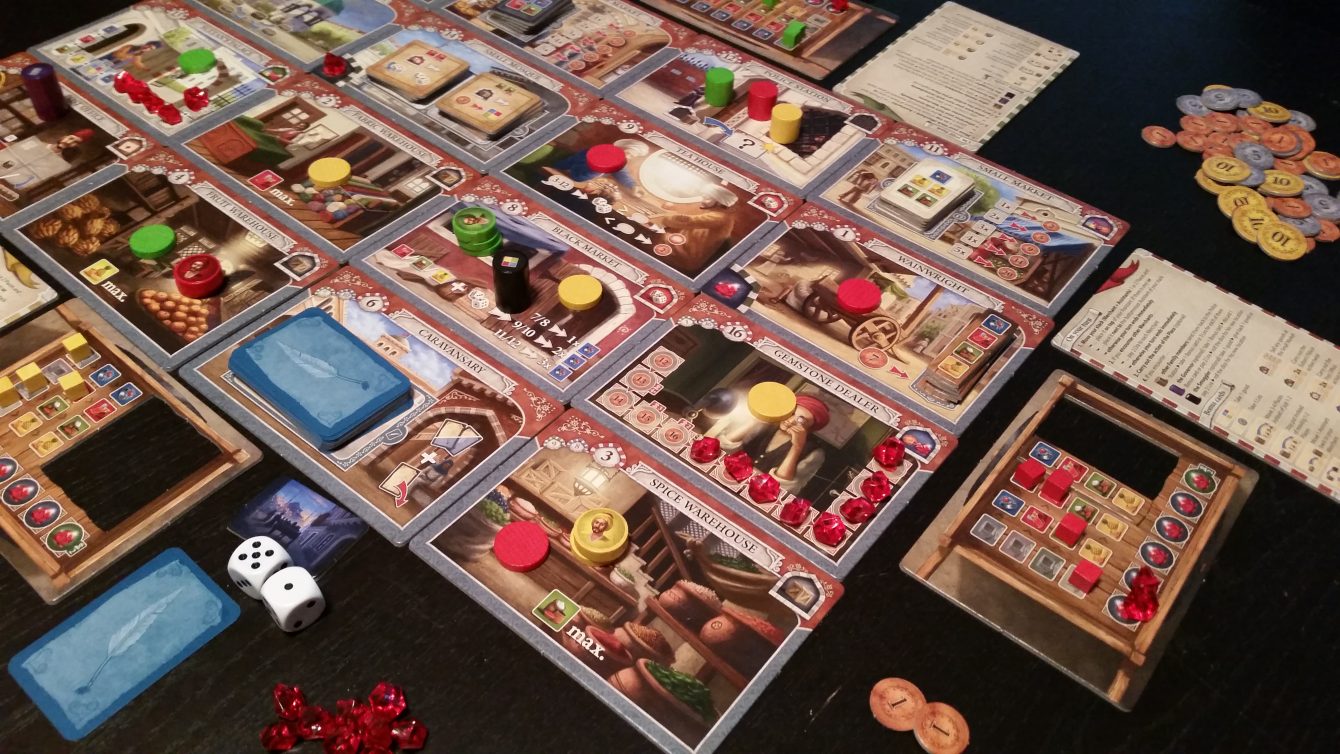 Today, Gameosity takes a look at Istanbul, a rather fantastic worker-placement game released by Alderac Entertainment Group*.  Fair disclosure – I’m personally a huge fan of this one, so this review is a bit biased by my appreciation for it.  On the other hand, I couldn’t find someone to talk crap about it to counter me, so, uh, I think that says quite a lot, actually!  Still, it’s a game that both is and is not as simple as it first appears, so join me as I take a deeper look at a game I was sold on from the moment I started playing my first turn.

*Also, there is apparently a song which talks about a similarly-named city that was formerly called by another name entirely and ruminates on some of the consequences of that change in nomenclature.  I will not be singing it at any point during my review, I promise.

“You there, new kid! You’re late!  When I agreed to let you work for me, I did not do so with the intention of having you stroll in well after sun-up, as though the Sultan himself were your uncle!  You are on my payroll now, so act like it!  Come come, my young and likely exceedingly temporary assistant!  All the riches of Istanbul wait but to dive into our coffers!  Which is to say my coffers.  Now grab the cart and don’t tarry!”

Istanbul sees players taking on the role of merchants in the titular city, making their way through the alleys and markets, buying and selling goods in order to gain favor and coin and, ultimately, precious rubies, which serve as the game’s victory points. Istanbul plays between 2-5 players, scaling quite nicely to fit any sized group, and usually plays in less than an hour.

Each turn, you will move your merchant, with his pile of assistant tokens in tow, to various locations around the grand bazaar.  Movement is orthogonal across the tiles, which can either be placed sequentially or randomly to generate new layouts for each play.  Every tile has an associated action, allowing you to receive goods, sell them for lira, exchange them for favor, gamble, gather bonus cards, or acquire precious rubies, which are the key to victory.

“Behold, the grandeur of the bazaar! You are new to this jewel of a city, yes?  I can tell – you seem bewildered by the spectacle before you.  Fear not, for I shall be your teacher as well as your employer, and I’m quite certain, if you work hard and follow my directions, it won’t be too long before you have a cart of your very own!  You’d like that, eh?  Yes of course you would, my excessively underachieving assistant.  Now come, we must be off to the fruit warehouse, so that we can then make a trip to the Great Mosque – I hear they are in need of fresh produce, and if we make it there before my irksome competitors, I’m certain we’ll have an easier time selling!”

Every time a merchant stops on a space, he may deploy one of his assistants to conduct business there, thereby taking the action associated with that space – gaining goods at warehouses, for example.  However, the merchant must then leave that assistant at that location when he moves next turn, presumably to conclude whatever paperwork was generated by the business conducted.  That means that a merchant’s pile of assistants is ever-diminishing, and can only be replenished by manually backtracking over previously-used assistants or by returning to the fountain tile, which summons all assistants to him.

This means that a lone merchant, no matter how financially savvy, is functionally useless without his assistants to do the heavy lifting.  Aside from being a scathing take-down of capitalism (or something?), it also means that players will not only need to be clever in their purchases to accommodate the ever shifting proclivities of the markets, but also strategic in their pathing in order to ensure that, as they get farther and farther from the fountain, they do not strand themselves without assistants and therefor the ability to take actions.

“A new cart can only lead to greater profit!  However, it seems to me we find ourselves lacking in a few essential goods, difficult to come by through traditional means.  Follow me, but keep quiet as you do – where we go now is far from the open commerce of the bazaar, but no less vital to the city’s inner-workings.  Keep your tongue in your mouth and your eyes on our bags, for this market is not so friendly…”

To classify Istanbul as a worker-placement game isn’t quite right.  It certainly has workers, and you certainly do place them, but ultimately your success and failure have as much to do with your strategy of movement as they do with your choice of goods.  Also unlike many worker-placement games, you are all racing to achieve the common goal of collecting 5 rubies (6 in a  two-player game) first, rather than trying to be the one to score the most coins or points.  And in one of the biggest departures from nearly every worker-placement game I’ve played, sharing a space with an opponent is always possible in Istanbul – but it will cost you, as you pay a few lira to the other merchants for the pleasure of their company.

There are several ways of acquiring rubies, several of which start relatively cheap and only become more difficult as players use them – each ruby acquired from the Sultan’s Palace, for instance, makes the subsequent ruby cost even more goods.  That way, it is critical not only to plan your purchases around the routes you can easily take, but also to do so before your competitors buy up the cheapest gems and bonuses, making your task that much harder.  In that way, Istanbul is a bit of a race and a pathing strategy game, as well as a worker-placement game.

“Hm…I see our numbers are thinning.  Before we go back to the fountain to gather your fellow, ultimately replaceable cart-wranglers, there is one last stop I’d like to make.  You see, there is business I would have done across town – however, I owe some small debt of lira to other merchants there – a pittance, really, but I see no reason to sully this day with such a chore.  I do have a cousin I can call upon to make such a journey for me – he is quick and efficient, as well.  However, he is, shall we say, of a certain moral fiber?  I think I know where we will find him, but be sure to avoid mention of it around the other assistants – it would embarrass us all.”

Istanbul is a rare game – it’s a worker-placement game where your worker doesn’t displace others.  It features multiple paths to victory, all roughly commiserate with one another.  It allows for smart player contention without any mechanisms where a player can become shut out by his competitors, and no space on the board exists where you don’t get at least something for your time there – even gambling at the tea-house is guaranteed to generate a little profit, if not much more.

One of the criticisms I could levy against Istanbul is that there is very little in the way of catch-up mechanisms – for instance, as a player earns upgrade tiles from the game’s two mosques, not only do they gain useful abilities, but the price goes up for subsequent players to acquire them.  Therefor, a few successful early turns and smart pathing can make a player very difficult to catch.  However, there are enough options on the board that it is entirely possible to switch strategies mid-game quite successfully, allowing for exciting come-from-behind potential.

All in all, the reason I love Istanbul as much as I do is because it is a game which encourages you to come forward and participate.  Sure there is probably an optimal path to victory, but ultimately you have plenty of options as to how you get there, and it isn’t possible to get stonewalled completely by your opponents.  It isn’t a gateway game precisely, but it is inviting and comprehensible while being engaging and entertaining, offering something for the casual and the hardcore alike.

Simply put, Istanbul is a smart investment for anyone in the market for a profit of fun (ok, that’s enough merchant puns for one sentence, I’m sorry).

“Ah, another fine day of trading.  You did well, my appropriately quiet assistant.  Perhaps tomorrow we shall head to the large market, where I will teach you all there is to know about turning these meager goods into piles of lira!  Now, I will retire to the tea house – be sure you are waiting with the others at the fountain tomorrow morning, and not a moment after sun-up!  Oh, and welcome to Istanbul, my young friend!  I’m sure you’ll love it here!”