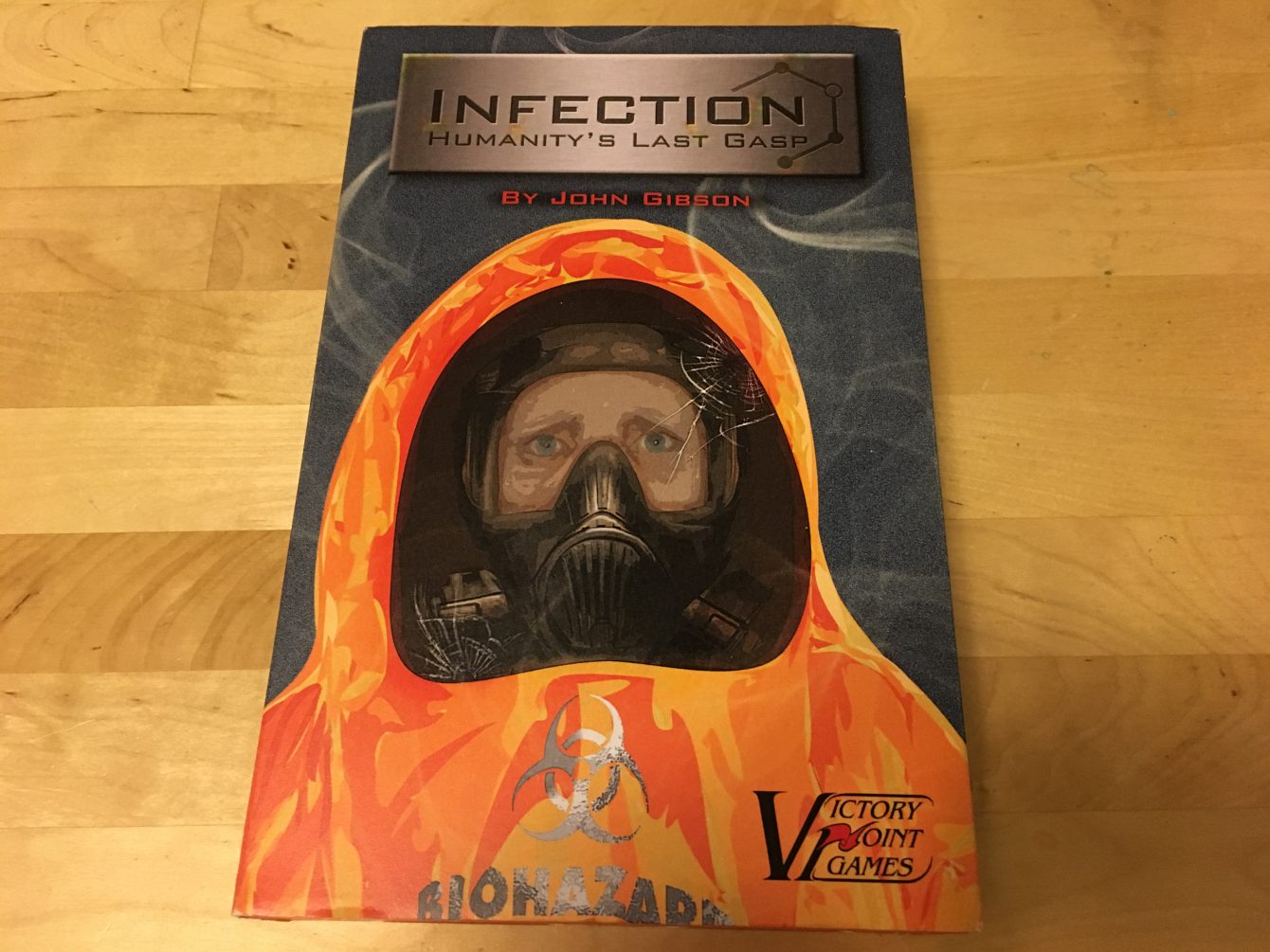 Today, Gameosity studies Infection: Humanity’s Last Gasp from designer John Gibson and publisher Victory Point Games. It’s a solitaire-only strategy game where you run what’s essentially a branch of the CDC (Center for Disease Control) in New York and try your best to research a cure for a previously unknown and incredibly lethal virus.

A traveller by the name of James Franklin apparently did something he shouldn’t have while he was visiting the Congo and has unwittingly become Patient Zero for a virus that very well could wipe humanity off the face of the Earth. This “Morbusian” virus is something of a nightmare: it doesn’t seem to be affected by modern medicine in the slightest, it’s extremely deadly, and it’s always mutating, which makes research incredibly, almost unfairly difficult.

You and you alone, acting as the director of the Department of Plague Control (DPC), must figure out the best way to use the resources at your disposal to eradicate the virus and save the human race. You’ll be hiring scientists to aid you with your research, purchasing and utilizing lab equipment, and dealing with all sorts of unexpected events that could hurt or help your progress. So yeah, no pressure.

I’m kind of split on how I feel about the physical components of Infection, to be honest. I enjoy the artwork on the cover, the tokens, and the board, but I’m not really a fan of the Photoshop filter-looking portraits for individual scientists. And while I really like how well the different event and lab cards work, they look a bit bland – that and I wish they were printed like more typical poker cards rather than feeling like thicker than usual index cards.

Two different game boards are included as well, identical aside from their physical construction: one very thin (almost like it’s on poster board) folding board that’s already showing wear on the seams even though I’ve never used it, and a surprisingly well-made “puzzle board.” I’d have preferred a regular board, but the slightly denser board that comes in five pieces works quite well. Whichever your choice, both boards have a “Bacterial” (i.e. easy) side and a “Viral” (i.e. hard) side. Then there are the tokens, which are gloriously chunky and solid but are covered in this sort of black powdery residue (as I understand it this is an issue with all VPG games due to the process they use to cut out their token sheets). It wears off after a while, but those first few games left me looking like I’d just leafed through a dozen newspapers.

You should understand upfront that, despite the theme, this game has nothing in common with Pandemic. It’s not you and your friends traveling the world in a desperate attempt to squash several deadly outbreaks; it’s you, by your lonesome, toiling away in a lab and carefully monitoring your budget as you attempt to synthesize a cure for one of the most awful plagues in existence. And it’s one of the most tense board games I’ve ever played.

The virus is represented by several different (lettered) molecules in a petri dish. In order to win, you have to make all the molecules go away. And the only way to do that is to harvest the right protein tokens from the incubator (a random set of four replaces whatever’s left at the beginning of each turn). Of course it’s nowhere near as easy as it sounds.

Event cards also come up at the beginning of your turn, and can do anything from help to completely torpedo your plans. Sometimes the virus will lay dormant, but other times it might mutate by adding more molecules or replacing existing ones (that’s the worst). Occasionally vital lab equipment might fail, or maybe one of your scientists will have a breakthrough and you’ll be able to harvest more than just two proteins this time. Of course none of that matters if the Death Toll climbs too high, and some events will almost guarantee it.

It’s moments like this – from about the halfway point and beyond – that succeed in making Infection one of my favorite solitaire games, and (as I’ve mentioned before) one of the most nerve-wracking board games I’ve ever played. You might think you have a handle on things, but then the virus mutates and that E molecule you’ve been studying gets replaced by a K. Then one of your doctors becomes incapacitated for the turn so you won’t be able to use them to access a second piece of lab equipment. Then the one piece of lab equipment you do use fails, because you were too cheap to buy the upgraded version. Finally, because you couldn’t remove the E that is now a K you get a -1 to your Death Toll dice roll at the end of your turn, which is actually a -3 because it stacks with the even card’s effect.

And I’m totally okay with that, because it makes those times I’ve managed to just barely squeak by right before the Death Toll reaches apocalyptic proportions unbelievably satisfying. Doubly-so when playing on the far more difficult Viral side of the board, where you only earn more money by successfully eradicating pieces of the virus, and the relatively easy to study A, B, and C molecules are replaced by the far more complex M, N, and O molecules.

If you’re a fan of solitaire games, and especially if you like a challenge, I can’t recommend Infection: Humanity’s Last Gasp enough. It does an awful lot with surprisingly little, and still manages to get my heart racing every single time.