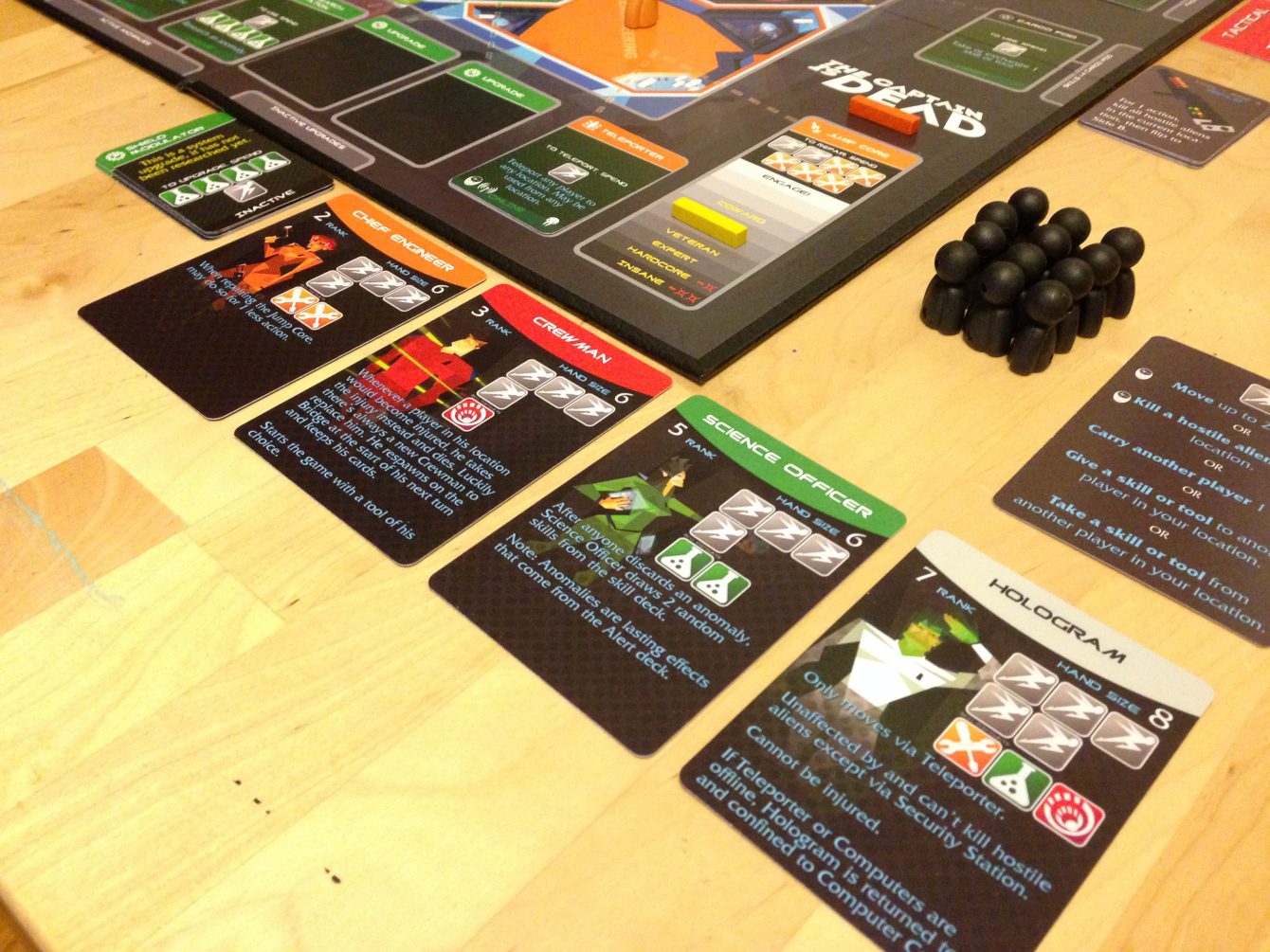 First Officer’s log, galactic date 20141118.  We have been moving through hostile space for days now, on a mission of the utmost importance.  So far, we have traveled without incident, having successfully evaded detection.  However, all that changed less than an hour ago, when several enemy warships were picked up by our sensors, converging on our position.  And as the first shudders of weapons-fire ripple across our shields, I find myself running like mad to the bridge, hoping I can hold things together until the Captain arrives…

Ensign:  “Shields are barely holding sir, but we have two warships off the starboard bow, engaging in flanking maneuvers!”

Science Officer:  “Sir, I’m detecting multiple anomalous readings on the external sensors – I think we may be passing through a gravity well!  We can expect considerable difficulty in moving – ”

Telepath:  “Everyone!  I can sense multiple hostile consciousnesses within the ship!  I believe we have been boarded!”

Ensign:  “He’s right, sir!  They’re in the armory.  I’ve got them on internal senso – Damn it!  I’m sorry sir, they cut the feed.  We’re blind down there and torpedoes are offline!”

Weapons Officer:  “I’m on it!  Radio for a security team to teleport along with me to the-”

Teleporter Chief:  “Teleporters are down!  I’m working on it now!”

Ensign:  “SIR, THE WARSHIPS ARE FIRING!”

First Officer:  “We can’t take another hit like that!  Radio engineering and tell them to jump us the hell out of here!  And raise the Captain on the comm!  We need him up here now!”

Science Officer:  “Sir, engineering is reporting that the Jump Core is offline!  We’re dead in the water until they repair it.  Estimated at-”

First Officer:  “Damn it son, just spit it out!  And where the hell is the Captain?”

Ensign:  “It is the Captain, sir!  I mean, medical just reported the last wave of casualties…He’s…dead.  The Captain is dead!”

First Officer: “The Captain is…Sweet moons of Mars, that can’t be true!  Damn!  Divert all power to the-”

The Captain is Dead is a very special kind of game.  Made by the Gamecrafter and designed by Joe Price and JT Smith, The Captain is Dead (hereafter referred to as TCID for convenience’s sake) is a game which tries to capture the desperate, thrilling, action-packed moments of any sci-fi space drama, when all the ship’s systems are going to hell, aliens are teleporting in from every angle, the shield is barely holding, and the captain, that last pillar of stability in the morass of panic, is dead.  It does this to excellent, I might even say devastating effect.

A completely cooperative game from 2 to 7 players, TCID claims it will play out in 90 minutes, but we’ve never had a game last that long – mostly on account of getting blown up well ahead of schedule.  Each player takes on the role of one of the (surviving) crew, all uniquely talented and suited for particular tasks.  Each character has a different number of action points, skill discounts, and special abilities, and every turn will be spent fending off aliens, repairing damaged systems, firing torpedoes, and trying, desperately, to get the Jump Core back online.

After each player’s turn, new Alert cards are drawn, advancing from the dangerous Yellow Alerts to the miserable Orange Alerts, all the way to the insanely lethal Red Alerts, none of which I have ever even seen because the Yellows and Oranges are always plenty sufficient to kill us all anyway.

After resolving whatever awfulness the Alerts trigger, play moves to the next ranked crew member, and proceeds until you either fully repair the jump drive and warp to safety (and win!), or (far, far more likely) you either have too many alien intruders, take one too many hits from attacking warships, or draw one of the disastrous Red Alert cards, each of which will abruptly end your game in a flaming mass of spaceship shrapnel.

Thanks to a very successful Kickstarter campaign, there is a ton of variety within each color-coded category of crewmember (way too much alliteration there, sorry).  Each station has 2 or 3 roles, all unique in their attributes and abilities, leading to a fantastic sense of uniqueness.  Playing green?  You get to choose between the Science Officer, the Scholar, and the Cyborg.  The mechanics of each role make them all play differently, despite the common and constant goal of repairing the jump core, and you really have to plan your strategy on what crew you have with you.  What’s great, though, is despite some roles being clearly quite powerful, each one has a valid use and you can pull off some really cool stuff with the right combinations.

Like so many co-op board games, TCID is merciless.  To compensate for the players ganging up against it, the game is vicious, frequently lighting fires all over the ship simultaneously in order to force you to split up and divert from your singular victory condition.  And no matter how tempting it may be to ignore a broken sub-system or neglect an upgrade, there will inevitably come a point when that choice costs you big-time.  In our first game, we were like “Screw the torpedo tubes and the shields!  Let’s just focus on the Jump Co- oh, wait, alien ships just blew us up.”  The Alert deck just seems to know precisely what you desperately need to not happen, and then makes a point of doing that.  Twice.

The mechanics at work in TCID can be summed up in a single word – clever.  To use a few more, I’d call them really, really friggin clever.  Each ship system is depicted by a card placed on the board, and all of them provide some mechanical advantage – external sensors let you see a few alerts ahead (to better prepare), the teleporter allows instantaneous movement between rooms, and the comm system lets players exchange vital skill cards even at range.  When the ship is in good working condition, you and your crew have plenty of advantages and you may be tempted to think success is guaranteed.

However, as systems get damaged you will lose access to those functions, which will actually change the layout of the game board slightly and provide you with less information and resources.  Sure, you can always divert efforts to repair these systems, but that means you aren’t focusing on your jump-drive.  Then again, if your teleporter is offline when you hit a gravity well and your crew becomes unable to walk, well, you may just wish you had taken a turn to fix your tech.

The art direction of the game is truly worth getting really excited over.  With spectacular illustrations from Gaetano Leonardi, the super-stylized characters and environments evoke this amazing combination of old-school sci-fi and (at least to me) propaganda posters, yielding one of the most colorful, aesthetically engaging games in our collection.  When we play, I like to blast chip-tune or straight-up old-school video game music, to up the tension and increase immersion.

Also, please note: The pawns in the pictures here are from my Kickstarter copy.  When the game goes retail in December, you will be getting awesome stickered pawns, featuring unique artwork for each member of the crew as well as the alien invaders!

(As a backer, I had the choice to get these pawns or the avatar ones.  I went with these because I like the aesthetic, but man, I do wish I had the avatar pawns with the artwork.  Silly me!)

TCID is genuinely fun.  It’s challenging, sure, but it’s also exciting!  You and your friends will be cringing with delighted fear each time an alert card gets flipped and the lack of player elimination smartly keeps everyone engaged the whole time.  There is a little potential for analysis paralysis, but ultimately, if your group enjoys working together (win or lose), then The Captain Is Dead is one of those must-have games.

Be on the lookout for this great game in the first week of December, when it should be available for purchase on The Gamecrafter (we’ll provide links as soon as they are up!)

7 thoughts on “The Captain Is Dead Review”