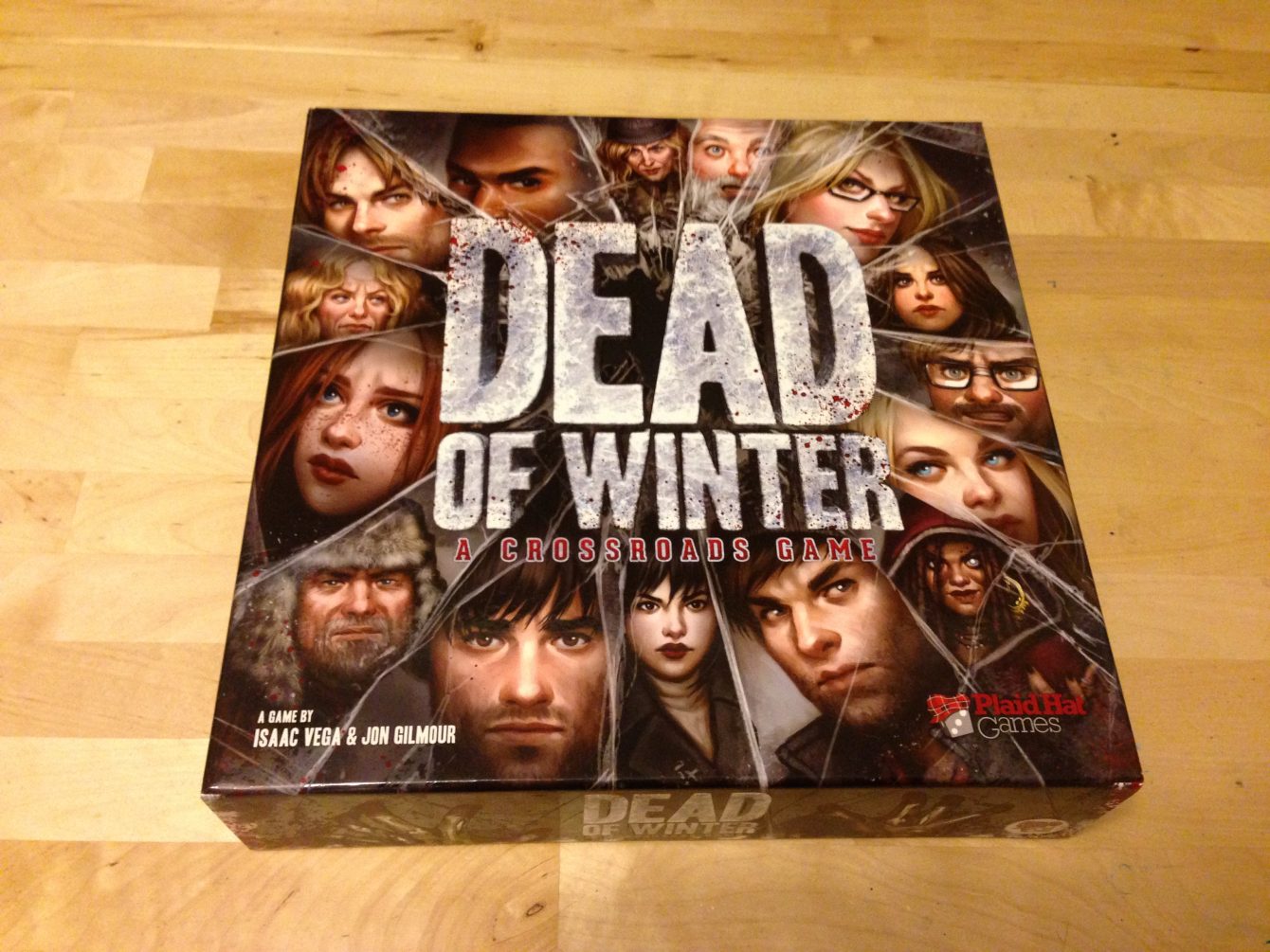 Today Gameosity is trying its best to make it through the harshest of months in the harshest of situations with Dead of Winter. This zombie game that’s not about zombies, from designers Isaac Vega and Jon Gilmour, and publisher Plaid Hat Games, really pushes the theme of a desperate struggle for survival after society has had the flesh stripped from its bones (literally). But is it any-no, wait, forget that. No cliffhangers. It’s awesome and you should totally get it. Allow us to explain why.

Zombie games, zombie movies – pretty much anything with zombies in it is enough to elicit an eye roll or two these days. Even from people who generally don’t mind zombies. There are just too many of them. Heck, even people talking about how zombie stuff is overdone is, itself, overdone.

Right, well, anyway, it takes something truly special for a zombie-related thing of any sort to really stick out anymore. Sometimes it does happen, though. The Walking Dead managed to capture peoples’ attention because it was more about the people than about the “walkers,” and Dead of Winter avoids the typical pitfalls in much the same way.

Yes, you’ll be dealing with zombies in Dead of Winter. A lot of zombies. So many zombies you’ll think you couldn’t possibly run out of the fancy little zombie standees – until you do, and then you’ll resort to placing the little zombie tokens instead. But it’s not about the zombies. Not really, anyway.

Everyone is in charge of their own group of survivors, who are themselves a part of an even larger group that resides in a sort of makeshift colony. You’ll all have to work together if you want to survive the harsh environment – made even harsher…er due to the fact that it’s in the middle of winter and society has collapsed and oh god where are we going to get enough food for all these people??

The thing about Dead of Winter is that everything you do has the potential to be deadly. Not just for you, but for everyone else. Certain conditions and items can reduce the risk a bit, but ultimately there’s nowhere to run and nowhere to hide. You either do your part or you’re dead. Or worse, everybody is dead.

Does that sound a bit intense? Good, because it is. There are so many things for players to juggle, even during the intro scenario – barricades, zombie combat, searching for supplies, feeding everyone, keeping the camp clean, etc – and yes, there are quite a few different scenarios with different starting conditions and completion goals.

There are also random events that may trigger on each players’ turn, courtesy of the Crossroads cards. One of these cards is drawn by another player on the start of your turn, and if at any point the proper conditions are met, you’ll be faced with an event. These have included things like sending half the colony out to search for a missing child, trying to prevent a riot over food, deciding whether or not to allow a wounded survivor to join your ranks (at the risk of them hiding a zombie bite), and a whole lot more. Sometimes they’ll be a massive inconvenience, other times they’ll be a saving grace, but they’re almost always memorable.

On the other side of the coin, you have the Crisis that triggers at the beginning of each round and all players have to deal with. This always-bad thing could task you with providing a bunch of food cards, dumping all the medicine you can find, and so on. So in order to get what you need to handle the Crisis, you’ll need to go exploring in zombie-infested territory to gather vital supplies.

The thing is, every time a character moves or kills a zombie they’ll need to roll the Exposure die. Many have said it’s probably the most awful thing in existence and I’m certainly not going to argue. If you’re lucky you’ll roll a wound and your survivor will only get hurt. If you’re really lucky you’ll roll a blank face and nothing will happen. If you’re less lucky you’ll roll a frostbite wound, which will add additional wounds at the beginning of each turn if you don’t take care of them. And if you’re having the worst day imaginable, you’ll roll a Bite. Bites are the worst thing ever, and will not only instantly kill any survivor that rolls one but can spread to other survivors in the same location and kill them as well.

Oh, but why not just hang out in the colony and let a handful of brave souls go a-scrounging? Because the more survivors you have in the colony, the more food you’ll need to keep them happy – and this is separate from any food needed to resolve a Crisis so, you know, good luck with that. And if you can’t feed everyone morale will drop, of course.

But maybe that’s what you want? I saw how you were picking through the Grocery Store but didn’t provide any food to the supply. A lot of people are starving, probably because of you. Oh don’t tell me you don’t have any food, you were at the Grocery Store! I think I smell a traitor…

That’s another problem you’ll have to contend with: betrayal. At the beginning of a game, all players are given a personal goal at random. And there’s a chance that one of them will be tasked with ensuring the colony’s failure. But since nobody knows who has what goal, the only way to figure out who’s the traitor is to try and piece it together yourselves. Then hopefully vote them into exile, where they’ll be forced to live outside the colony for the rest of the game and receive a new goal that could be even worse for the group. Or you could guess wrong, because oftentimes the non-treacherous goals still seem kind of not great (hoarding food, bringing as many survivors into the colony as possible, etc), which will make morale drop yet again thanks to you getting all freaked out and tossing a bunch of innocent people out into the cold. You jerk.

Dead of Winter is playable with anywhere from two to five players, but three or more (and using the variant that increases the odds of a traitor) is by far the best way to enjoy it. There’s something special about the way in which players are forced to interact with each other when there’s a really good chance that one of them will try to get everyone killed that borders on magical. That’s not to say it isn’t fun with two players (or even solo, if you play the two-player version and either ignore or alter the Crossroads cards), but when you play with less than three people there aren’t any individual goals, which removes all the paranoia and fear of someone screwing the group over at the worst possible time.

If you’ve been considering Dead of Winter, I think it’s absolutely worth your time. It’s a zombie game that isn’t actually about the zombies. It’s at once soul-crushingly oppressive and unexpectedly funny (i.e. a stunt dog wielding a service pistol or a mall santa simply being there in the first place). Most of all, it’s just a rollicking good time.

If you’re interested in purchasing Dead of Winter, you can find it on Amazon right here. Although it’s unfortunately rather expensive at the moment.

5 thoughts on “Dead of Winter Review”