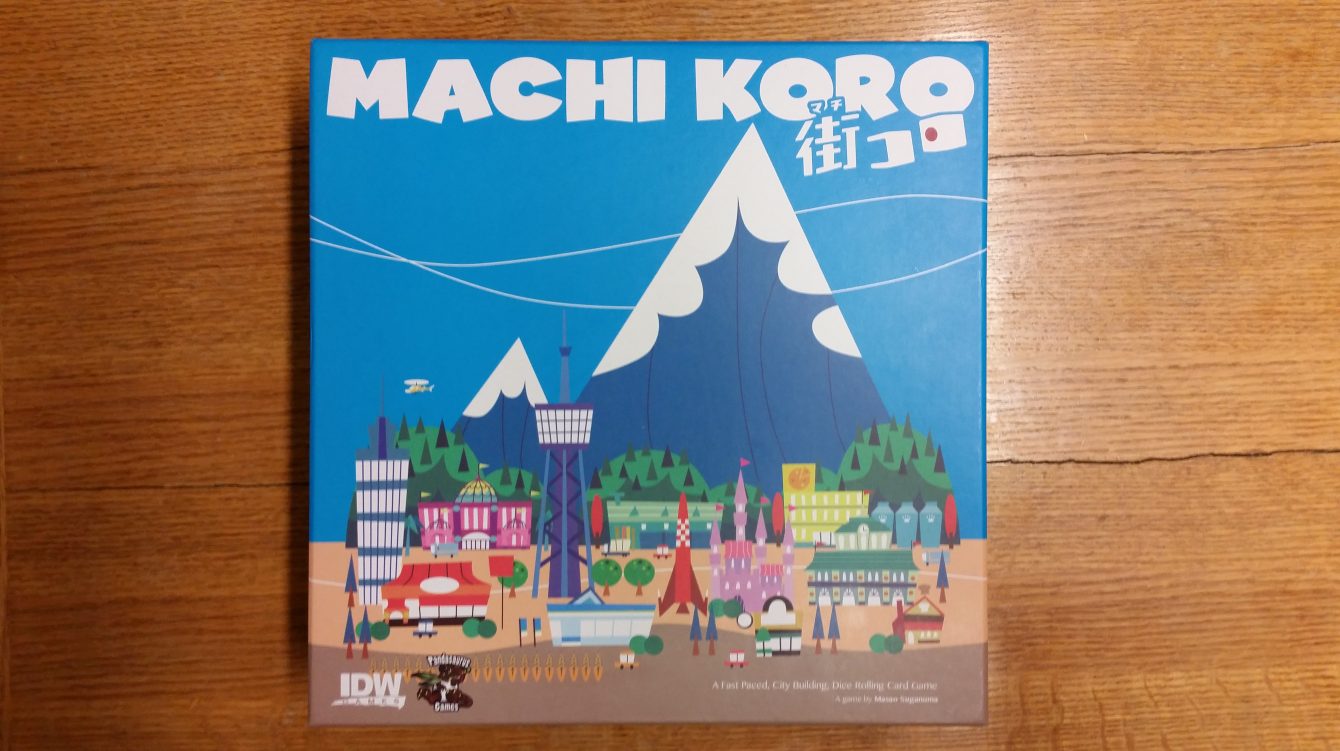 Today, we look at a holiday gift suggestion for the whole family.  It’s a simple game, with really only one mechanic and a very simple set of goals, but it’s fun as all heck.  Some may decry it as being on the casual side, as well as relying on a fair bit of luck and randomness, but there’s plenty of strategy at work in Machi Koro, along with a huge amount of charm and fun besides.

So come on, all you would-be mayors!  Grab the dice and earn some coins, because this one’s a total winner!

Rob: Look, it’s a valid strategy.  All I have to do is roll a 4 and I’ll get coins.  All the coins.  I’ll be buried in them.  I’ll change my last name to Coins.  The bank will have to come see me when it needs coins.

Andrew: Yeah, but you haven’t rolled a 4 in three turns!  Dude, you need to diversify.  Your town is nothing but Convenience Stores.  You’ve got no industry, no infrastructure, no entertainment!  It’s just a barren wasteland featuring low, low prices!  Mommy, where are we going to live?  The Convenience Store, dear.  It’s all we have.

Rob: And that sounds convenient to me, alright?  Now give me that die.

Jess: Me too!  Pass over some of those lovely coins!

Rob: Your face needs to diversify.

Machi Koro, from IDW Games, is a recently-imported Japanese game designed by Masao Suganuma.  In it, 2-4 players will take on the role of city planners, looking to make their little town the first to successfully build each of four landmark buildings, and thereby win the game.  All along the way they will purchase new structures which will, in turn, earn them more income, all geared towards making each turn as profitable as possible.

Taking your turn in Machi Koro is simplicity itself.  Roll the die (or dice, once you build your Train Station) and check to see if any of your buildings have generated income for you.  Each structure is tied to a number (or two in some cases), and produce coins if that number was rolled.  Then you have the option of adding a single card to your town, and then play passes to the next player.

The artwork is lovely and the gameplay is sublimely simple – roll some dice, earn some coins, build a structure, and repeat until someone wins.  It is a game with a very low bar for entry, and can be enjoyed by nearly anyone.  Some may decry it for being heavily based on luck, but that’s not quite the case.  You see, Machi Koro is a game about building, true, but while it may first appear to be a game about building a town, what Machi Koro is really about is building an engine.

Diana: Ok, since I built my Train Station last turn, I can roll two dice, so…Nice, an 8.  My Furniture Factory generates three coins for each of my Forests, so hand Mayor Diana nine coins.  And I think I will invest in a Mine next, in case 9s start hitting the table.

Andrew: Not going to join Rob in his Convenience Store domination?

Diana: No, what are the chances I’m going to start rolling only 4s all of a sudden?

The special thing about Machi Koro, the thing that makes it interesting and fun, is that not only does every structure generates some income when you roll its corresponding number, but there are buildings which will get you coins whenever anyone rolls that number.  These structures always produce less than your ‘on-turn’ buildings, but they have a chance of triggering each time the dice get rolled.  Then there are structures, like Diana’s Furniture Factory above, which create synergies between your own cards, multiplying your income whenever they are hit.  There are also structures which trigger only on other players’ turns, causing the active player to have to pay out-of-pocket to anyone who has built that building.

In that way, you can build out a tableau of structures which hopefully generate income no matter what gets rolled. What could have been a game of randomized solitaire is instead an exciting interaction of dice and cards, where every player cares about every roll, rather than just their own.

Jess: Whiskers.  A 4.  I don’t have any Convenience Stores, so that does nothing for me.

Andrew: Easy there, big guy.  You don’t get anything unless you roll a 4.

Diana: Nuts, another 4?  What the hell were the chances of that?

There are some flaws, of course.  It’s not the deepest game, and there absolutely is a lot of random chance involved.  A string of really bad rolls can leave a player in the dust, and there isn’t much in the way of catch-up mechanisms in play.  Of course, the ultimate balancing factor is the randomness itself – everyone is subject to the whims of those dice, and besides, because so many structures can trigger when it isn’t even your turn, you can always build a great cushion for yourself against your own bad rolls.

Another downside is that, by the time your engine is truly up and running, you’ve probably already won the game.  Still, it’s hard to fault a game for not overstaying its welcome, and oh man, when one of your carefully-built combos hits, it feels incredible!

Also, and this is something that bothers the heck out of me and Rob but might not trouble anyone who is, you know, normal, is that the box is way too big.  The Japanese edition came in a box less than half the size and was still oversized.  However, there are already expansions poised to hit the market, so the abundance of space in the base box might not be so bad after all.

In the end, Machi Koro is one of our absolute favorite games.  It hits the table whenever we want to detox from heavier games or when there isn’t enough time or desire to play something truly dense.  However, it’s more than a filler – this game has the legs to go the distance, and at a very reasonable price point (under $25 on Amazon) and an expansion already in the works, it will make a fantastic gift for the gamer (or would-be gamer) in your life, not to mention an excellent addition to your own collection!

Andrew: Ok, that’s my second landmark built.  Rob, your empire of Convenience has, like, two turns to make a miraculous comeback before I-

Jess: That is a lot of coins.

Rob: Yeah it is.  I can pretty much afford anything I want now.  And I’d say that’s pretty…convenient, wouldn’t you?

Andrew: I hate you so much right now.

Check out Machi Koro on Amazon!