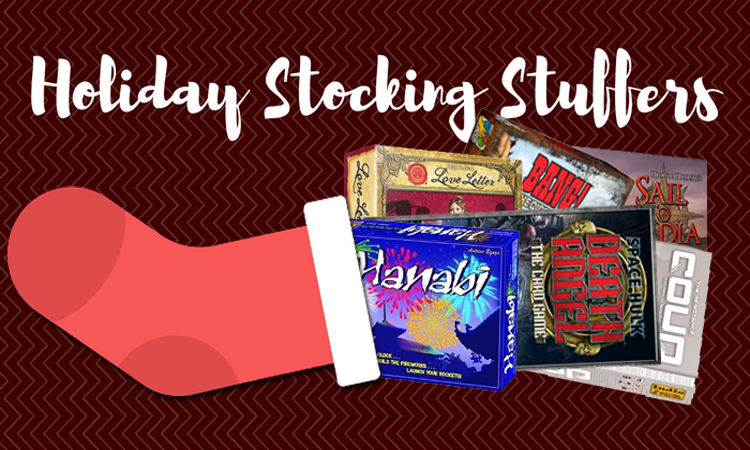 Andrew: What do star ships, tuna, the bishop of Tempest, hot potato, and public executions all have in common?  Why, they are all in these, our final five Stocking Stuffer suggestions for great holiday gifts!  As promised, I won’t be singing…anything side from the praises of these fantastic games, that is!

Andrew: Ok, I’m not proud of that one.

Here are our final five budget-friendly, stocking-accommodating gift suggestions for this holiday season!

Before we get into it, though, please note that these lists have been in no way exhaustive.  Rob and I share a somewhat particular passion for small-box games (possibly linked to living in smallish New York apartments), so the fact is we could have gone on for days.

Rob: We did go on for days.

Andrew: Fair point.  But I also wanted to mention that we had to do some last-minute substitutions on this list, to keep it restricted to games in-print and reasonably priced.  But fear not, fellow stocking stuffers, these are still top-draw picks for the giving!

Perfect For: Moderately-sized groups, People with a good sense of humor about public executions

From Wizards of the Coast comes a surprisingly friendly game about the Terror.  In Guillotine, 2-5 players will take on the role of executioners during the French Revolution, each competing to collect the most prestigious and valuable heads.  The game is played over 3 rounds, with each round consisting of a dozen nobles awaiting their turn at the guillotine.  Each noble is worth victory points, from the great King Louis all the way down to the lowly Piss Boy, but some, like the Martyr, are worth negative points.  Players also play cards to manipulate the line, shuffling nobles around in the hopes of getting the most points or avoiding the negative cards.  Despite its grim subject, Guillotine is successfully presented as cartoonishly funny, and its simple gameplay mechanics make it a really accessible, fun game.  The age suggestion is 12+, and that seems about right as a family game, but it’s also a perfect lunch-hour game, playable in under 20 minutes.

Players: 2-4
Features: Bluffing, Deduction, A really mischievous Countess
Estimated Price: Under $10 for the boxed version of the game, or under $8 for the pouch version (both are identical, save for their packaging)
Love Letter Boxed Edition

Perfect for: Cut-throat romantics, Small groups, Players who don’t cheat (the rulebook advises, quite admirably, that you not play with cheaters)

Yet another of the many small, affordable, high-quality games from Alterac Entertainment Group, Love Letter is a light game of bluffing and deduction where 2-4 players are all vying for the attention and affection of the crown princess of the city of Tempest. They accomplish this feat by trying to pass the princess letters expressing their adoration, while trying to confound the attempts of their rivals to do the same. Love Letter is mechanically quite straightforward and can be completed in around 15 minutes. It’s just a touch meatier than a standard ‘filler’ game without quite the complexity of larger, deeper games, so it hits a sweet-spot as a great cool-down game after long sessions of heavier stuff. It’s also incredibly portable and can be played basically anywhere, making it a natural fit for any gamer’s library.

Players: 2-8 (Better at or above 4)
Features: Variable Gameplay, Set Collection, Symbol-matching, Reflexes
Estimated Price: Under $10 on Amazon: Spot It

A fantastic little filler game and always a strong showing at our board game nights, Spot It! from Blue Orange is a matching game that can be played several different ways to accommodate players of all ages and skills. Each of the 55 cards is covered with 8 different icons and every pair of cards shares exactly 1 icon. Spot It! games are all about finding the matching symbol between cards, with variants like ‘hot potato’ (where you try to pass off your card to another player as quickly as possible), and ‘the well’, where players try to pull cards into their hand from the central deck by matching icons). Spot It! serves as both a filler game, a party game (I’ve seen adults shrieking with laughter as they play), and a very easy to learn kids game, making this incredibly affordable game the perfect fit for nearly any stocking!

When White Wizard Games unleashed the hugely popular Star Realms on an unsuspecting public earlier this year, it is possible (though unlikely) that they didn’t realize how immensely popular their sci-fi themed deck builder would be.  Luckily for us, all the hype proved to be true – Star Realms is a truly fantastic little game.  It is among the best 2-player games out there, and it can be expanded to include 4 or even 6 players simply by adding additional copies of the game.  And at around $14, it is an incredible value.  Players each purchase ships from those available, building up their fleets and acquiring outposts, and then wage war on each other.  The gameplay is tight, made even more engaging by a simple combo system which creates natural synergies between cards, and every match leaves you wanting to just deal out and start again.  Star Realms is neither plain nor shallow, but absolutely welcoming to both new and veteran players alike.  We cannot recommend this one enough!

Perfect For: Families, Relaxed gameplay, Cooling down after heavier games

This little card-drafting game was recently re-published by Gamewright, with gorgeous (adorable) new card art and a pretty tin container. Sushi Go! features easy-to-learn drafting mechanics as players try to outscore each other by eating the best sushi! Different food scores in different ways, such as tempura needing to be collected in pairs or wasabi multiplying the value of the next sashimi collected. And be sure to save room for dessert – after the last round, whomever has the most pudding will get a bonus, while the person who collected the least will pay a penalty! Fun, simple, and quick, Sushi Go! is a great game for families and friends like!

Andrew: Well, that’s that.  A whole mess of games which we think will make absolutely fantastic stocking stuffers, but more importantly, all of which are excellent games in their own right.

As I said before, this list is in no way exhaustive – in fact, we had to cut several games simply because they aren’t readily available but otherwise perfectly fit the bill (and stockings).  We’ll get back to those during our regular reviews, so stay tuned!

We hope you found something for those special gamers in your lives, and also that you perhaps saw something to add to your own wish list!