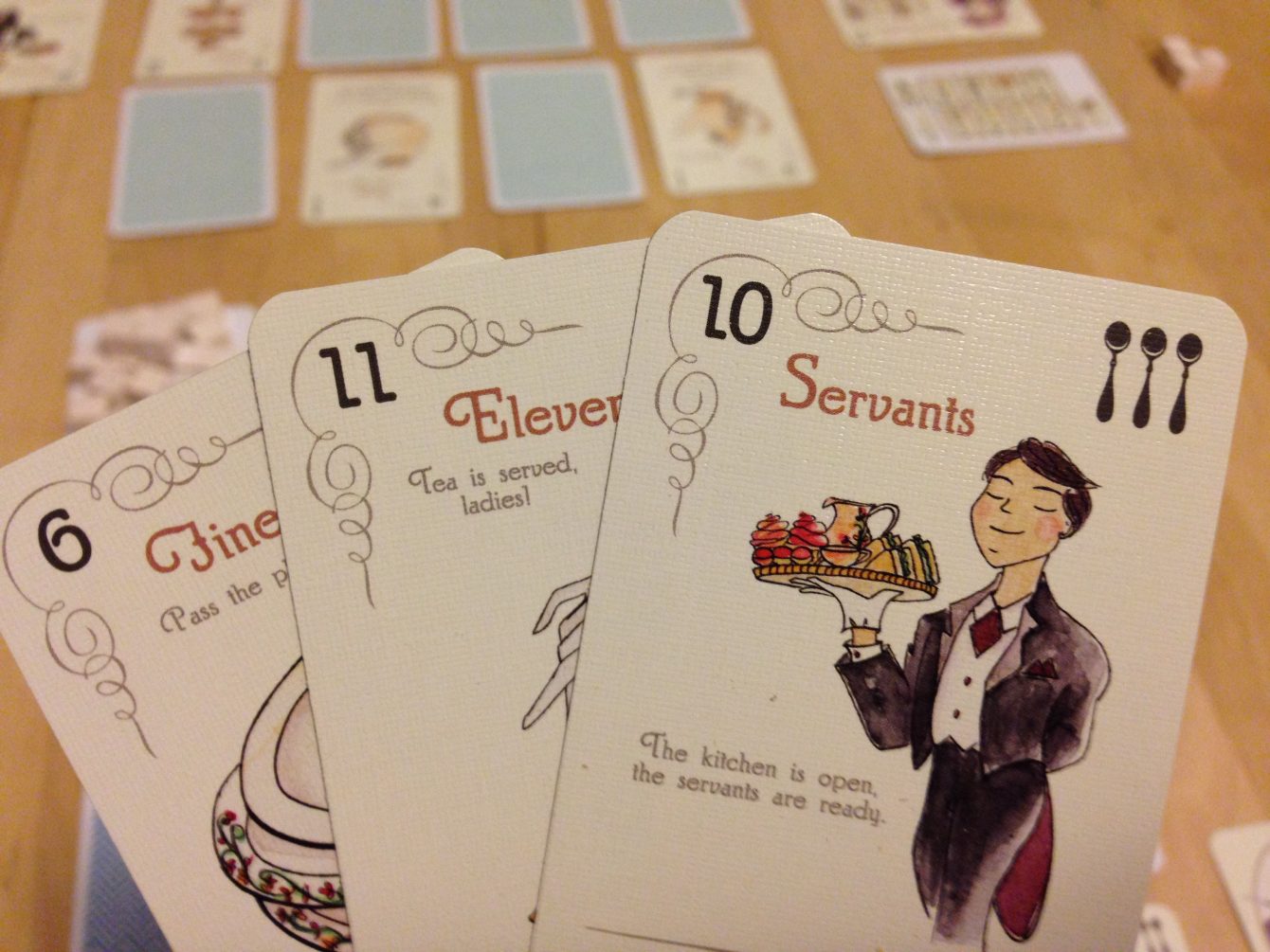 Rob: Today, Gameosity is going to show you a card game called Elevenses, from designer David Harding and published by Grail Games. It’s a game about cutthroat strategy. A game where you and your opponents will constantly ruin each others’ plans – not because you want to, but because you have to. It’s all secrets and backstabbing until someone finally decides they’ve had enough – until someone decides to call everyone in for tea.

Diana: Oh! Is it teatime already?

Rob: No! I was talking about… okay actually I could go for some tea.

The goal of Elevenses is for you to serve the best tea in town while also stabbing your friends in the back in the most polite ways possible. You’ll all have your own spread to manage, with all sorts of goodies like sugar, milk, sandwiches, and more – each of which is worth a specific number of spoons (points). The player with the most spoons when elevenses is called will take the round and earn a number of sugar cubes – represented by some adorable wooden cubes – and the first player to seven cubes is declared the winner.

Diana: I love the little sugar cubes. They’re so cute!

Rob: The cards look nice, too. It’s a very… distinguished looking style that fits the theme quite well.

To an extent, Elevenses is like trying to put a puzzle together before everyone else. Everybody has the same deck of eleven cards, and at the beginning of the round eight of them are dealt face down in front of them into their “spread.” In order to actually play a card, it has to be swapped for whatever face-down card is occupying the correct space (don’t panic – there’s a reference card). The catch is that once that card is played face-up, you must perform the action printed on it.

The low value cards (2-5) all do something beneficial to you. The high value cards (6-9) tend to be a bit detrimental by forcing you to let another player swap one of your cards with theirs, showing everybody your hand, etc. So you’ll get a fair number of points, but you also end up giving your opponents an advantage.

Sometimes this might be what you want to do, though. Maybe forcing everyone to pick a card to give to their neighbor will actually impede someone else? Or you could always put down tea (that freaking tea!) and force someone to turn one of their face-up cards over, thus negating it. This serving tea thing can get rather chaotic, actually.

Diana: You always made me get rid of my sandwiches.

Rob: Sorry, but they’re worth a lot of points. Besides, you ended up winning anyway.

Rob: One of these days I might actu-stop grinning at me!

Instead of playing a card face-up, you also have the option of swapping up to two cards from your hand with cards in your spread – keeping them all face-down, of course. This is where Elevenses can be surprisingly strategic. After a few games I found myself planning several steps ahead by placing specific cards in specific locations so that I’d have them in my hand after using another card’s skill. For example, placing Elevenses in the spot for Tea, then placing the Tea to turn over an opponent’s card and taking Elevenses into my hand for my next turn – and hopefully ending the round in the lead.

Then there are the Guests, which are bonus cards for use with the “Advanced Rules.” I put that in sarcastic quotes because there’s nothing “advanced” about Guests. They’re simply a way to earn a couple of extra spoons in a round by making sure a specific trio of items is face-up in your spread. Yeah, that’s all they do. Not that they aren’t welcome – they actually make games a bit more interesting – but there’s really no reason to keep them out of the basic rules.

Diana: I never could get Lady Dorothy to come to my tea party…

Rob: I think that’s because I kept ruining your cakes.

Rob: Okay please stop looking at me like that. It’s making my fight-or-flight senses all twitchy.

Rob: Right, well, anyway Elevenses can be delightful and sweet, but it can also be rather nasty.

Diana: Once we finished playing I wanted to go read a stuffy British murder mystery.

Rob: That’s a great way of summing it up, really. It practically begs you to get into character a bit – getting all snooty when calling elevenses, turning up your nose as you play cards, that sort of thing.

Diana: And there’s the British propriety coupled with the backstabbing.

Diana: The problem is that if you don’t play with a group of people who are willing to play up the British high society angle, you might not have as much fun with Elevenses. It’s a decent little filler game, but it’s a lot more entertaining when you embrace the absurdity.

Diana: …That was for the cakes, dear.

Diana: There.  Now that that’s settled, if you’re in the mood for some tea and treachery yourself, you can find a copy of Elevenses here: