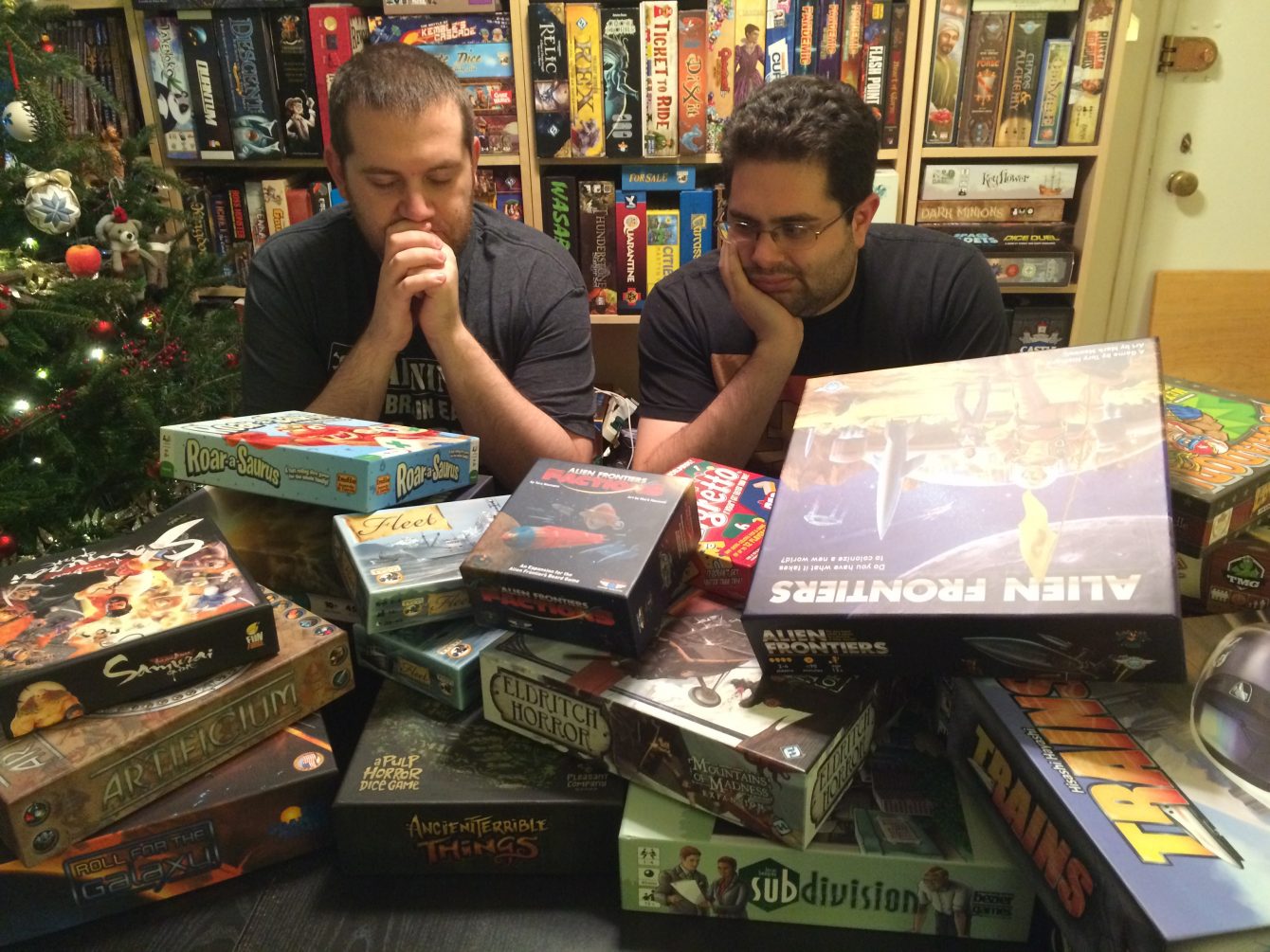 Diana: Hi everybody, and thanks for coming.  I bet you’re wondering why I called you all here today.

Andrew: I assumed it was to play some games.

Rob:  Wait, why wouldn’t we be playing games?

Diana: Well, ok, let’s start with that question.  If we wanted to, say, play Alien Frontiers, where would we play it?

Diana: Right!  And what’s the problem with that right now?

The holidays are well behind us now, and in the wake of all the gift-getting, gift-card-spending, and insidious clearance sales, it is very likely that, like us, your board game collection is bigger than it has ever been.  And now that you have all these new additions to your hoard, you may be faced with some storage issues – depending on how much your collection has expanded…or depending on the ascetic preferences of those you live with…

Diana: I was getting there!  I’m just really picky about what my-

Many board game lovers enjoy the “wall of bookshelves” look but, for me, it’s a bit overwhelming and can too easily look cluttered and monolithic.

Diana: Uh, that’s not the point. I am trying to give people other options if they don’t want the giant “look at all my kills lined up and on display” shelving unit.  Not that there is anything WRONG with that, but it’s just not everyone’s taste…I’m digging a hole here aren’t I?

Andrew:…Sorry, didn’t catch what you said.  I mean, just look at all these games, right?

Jess: Aaaand we’ve lost them.  You may as well just go on.

Anyway, here are a few ideas that you can feel free to use that will help make your collection part of your décor.

Option One – Hide It!

This does not mean that you have to shove your collection into the upper shelf of a closet; there are other fine options to be had.  IKEA makes a nice collection of cabinets with stylish doors in many different design styles.  I have also seen fantastic coffee tables that open up with storage inside.  The hide it method was the first game storage option that we selected in our apartment.  On a trip to Maine we found an old sea chest.

Rob: We named it Ryan.

Rob:  Get it? Ryan Seachest?

Diana: Anyway, we sanded it down, coated in in clear varnish, and put it by the couch as both game storage and a side table.  It worked really well for a bit; it had a small built-in compartment that was great for smaller games and everything fit nicely inside.  However Rob’s collection quickly outgrew the space the sea chest had and, though it was fun to watch him play Tetris with his collection every time he bought a new game, it was a little sad when he just couldn’t make them all fit.

Benefits: Your space will look nice and tidy, the built-in doors on a cabinet or chest will keep your games safe from pets and children.

This is the option that we have moved to post-holiday.

Rob: Diana got me bookshelves for Christmas!

Diana: Yes, I got him bookshelves and the implied permission to expand his collection even more. I opted for two bookshelves that were in a dark brown to match our existing furniture. Even though I shopped IKEA for these units I mixed it up a bit.  One tall and very thin unit for smaller games and one mid-height and wider unit for the larger games.  Putting two shelves of varying sizes next to each other will help to stave off that “game monolith” look that makes me shake my head and wonder how we can still afford food what with all the games.

Benefits: It looks pleasing, you have a lot of good space to work with.

Drawbacks: Let’s face it, you will run out of room. That brings us to…

Option Three – Look at all my games!

Step Two – buy as many tall, large bookshelves as you think will fit in your home.

Benefits: Fits so many games.

Drawbacks: Looks like you live with a pack of kids that have a very generous allowance.

Diana: Or it looks like you live with my husband or Jess’ husband.

Chances are you will most likely eventually end up with option three.  A few suggestions to make it look less like a scary wall o’ games:

Try to organize your collection in a by size or color.

If you have the room, take a cue from retailers and ‘face out’ a few of your favorite games so that the cover instead of the spine is front facing.  A lot of games have great box art and it looks cool to show it off a bit.

If you have even more room, mix in a bit of art or sculpture.  This will add some visual interest and help to break up the boxiness of well, a ton of boxes.

Mix it up a little; stack some on top of each other then shelve them side by side next to the stack, makes a fun pattern.  Yes, patterns, patterns are good, patterns aren’t messy at all, patterns are nice and clean and neat…

Andrew: Hey Rob, do you get the sense that Diana has gone round the bend a bit?

Rob: What tipped you off?  Was it her hugging herself while rocking? Or was it the chanting “My apartment is full of games” over and over.

Diana: You guys suck. Stop laughing!  I just want to have a home that looks like it could be featured on HGTV. Is that too much to ask?  Really. Stop laughing. I give up.

0 thoughts on “Decorating With Games”