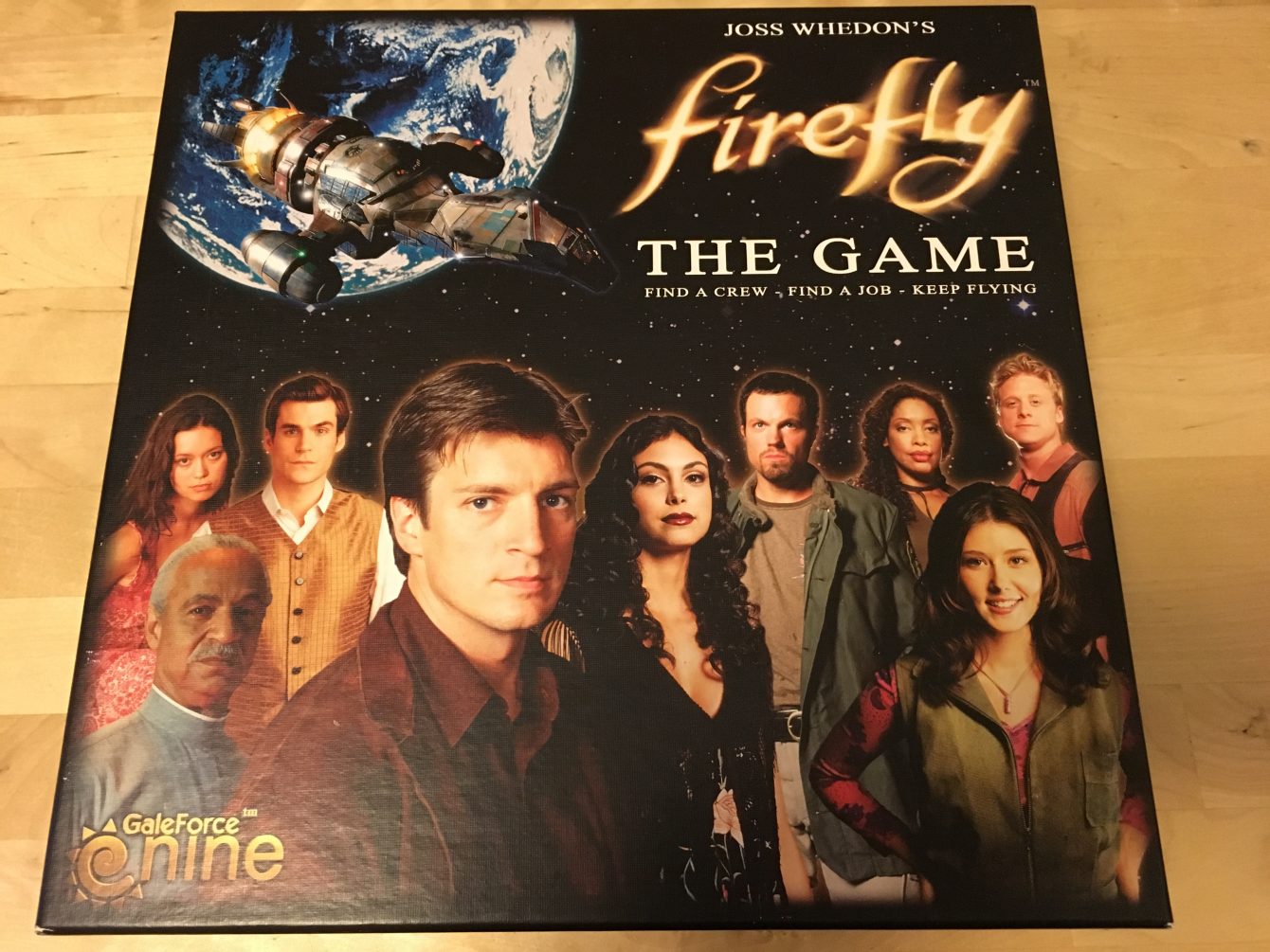 Rob: Today we’re taking Gameosity out into The Black with Firefly: The Game – a wild west-ish space adventure based on Joss Whedon’s TV series, from developer John Kovaleski and publisher Gale Force Nine.

Being a licensed game it’s, of course, stuffed to the brim with nods to the show. Fortunately you won’t have to know the difference between a Reaver and a Browncoat to be able to enjoy traipsing (or desperately fleeing) through the ‘Verse.

Firefly: The Game is somewhat reminiscent of PC space adventures like Freelancer and its ilk. There are overarching goals for players to accomplish in order to “win” the game, and there are several scenarios to choose from to keep things interesting and cater to different tastes, but you’ll most likely be spending the bulk of your time taking on side jobs and traveling all over the board with cargo or passengers (legal or otherwise).

The iconic Serenity and her crew are all present and accounted for, however there are also three other Firefly class ships for players to take control of along with several other captains and even more crew. Unless decided upon beforehand you won’t start out with a specific captain or crew, either, so you’re going to have a tough time recreating specific moments from the show.

Actually, everybody starts out pretty much barebones. You have a captain, a ship, and a drive core, and maybe a handful of odd jobs from a few of your contacts. That’s it. From there it’s up to you to decide how to proceed. Will you immediately try to start a job in a nearby location, despite having no crew? Do you want to spend some time shopping for ship upgrades at the Space Bazaar or on Persephone instead? Maybe you’d rather drift around Alliance space for a bit to earn a small but steady income doing menial tasks?

This can create a problem where you end up focusing more on bouncing from job to job instead of dealing with the main tasks, however. It’s incredibly easy to get wrapped up in earning credits, hiring more crew, upgrading your ship, avoiding Reavers, and so on. Personally I don’t mind it at all, but there’s a chance it might drive others a bit crazy.

The jobs you take from your contacts will probably be your biggest priority once things really get moving, since they tend to pay quite well (especially the morally dubious ones) and will get you an “in” with your employers – which means things like being able to sell extra cargo and contraband, and receiving other helpful bonuses when you’re interacting with them. Of course the more dangerous the job, the tougher it’s going to be to complete. The ones that are above-board tend to be reasonable and carry little risk, but when you have to split your profits with the rest of your crew (or risk them leaving in a huff) that 800 credit delivery job might not seem quite so appealing. Smuggling medical supplies, on the other hand… Oh, but wait, half the crew is “moral,” so pulling off immoral jobs like that will upset them anyway. I dunno, maybe we should do the smuggling job, then stop off at Osiris for a little shore leave to cheer them up?

Of course even the simplest tasks carry a little bit of risks since speedy movements might draw the attention of an Alliance cruiser or, worse, Reavers. Or maybe you’ll just have engine trouble and have to limp back to the nearest supply planet to refuel. But hey, at least nobody got eaten!

Even without the cavalcade of show references, Firefly: The Game is incredibly thematic. All of those examples I’ve been giving? It’s all happened to me or people I was playing with in the game. All of it. And more. Knowing who people like Patience are or being able to geek out about hiring Wash as your pilot is just gravy.

However, despite all the great little moments you can find (or which find you), there’s very little direct player interaction – at least in the base game. For the most part, everybody just does their own thing and tries to complete the main objective before anyone else. About the only thing you can do is trade supplies/goods with someone when you’re in the same space (if you both agree to it), or bribe unhappy crew members to leave their horrible captain and join up with you – which is admittedly fun to hold over someone but it rarely comes up. The Pirates & Bounty Hunters expansion addresses this by adding piracy, bounty hunting, and player-versus-player mechanics, but it doesn’t come standard.

It might seem weird but I’d actually liken Firefly: The Game to something like Eldritch Horror in that it’s expansive, highly thematic, and is easy to get wrapped-up (i.e. lost) in. Only it’s in space and far less horrible to its players. Although getting most of your crew devoured by Reavers one space away from completing a job (or getting them eaten at all, really) isn’t what I’d call “nice.” Anyway, it’s great and you should get it, regardless of how familiar (or unfamiliar) you are with Malcolm Reynolds and his lovable band of miscreants.

Firefly: The Game comes with a handful of scenarios to pick from, with three available specifically for solo play. The two biggest differences when playing solo are that you’re given the option to start with a pre-established crew, and you’ll be using tokens to act as a turn timer. Each of the three solo scenarios plays out much like their multiplayer counterparts, except for the fact that you have a set number of turns to accomplish your goals and won’t necessarily have to waste time building up a crew and upgrading your ship.

Since the base game has so little player interaction in the first place, solo play is not really that big of an adjustment. I do wish there were more scenarios available for solo play, but it wouldn’t take much to tweak one of the others meant for more than one person. My only real gripe is that the counters you’re supposed use to track turns are the same ones you use to track crew morale. And since you’re going to be hauling ass across the galaxy at full burn and taking big risks because you’re on the clock, there’s a good chance people are going to get sad. Then you realize you don’t have enough available tokens to track sadness, which further compounds said sadness (untrackably).  Isn’t that sad?

It’s an issue easily remedied by using some other form of tracker, but it’s a bit awkward to implement as-written. But aside from that, I think Firefly: The Game is definitely a good choice for solitaire play.

0 thoughts on “Firefly: The Game Review”