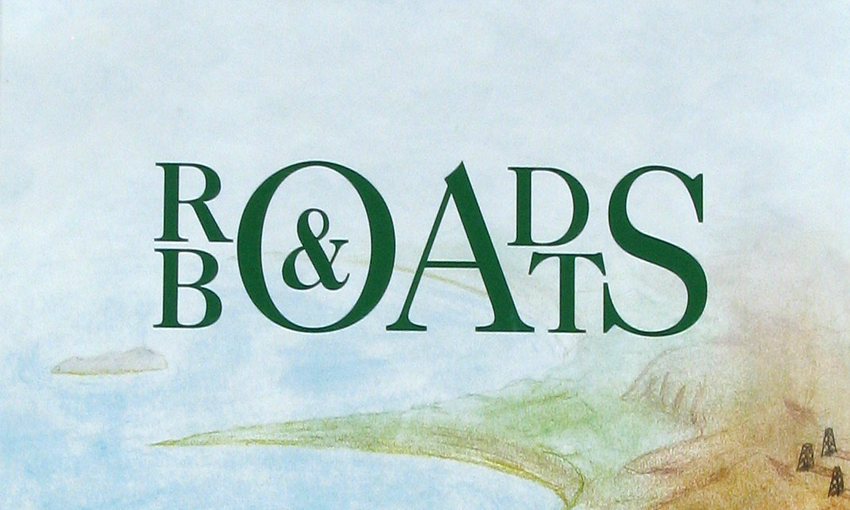 Rob: As far as I can tell, there are three common reactions people will have when you mention Roads & Boats, from designers Jeroen Doumen and Joris Wiersinga, and publisher Splotter Spellen. First is “Oh I love Roads & Boats!” Second is “What the heck is that?” Third is “Wait, that’s how much it costs??”

It might not seem like we’re off to a good start here, but if you fall into either of the last two schools of thought there’s a good chance this review might be of use. Or if not it’s at least an excuse for me to gush about Roads & Boats for a bit.

Andrew: Yeah… about that…

Rob: Oh shush, you’ll have your turn in a minute.

Roads & Boats is a rather big, rather costly, and very finicky game about building your own civilization and creating a transportation network to help you haul resources around in order to build more of your civilization. In other words it’s an engine building game.

Rob: Still not your turn yet.

Everybody begins a scenario (of which there are many, with maps made up of several hexagonal tiles for different terrain types) with the same resources. Typically, they can choose wherever they want to start but some scenarios, especially for beginners, give you specific spots to set as your home. Of course, if you end up really getting into it you can also create your own maps out of the terrain hex tiles.

Once the game begins, everyone performs their actions simultaneously during each phase. First, any resource-producing structures churn out resources and animals will breed if certain conditions are met. The idea is for everyone to restock what’s close to them so as to speed up the process. Second, everybody moves their transporters (donkeys, trucks, rafts, etc) as much as they can or as little as they want, and may choose to haul resources around with them. Next comes the Build phase where all the resources on a given tile may be used by a player’s transporters to create new buildings, roads, walls, and so on. Finally, everybody may spend resources that are sitting on their Home tile to buy bricks for the ever-present Wonder, which is basically points for the end of the game.

Andrew: What drove me crazy about this is how you pretty much have to start each game a certain way.  Without making optimal decisions from the get-go, you end up backing yourself into a corner and either have to waste several turns fixing things while everyone else blazes past you, or just mentally check out early.  It’s like “Oh, you used that stone to build a road?  Well, I hope you’re ready to spend eight turns trying to find some more.” If you don’t build a sawmill and a lumber mill right off the bat, you’re done.

Rob: That’s not entirely true. You don’t have to build them right away, but you do have to make sure you can build them within the first few turns. I’ll admit that if you spend your resources on something else first you’re going to have a hard time catching up.

Andrew: And that’s the problem. If it’s basically something I have to do then why not just start everybody out with a sawmill and lumber mill? Why make it seem like we have a choice?  All it does is make the game incredibly unfriendly to beginners.

Rob: I think that might have more to do with the various scenarios and how you won’t always start in a spot that’s close to a forest. Then you wouldn’t be able to build either of the mills right away anyway.

Once your basic engine is up and running you can start to branch out. Wood that you harvest can be turned into boards, which can then be used to create even more structures. Stone may be used to pave roads, which let your starting transporters (donkeys) travel a little farther each turn and are essential for carts and trucks. There are all sorts of approaches you can take from this point in the game.

Do you want to research rafts so that you can cross a large body of water and build a mine on a faraway mountain? Well then go do it. Would you rather stick to solid ground and set up a network of clay production and refinement in order to earn stone at a faster rate and pave your territory before anyone else even has carts? Go for it.

Andrew: Just be ready to deal with a lot of nonsensical and arbitrary rules along the way.

Andrew: I mean seriously, it took us like a half hour of playing before we managed to remember how animal breeding works!

Rob: It’s not that bad. You just need to have two of the same animal, probably donkeys or geese, all by themselves on a plains tile. So long as there are no buildings or other animals or transporters around they’ll make with the love and you end up with a new… thing.

Andrew: But it makes no sense! I mean, not only do they have to be alone, but they can’t even be near a building? Do zoning laws dim the libidos of geese in a way of which I was unaware? They don’t need that much privacy.

Rob: Thematically, no. But if they could reproduce easily then everyone would have an army of donkeys and geese in only a couple of turns. Then the intricate strategy thing would get tossed out the window.

Andrew: You know what you can do with your “intricate strategy.”

Rob: I know what I did with your “intricate strategy.”

Andrew: That doesn’t even-

Truthfully it does take a bit of time to get used to Roads & Boats. There are a lot of little things to remember, which are covered on the cheat sheets each player receives but will probably require more thorough explanation for newcomers. It also stands to reason that it’s not a game for everybody. Technically no game is for everybody, but Roads & Boats is especially particular.

Rob: Pardon me for liking a game that’s got a little more bite to it.

Andrew: That’s not bite; that’s a huge wall that says “Stay the frak out.”  There is a difference between ‘complex’ and ‘fussy’; this one feels decidedly fussy.

Rob: Pity I didn’t have the expansion to go with it, then.

Roads & Boats is a tricky game to pull the trigger on. The initial cost for entry is pretty worrisome (roughly $120~$150 depending on where you find it), although it also comes with a looooot of components like wooden transporter meeples for all the different vehicles in four different player colors, a ridiculous number of resource tokens, a big stack of hex tiles for map making, a rulebook, a scenario book, and so on. And as was mentioned it’s a pretty finicky game with lots of little rules and conditions to remember, although as someone who really enjoys micromanagement games I found this to be a big plus rather than a deterrent.

Really it all just depends on what you’re looking for and what you’re hoping to get out of it. If you really like meticulous games that move at a leisurely pace, and enjoy setting up resource engines, you’ll probably really like Roads & Boats. Whether or not anyone else you know will like it is another matter. Thankfully it’s got a pretty extensive set of solo scenarios that will keep you busy as you try to puzzle out the best strategy for a given map, but $100+ is an awful lot to spend on something you’re only going to be playing by yourself.

If Roads & Boats feels like your kinda thing, pick it up here!

Andrew: Yes. Yes you are.

One thought on “Roads & Boats Review”