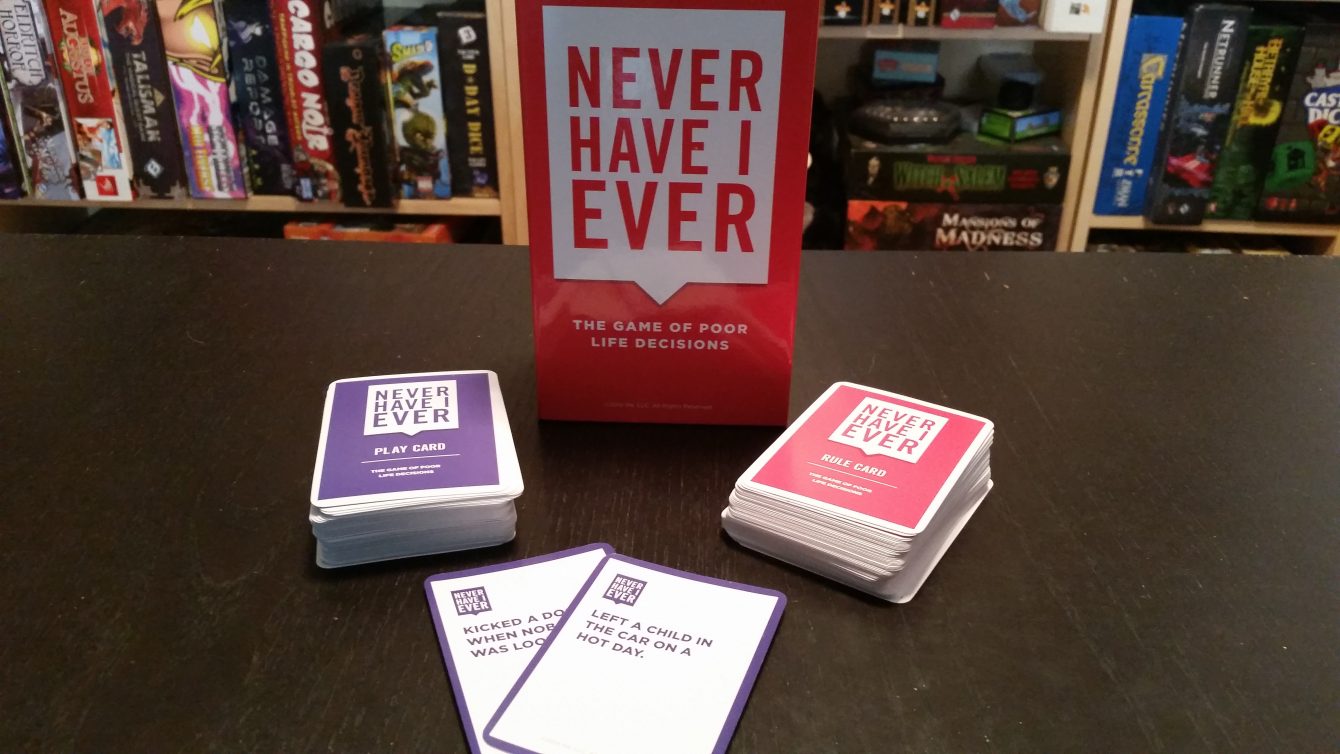 So this review isn’t going to read like most of Gameosity’s reviews.

See, when we do reviews, we make it a point to play the subject game a bunch of times, often with lots of different groups.  Our review style, that whole ‘conversational’ thing we do, exists because we all have our differing opinions on games, and maybe I’m in love with something, but Rob hates it, and Jess is kickass at it but doesn’t really enjoy it, but Diana thinks the art is neat, and so on.  We don’t like giving just one perspective on things, though when we agree, it makes reviews really easy.  And if a game is a flop for us, we try to play it around to try to figure out why we’re not connecting to it.

This time, the reasons were clear from the beginning.

The basics.  Never Have I Ever: The Game Of Poor Life Decisions is based on a classic drinking/party/college game that far predates the subject of this review (and for the rest of the review, I will use NHIE to refer to the party game, as opposed to the card game).  There are a million variants on it, but the structure goes like this – Someone starts a sentence with the phrase ‘Never have I ever…’ and then details some embarrassing scenario.  Then, anyone who DID do that thing either takes a drink or puts down a finger or whatever, and if you are the last person who didn’t get embarrassed out of the game/pass out on the floor, you win.  It’s an activity based on shameful admissions and group laughter, about picking embarrassing things of which you know your friends are guilty, and, mostly, it’s about getting/being drunk.

This is a card game adaptation by Ideas Never Implemented, for 4-12 players.  I’ll say up front that we went in with high hopes – this game is very highly rated, claiming a #1 Best Seller seal on Amazon.  But we found that this classic party game does not translate well into ‘card game’ form.

That’s the case for two reasons, I think.

The first is that there isn’t much ‘game’ to begin with.  The classic party game is really built around saying/admitting to embarrassing things and laughing/being laughed at about them.  By transforming the drinking game into a game with points and rules, it clutters the experience.  All you really need to play NHIE is a beer and a sordid past and a willingness to have people laugh at you.

The other reason it doesn’t translate well is that this game doesn’t really know what it wants to be.  Never Have I Ever: The Game Of Poor Life Decisions is trying to make frat-party-style shaming into a card game for the whole (over 18) family!  To that end, it’s tone is wildly inconsistent, whiplashing from incredibly harmless admissions to potentially relationship-ending confessions.

They say in the rules and in their advertising that the only rule in Never Have I Ever which matters is ‘No Judgment’.  And yet, without judgment, this game simply wouldn’t exist.

When I recently broke out a game at a party, there was a mixed reaction to the description – some of us thought it sounded fun, but some folks found the basic idea of the game off-putting.  Still, we had been sent this copy for review, so I wanted to give it a fair shake.  So, at the laughing insistence of some of my friends, the objections were stowed and I started explaining the rules to everyone.

Then, in randomly pulling cards out during my explanation, these two hit the table, one right after the other:

And the crowd got uncomfortable.

Because everyone there, regardless of age, orientation, or lifestyle, immediately recognized how messed up those are.  The first one is just one of the many examples of the vitriolic slut-shaming that this game frequently passes off for ‘humor’, aside from, perhaps, the juxtaposition of the politely neutral ‘partner’ with the wildly judgmental ‘skank’.  It’s unfunny at best and misogynistic at worst and, incidentally, it is also less effective than using a single condom, so, you know, it’s also really bad health advice.

But that second one?  That’s a prosecutable crime.  Like, you should be in jail for that.  It’s not a joke.  It’s not funny.  And even if no one in your group has roofied someone (and fuck them to hell if they have), what about someone in your group who has been the victim of a crime like that?  How are they going to feel when people start making jokes about date rape?

I’m not the most politically correct guy around, believe me, and I have had plenty of awkward moments where I said something insensitive without realizing it.  I claim no sainthood, and I’m still trying to absorb the concept of ‘trigger warnings’ and other acts of social sensitivity.

But this?  This isn’t a game.  It’s an invitation for awful feelings in a bright orange box.

Plenty of the cards in the game are harmless and many are going to evoke exactly the kind of hilarious ‘confessions’ (and cackles of laughter) around which the game should be built.

See?  Some of those are benign (Neflix marathons are basically the Olympics of our generation), and some of them are genuinely chuckle-worthy – I mean, who’s accidentally hugged a stranger?  You did?  When?  How?  I will laugh at you now!  The best follow-up question, of course, is how quickly did you let go?  And the one about imagining another player naked is exactly the kind of naughty, playful admission that make a game of NHIE really fun.

There is just nothing funny about some of this stuff.  And please don’t think I cherry-picked my examples; I couldn’t go fifteen cards without encountering something that, were it true, would make the person in question a genuinely horrible human being.

They say ‘No Judgment’, but some of these things are really, really judgment-worthy.  Like, ‘jury of your peers’ kinda judgment.

But the game is also maddeningly inconsistent!  Virtually every card which wasn’t an atrocious thing to admit to was so harmless as to completely lack humor potential.  According to the game, you should be ashamed of yourself for BEING ON A FIRST NAME BASIS WITH A DELIVERY PERSON.  I’m not kidding, that’s a card, and if you ‘admit’ to it, you get a point towards having made enough bad decisions to win. Just…what?

The framing of these statements, as ‘poor life decisions’, makes some things which are harmless and shouldn’t be a source of embarrassment into things the group should laugh at you for.  It makes no sense.  But remember, ‘No Judgment!’, right?  Ugh.

Listen.  I own every Cards Against Humanity expansion there is.  That is a game with cards referring to rape and murder and incest and worse.  And it is hilarious.  Because CAH lets us be bombastic and over-the-top and awful in a shock-humor driven way.  It’s vitriolic and violent and gross and (and this is the part which matters) it’s theoretical.  It’s abstract, extrapolated to the absolute absurd.  No matter what the cards say, I don’t have a windmill full of corpses, or whatever.  It’s not about us.

The laughs in Cards Against Humanity aren’t designed to come at anyone’s personal expense.  Never Have I Ever is about judging your friends and saying shitty things about yourself.  That’s what makes it feel so toxic.

There are cards which could easily be interpreted as homophobic or misogynistic and the game is absolutely awash in slut-shaming (may the powers help you if you’ve had more than a handful of sexual partners; you’ll be rolling in points in no time).  So even if you don’t think anything’s at all wrong with ‘getting hit on by a member of your own gender’ or having (and I quote) ‘Taken It Up The Ass’, those things are still treated as Poor Life Decisions.

Of course, I could weed through the deck (herp derp weed is hilarious), picking out the cards that bothered us, but seriously, it would be a big chunk of the 485 cards in the game (which is a lot of cards, admittedly), and I would be left with a pile of limp, shockingly unfunny cards, and that’s almost worse.

Someone in my group suggested that it’s actually a tool from the FBI for rooting out drug dealers and rapists, and to that end, maybe the folks at Ideas Never Implemented are doing good work for society.  But from where I am sitting, they are just cashing in on people’s willingness to be awful to each other with this socially tone-deaf game.

We contacted Ideas Never Implemented for a review copy (which they sent us without hesitation) based on that popularity.  We love party games and we love irreverent humor; we definitely don’t embarrass easily.  I knew the classic game it was based on and I was really looking forward to adding it to our party game rotation.  And this was still a total miss for us.

All that having been said, our attitude and review are probably in the minority.  There are clearly a lot of people who think Never Have I Ever: The Game Of Poor Life Decisions is harmless, hilarious, and enjoyable.

I just don’t know any.

3 thoughts on “Never Have I Ever Review”