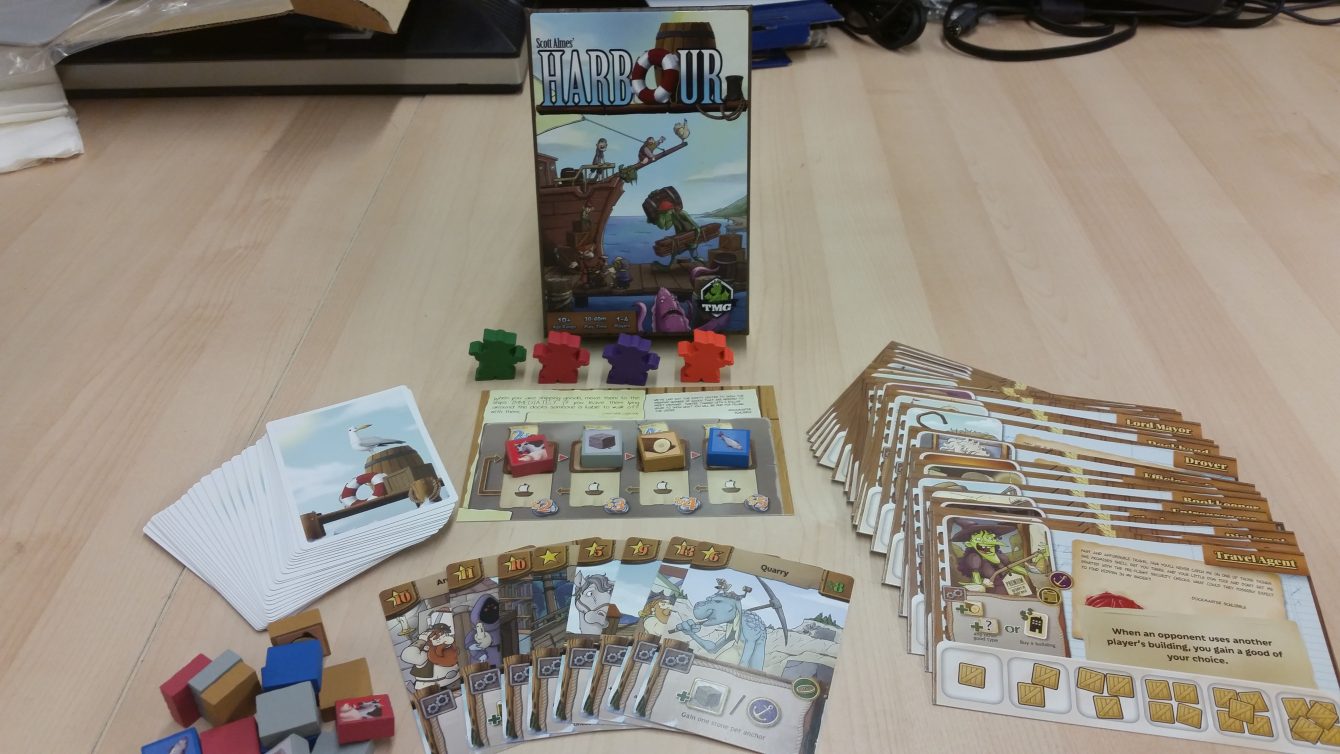 Andrew:  Today we are checking out Harbour, a game of commodity speculation and shifting trade markets, where-

Jess:  You’re making this sound like work.  Is this game work?

Andrew:  Not even a little!  Look at these worker meeples.

Jess: …Are those tiny goblins?

However, despite Harbour’s modest box size (something we love, incidentally), it is absolutely not a filler game – what we have here is a bonafide, fully-realized worker placement game with a few little twists which mange to pack a lot of fun inside of an hour and a lot of game inside a diminutive package.

Jess:  And they are a-dorable!

Each turn of Harbour is mechanically simple; there is only really one decision you ever have to make: where will I send my worker next?  That’s ‘worker’, in the singular; Harbour may be a worker placement game, but you only have one.  Placement rules are equally simple – you cannot stay where you are, and you can only occupy another building if it is currently empty.  That includes buildings you own, buildings your opponent controls, and neutral buildings waiting to be claimed.

Andrew:  You can place your worker in an unoccupied building your opponent controls, but you must pay them a toll of a single crate of goods.  It’s not so big a price that you’ll never use it, but it isn’t so insignificant that you’ll be able to ignore it, either.

Jess:  Unless, of course, you get a top hat.

Andrew:  That’s true, actually, though I have no idea why that works that way.

Jess:  A top hat makes you fancy!  Who wouldn’t welcome a dapper worker at your establishment?  It can only serve to increase morale.

Andrew:  It just seems…silly, is all.

Jess:  Oh come on, don’t act like you don’t appreciate the power of proper headwear…Don’t make me post a picture of you in the top hat…you know, that picture…

Andrew:  IT’S FINE EVERYTHING IS FINE NOTHING TO SEE HERE WE ARE MOVING ON

*Ahem*  Once placed, your worker carries out the action(s) associated with that building.  These actions may be gaining crates of resources (with or without losing another), shipping goods to purchase a building, or somehow manipulating prices.  Gaining goods is always a good thing – the more of something you stock, the more purchasing power you have.  However, all of Harbour‘s brilliant design revolves around one simple concept – the market.

At the center of the play area sits the Market tile giving all players the per-crate value of the four different kinds of commodities as well as the minimum number of crates needed to make sales.  However, these values shift and change as players sell their goods and flood the market, making every sale and purchase alter the game state.  What that means is that if Cattle and Lumber are the most valuable goods and someone sells their stock to take advantage of the price, those two become the least valuable commodities, with Stone and Fish moving up to fill the gap.  So while it’s always good to have lots of everything, that can be impossible to manage and it’s often far more important to plan around the market’s ever-shifting whims.

When you make a sale, you sell your entire stock of that good (unless you happen to have a ‘warehouse’ icon on one of the buildings you control), and receive the cost-per-crate for each crate you sold.  You can sell multiple goods at once, emptying your reserves to form a pile of capital.  That cash must be spent immediately to acquire one of the neutral buildings (you can over-pay, but no change is ever given).  There is no currency tracking in the game – goods are only sold as part of the same action to acquire buildings.

Jess:  This simplified economic system, paired with only a single worker assignment per turn, really streamlines the whole experience while not dumbing it down at all.  I like how each turn really boils down to just one choice, during which you have to consider not only for your current needs but also the likelihood that your opponents will take actions which will shift the market and mess with your plans.

Buildings are the source of victory points, and, of course, can generate crates of goods for the owner if other players are using them (unless those players have a coveted top hat, naturally).  Once a player controls their fifth building (including their starting building), each other player gets another turn and then Victory Points are tallied and the winner is declared Harbour Master!

Another thing about Harbour that we absolutely adore is the variability.  Thanks in part to a very successful Kickstarter campaign, Harbour comes with over 30 unique buildings and 14 unique player boards (the Kickstarter edition came with 6 additional player boards, which occasionally pop up for sale).  The replayability is huge, with so many combinations of player abilities and structures.

There is also a solo variant…

…which provides a dummy player to knock economic heads against in grand euro fashion.  Truly something for everyone!

Harbour is a fantastic game, not just ‘for its size’, but in its entirety.  Some of the mechanics for the buildings can feel a little finicky, and it can be surprisingly brain-burny as you try to anticipate two or three turns ahead, but that’s what makes this game so damn successful.

By distilling the worker-placement genre into its component parts and with the smart addition of the Market mechanic, Harbour manages to be both deep and accessible, and an excellent game all-around.

If becoming the new Harbour Master sounds like your idea of a good time, pick up your copy of Harbour here!