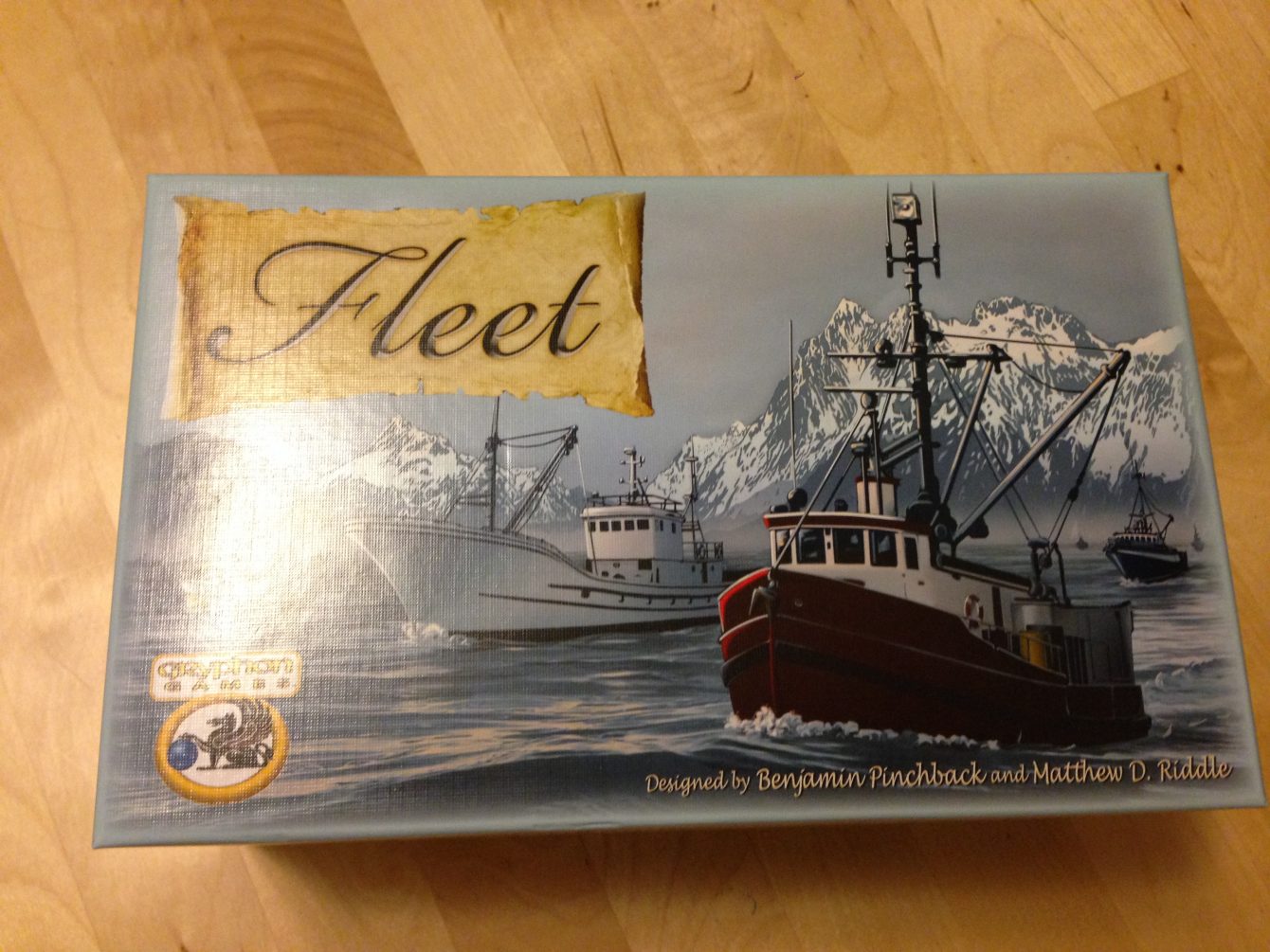 Andrew:  Ok everyone, I really want to review Fleet.

Jess:  Heck yeah!  We really hauled in a marlin with this game!

Diana:  Wouldn’t want this to be the review that got away!

Rob:  I’d never say this game was fishing for compliments – it’s no shrimp.

Andrew:  ALWAYS WITH THE PUNS!

Fleet is designed by Ben Pinchback and Matt Riddle (Eggs & Empires, Floating Market), is published by Eagle-Gryphon Games (Pirate Dice: Voyage on the Rolling Seas, Incan Gold), and plays 2-4 players (or more, depending on expansions).  Playtime sits around the 30-45 minute mark, though it feels really quick, especially once everyone knows the game well enough to keep the flow moving.

Andrew:  Ok, let’s not equivocate – we love Fleet.  We love it.  It just satisfies so many of the checkboxes on our ‘favorite game mechanics’ list that it is one of the only games which gets replayed several times whenever it hits the table.

Jess:  The four of us all like different kinds of games for different reasons, but we all seem to agree that Fleet is just kickass!

Diana:  Fleet is awesome!  Why wouldn’t you like a game filled with strategy and fish-shaped meeples?

Rob:  I love Fleet too, though to be fair, those fish meeples aren’t a standard part of the game.  And you always get irritated with me when we play!

Diana:  That’s just because you constantly grab the licenses I want before I can get them!

Andrew: Well, you know what they say – the early worm catches the fish.

Fleet is an engine-building game, with some light (but critical) hand management and auction mechanics.  Each player starts with an identical set of ship cards and the same per-turn abilities – launch a ship, hire a captain, go fishing, and draw cards.  This is the basic ‘engine’ in its starting state.  However, at the beginning of each round there is an auction, during which players will get to bid for different fishing licenses.  Each license allows you to launch that kind of ship, but also affects your engine in some way, either making it more effective or efficient.

For example:  If you acquire the Cod license…

You can now launch 2 ships per turn instead of one and you get to draw extra cards each time you launch.  Many of the licenses let you draw bonus cards, and nearly every license actually gets more potent depending on how many copies of it you have bought during the auctions.  Each Shrimp License you acquire, for instance, gives you a bigger discount on all future expenses.

Diana:  Yeah, they are a great way to take the sting out of the first few turns.  But even late in the game they are worth snagging, because each license is also worth victory points, so they are never valueless.

The way licenses stack is actually a really cool mechanic, because it means that you care about auctions right through the end of the game.  Sure, all it takes is a single Lobster license to let you launch lobster boats and hire two captains every turn, but the more of them you have, the more bonus cards you get for the number of captains you have.

Jess:  Card advantage is a huge part of Fleet – cards are ships, captains, victory points, and currency all wrapped up in one.  At the beginning of the game, you only ever gain one card per turn, and that’s way too slow to keep up with the demand.  But once you snag a few licenses and qualify for draw bonuses and cost discounts, your fleet will be bringing in fish and cards at an excellent rate!

The fishing part of Fleet is really simple – during your turn, each boat you have launched that also has a captain at the helm will take in a single crate of fish (represented either by standard blue cubes included in the base game or by these awesome fish meeples that you can order separately).  Crates of fish taken in by your ships are worth victory points at the end of the game (as are the ships themselves), but each ship has a limit of 4 crates that it can carry.  You’ll need to snag a Processing Vessel license if you want to turn those excess cubes into currency, but that’s just another component in the engine-building strategy.

Diana:  Of course, if someone outbids you on every Processing Vessel license that comes up, you’re in a bit of a bind…

Rob:  Seriously, don’t look at me like that.  It makes me nervous.

Diana:  Just something to remember when we’re up there bidding, dear.

Jess:  …Right, so while it is true that getting out-bid for important licenses can be frustrating, every license you get will give you some advantage (cards, discounts, extra actions, etc.), so you’ll likely stay competitive no matter what – you just may need to switch strategies mid-stream.

Andrew:  And that’s one of the things I like most about Fleet: once your engine starts humming, that’s where the game gets really fun.  It’s possible to focus on one strategy early on, then use your engine’s advantages to change directions more easily.

In Fleet, competition is mostly indirect.  The only time the players directly butt heads is during the auction, during which you are risking precious cards in order to get necessary licenses.  However, outside of the auction, players don’t really interact much, leaving each to try their best to build the most valuable, efficient fleet in the ocean.

Jess:  What I like most here is that everything is very positive – you are always gaining something, always building.  No one comes and knocks over your engine, and that’s a big deal for me.  As I’ve said, if you’re pile of points is higher than mine, then great, you win.  But don’t destroy my hard work just because you can’t hack it in the vicious world of deep-sea VP fishing!

Fleet has one major expansion out, called Arctic Bounty, as well as a mini-expansion.  These expansions adds a whole host of new ships and licenses, designed to replace and augment the base game.  By swapping cards in and out of the base, players can really vary their experience, making for some really interesting engine possibilities.

Andrew:  Especially that one card which lets you control the weather, possibly scuttling other ships.

Jess:  What, really?  Ah dang it!  Seriously, stop kicking over my stuff!

Rob:  It’s cute when you try to participate.  The problem we always have is that by the time your fleet is at peak performance, the game is over.

Jess:  Agreed.  Plus, the Arctic Bounty expansion adds a whole mess more ships and licenses, and along with them a ton of new game rules and modular content.  There is so much Fleet available that Eagle-Gryphon actually sells a Fleet big box, to contain all the goodness!  But by the time all our various engine elements are online, the dang license deck is empty and we’re counting up VPs.

Andrew:  So how do we handle all that?  Simple – we almost never play by the rules.

Fleet’s endgame condition is usually triggered by either the last of the licenses being auctioned or the last of the fish cubes being claimed (both of these have maximums set by the player count).  Instead, we follow the ‘fish to extinction’ model.  What’s that, you ask?  Simple.  We don’t end the game until every blue cube we own (sometimes even borrowed from other games) has been fished up onto our boats.

Andrew:  That’s right – the thing we dislike most about Fleet is that it ends.  And if that isn’t a rare endorsement, I don’t know what is.

So, our personal proclivities aside, Fleet is an excellent game.  It plays very well at 2 (Arctic Bounty includes an automated 3rd player you may add, if you’d care to), and it scales well beyond that – the automated player can even be used to support solitaire play.

Some may accuse it of being too abstract (the fishing theme was an afterthought to the design, for sure), but the fact is it holds together fantastically well, and even though there is nothing about the mechanics which say ‘fishing’, we think it still has a great look and feel.  And hell, it’s way more fun than actual fishing.  The limited player interaction of the auction provides just enough friction to guide your play style without making it an onerously contentious element.

Fleet and its expansion, Arctic Bounty garner our unabashed endorsement.  We think it is worth adding to just about any gamer’s library.  Go ahead and start by picking up Fleet right here, but believe us when we say that, before long, you’ll need Arctic Bounty, the Big Box, the Mini Expansion (even more modular components) and some Crab and Fish meeples as well!