Today we review The Networks, from the unassumingly awesome mind of Gil Hova (Bad Medicine, Battle Merchants), and in doing so, we have to ask some questions:

You know that cliché about nothing good ever being on TV?  Did you ever stop and wonder why?  Ever wish you were one of those network execs who could, you know, do something about it?

Well, Formal Ferret Games has something on Kickstarter that you will definitely want to see.

Andrew:  I mean, look at these shows!  ‘Litterbox Training Hour’?  ‘Grilling With Milk’?  ‘Let’s Pickle!’?!?  Seriously, what the hell happened to TV?

Jess:  Someone needs to do something about this…

(Kickstarter Prototype Notice:  Gil gave us this pre-production copy for review.  From the Kickstarter, you can already see that most of the bits are getting a nice upgrade, and that the art, missing here, is awesome.)

Up on Kickstarter right now, in The Networks, each player will take on the role of a competing broadcasting company, jockeying their lineup in order to raise the most viewers (everyone starts with none, because the tripe your network has been playing at the start of the game is, frankly, embarrassing).

Played out over the course of five seasons (rounds), each turn gives you the opportunity to make exactly one choice, be it hiring a star, securing an advertisement deal, developing a show, or securing a network action.  In turn order, players will take as many turns of actions as they can or want, and once the last player passes, the season is over, viewers are scored and the next season begins.

Andrew:  Ok, let’s just cut right to it:  The Networks is a great game.  Backing this Kickstarter is a no-brainer.  The game is really, really solid.

Jess:  Totally agreed!  Gil did an excellent job balancing the game; there is so much you will want, but you’ll only ever be able to do a small piece of it each turn.  You need to plan ahead and be ready to adapt when another player snags that star you desperately wanted.

At the beginning of each season, a number of Stars, Ads, and Shows are put on offer.  Your network has three timeslots to fill, and every Show does best in a certain timeslot (but can be assigned to any timeslot in a pinch).  Many shows have prerequisites for being developed, though, so if you want to replace ‘Lets Pickle!’ with ‘The Limping Treated and Released’ (an obvious upgrade), you will need to not only pay to develop the show, but you will need to assign a star to it (and can I suggest the star who “Always Dies In Everything?”). 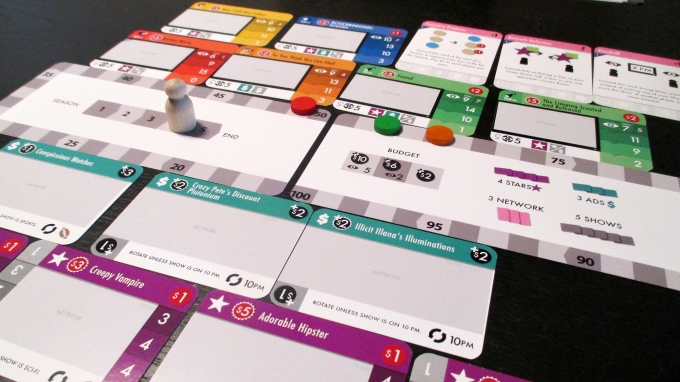 Stars bring their own fanbase, adding viewers to the Shows to which they are assigned.  Some shows will allow for optional Stars, or require/allow for Advertisers, giving you further opportunity for increased gains.

Jess:  ‘Pack them with ads’?  Aren’t you the guy who never watches anything unless he can skip the commercials?

Andrew:  Look, that’s viewer me, ok?  This is TV Exec me, and he’s got a budget to manage.

And budget management quickly becomes an issue.  The Networks is a medium-weight game; each turn, you are faced with an ever-diminishing pile of options from which to draw cards.  Money is tight, time is short, and available cards are limited.  You are only ever taking a single action at a time, but every action feels meaningful.

At the end of each season, you will balance your budget (cost of shows/actors vs. ad income), and then score viewers.

After that, brilliantly, each show will ‘age’, generally getting less-valuable as the seasons grind on.  Then the new season is set up and play continues.

Andrew:  The whole ‘aging of shows’ business is brilliant.  Some shows (and stars) will actually get better as they age, while many will get worse.  Balancing the two is a huge part of the game-long strategy.  Also important is knowing when to dump a show or star, replacing it with something new to keep your viewers engaged.  And besides, those shows you cancel will still earn some viewers in reruns!

The Networks is simply an extremely well-designed game.  It has some very thoughtful set-collection and card-drafting elements that work to enrich gameplay, and it is as aggressive or as passive as you want it to be; along with the deck of Network cards (each of which gives some awesome benefit), The Networks also includes cards labeled as ‘Interactive’ (read: screw your neighbor), which you are free to add or ignore as your group sees fit.  It is a truly smart touch, letting us play the game more passively when it is what we prefer, or with much more interaction if that is what the group calls for.

The Networks also features solitaire play, with a simple, clever mechanic for automating an opposing network.  These mechanics also spice up the 2-player experience; the game runs really well from 1 all the way up to 5 players.

Jess:  I don’t mind ‘multiplayer solitaire’, but I love that The Networks gives you the option to play however your group wants.  And The Networks has a good sense of humor, too.  The names of the actors, shows, and advertisements range from chuckle-worthy to laugh-out-loud funny.

Andrew:  For real, and the gameplay is just so solid.  Maybe it’s true that there’s nothing good on TV, but, quite frankly, with The Networks, I’ve already got plenty of entertainment at my fingertips.

We loved The Networks and wholeheartedly recommend you jump on Gil Hova’s Kickstarter asap!

(Totally honest disclosure time:  Gil is a friend of ours, so he provided us with a KS prototype for review.  We were SUPER glad that the game was awesome in its own right, because it would have been incredibly awkward if we had hated it – which is my way of saying our connection to him did not influence our review at all)

3 thoughts on “The Networks Kickstarter Preview”