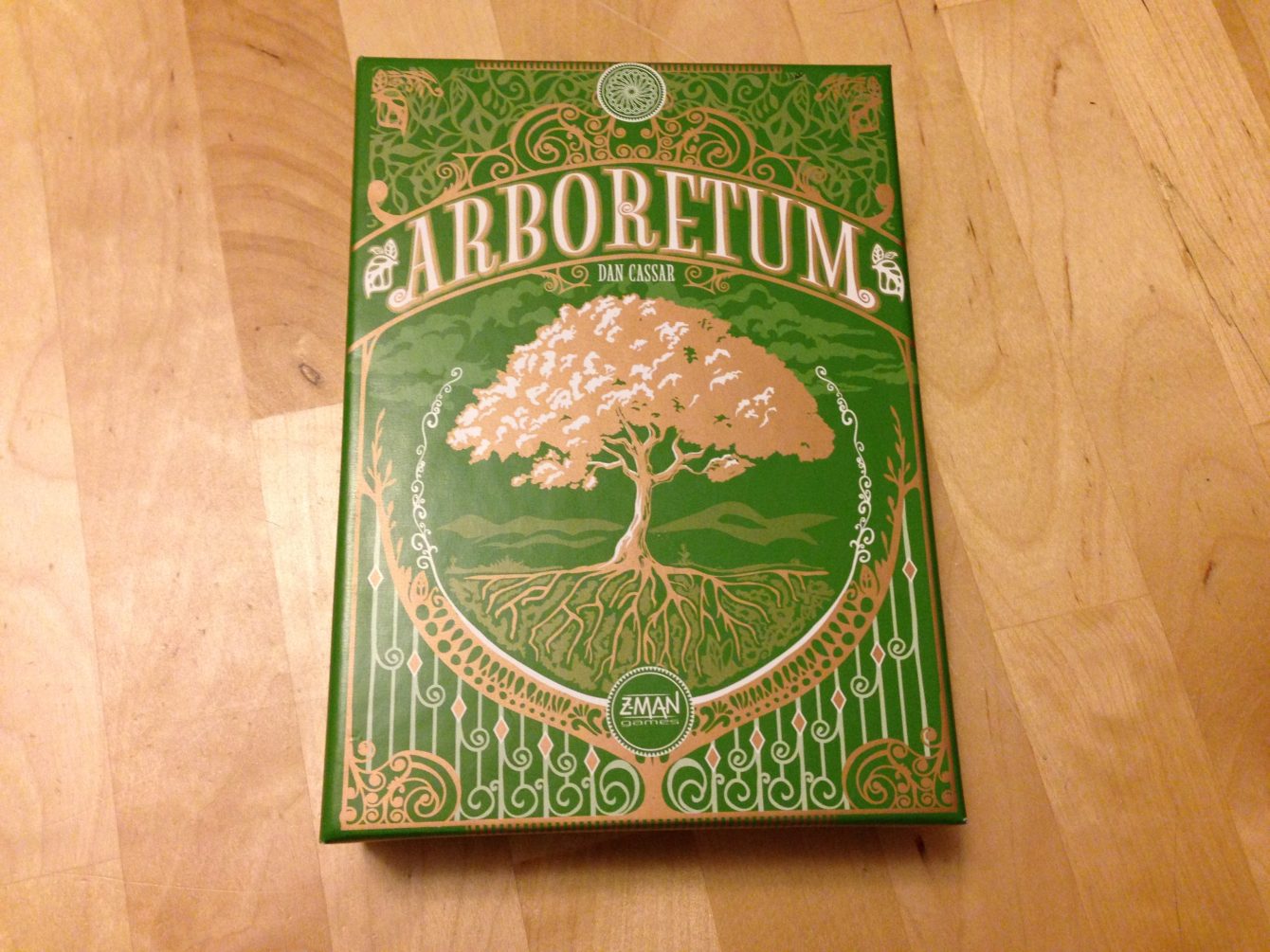 Now I’m totally a sucker for bizarre themes, but even I didn’t expect a competitive card game about trees like Arboretum – from designer Dan Cassar and published by Z-Man Games – to win me over like it has.

I should say upfront that, while I do really enjoy Arboretum, saying it has a theme is a bit misleading. Technically it’s about trees, yes, and there are trees on the cards, but that theme doesn’t really carry over into the mechanics. It could just as easily have been about space ships or zombies (all you really do is line up cards numerically), honestly. That doesn’t make it any less fun, but it is a shame that there isn’t a little more theme penetration.

That said, it’s still a very cool little game. The box comes with ten sets of cards, each representing a different kind of tree, and each set contains eight cards numbered one through eight. The number of sets you shuffle into the deck will change based on how many players you have (i.e. more cards for more players), but aside from that the general setup is exactly the same. Everyone gets a starting hand of seven cards and has to draw two, play one, discard one on their turn.

The rules for placing a card are very simple: it has to be adjacent to a card you’ve already played. The trick is in the end-of-game scoring. You see, you earn points for combinations of cards you’ve created. These combinations can include any number of cards from any of the sets in play, but they have to progress numerically and be bookended by two cards from the same set. For example, a 1 Lilac to a 3 Oak to a 4 Lilac to a 6 Magnolia to an 8 Lilac would score for Lilacs – because that’s the set that starts and finishes the combination. Combinations can overlap, too, creating an interweaving collection of all sorts of trees that have the potential to score massive points.

Drawing and discarding is also a bit different in that everyone has their own discard pile, and you can draw your two cards from the deck, the various discard piles, or any combination of those two options. Oh, and the game ends when the draw deck is empty. This means you have to be careful about what you get rid of, keep an eye on what other players toss, and be mindful the size of the draw pile. It creates quite a bit of strategy, actually, because you need to plan your own combos while also trying to fake out other players or even tempt them into drawing a low value card as a distraction of sorts.

Here’s where it gets a bit more complicated.

Rob: You hush, this is my review.

Scoring only takes place at the end of the game, and whether or not you can score points for a particular combo depends on the number of cards from that set you still have in your hand. That’s right – you have to intentionally keep cards in your hand if you want to actually score something. Some people will take issue with this –

– but I think it’s extremely interesting. It creates this tension throughout the game where you never quite know how it’s going to end. A massive, high-scoring combination could end up being for nothing simply because another player has a higher value collection of Willow trees than you do. Conversely, a small combo could end up winning you the game because nobody else had the right cards. It sounds a bit random but it’s really not – it’s all about planning and anticipating.

I suppose this somewhat… particular brand of card game might not appeal to everyone, but I really like it – and I’m usually more in favor of cooperative games. The cards are pretty and the theme is odd, but what really makes it for me is the unexpected complexity to everything. Deciding which cards to play, keep, and discard can make all the difference, and I love it for that.