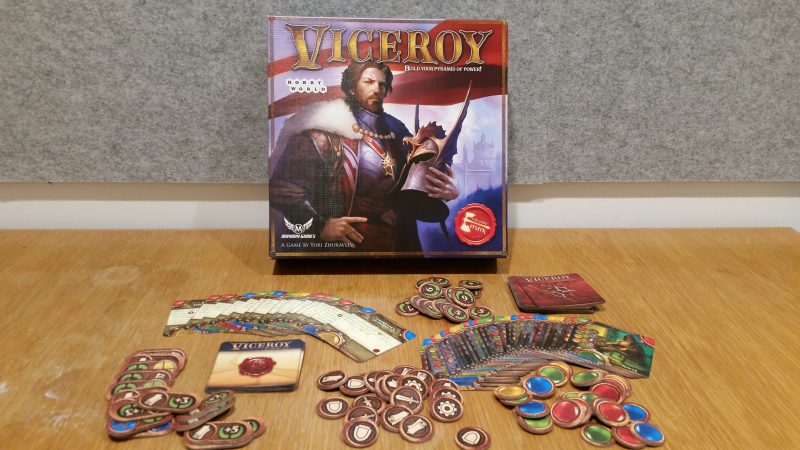 In Viceroy from Mayday Games (Get Bit!, Meteor, Dead Man’s Draw), players will vie for influence over various characters of the realms, enact sweeping legal reform, and build their own Pyramid of Power as they compete to gain the most Power Points to crush their opponents and become the victor!

Jess:  Pyramid of Power?  Sweeping reform?  Crushing opponents?  I like the sound of all that, but is this game really take-thatish?

Viceroy, designed by Yuri Zhuravlev, generally runs between 45-60 minutes or more depending on how grossly AP-prone you are (though simultaneous action selection mitigates this dramatically).  It supports between 1-4 players, including optional AI opponents to spice up 2 and 3-player games as well as to facilitate solo play.

In Viceroy, the players are trying to be named king (and also ‘winner’), ultimately determined by whomever gathers the most Power Points at the end of the game.  To do this, we must influence characters in the kingdom and manipulate the laws of the land so that our power is greatest.

Jess:  And how do we do that, exactly?

Andrew:  We give important people shiny objects so that they do us favors.

Jess:  Ah, politics as usual, then.

Each turn consists of two phases.  In the Auction, all players will participate in an auction to buy one of the Character cards on offer, using gems as currency.  In the Development phase, players will add the cards they have purchased to their tableau, reaping rewards and paying costs depending on how high up in their Pyramid of Power those Character cards are being added.  These cards grant a variety of benefits, some of which help players in future auctions or building phases, some of which grant victory points.

Each turn, four new Character cards will be added to the auction (any characters which weren’t purchased in the previous round will remain for one more turn, but are then discarded permanently).  There are four auction blocks, one in each color of jewel.  Players will secretly decide which block they are bidding on and then simultaneously reveal that block’s gem.

If all players want character cards from different blocks, then great, everyone gets what they want.  However, if two (or more) players reveal the same color gem, that’s where things get interesting.  There is a chance that any given block will have 2 cards available, as in Green and Red in the picture  above.  In that case, the players can try to divide up the block as they see fit.

Andrew:  The whole ‘simultaneous secret auction’ thing is really interesting.  The game encourages you to try some discussion before each reveal, either to try to figure out what other players are going to go after or to mislead them as to your own intentions.  But sometimes it pays to be totally honest; no one wins in a deadlock.

Jess:  Unless your only goal is to block another player from getting a specific card, which feels a little cheap.  And besides, after a few rounds it was hard enough to keep track of all the elements of your own pyramid, let alone what all the other players are building.  Generally speaking, I found it was just better to go for the card you wanted the most each round, and only fight about it if someone else wanted the exact same Character card.

Andrew:  Agreed.  Of course, that’s easier in a 2-player game than in a 4-player game.  In fact, I feel like Viceroy has a distinctly different feel at the 2-player mark; it’s way less stressful, because you are far less likely to be dueling over the same card repeatedly.  At 3 or 4 players, you will knock heads during auction far more frequently.  I feel both playstyles are fun in their own way, but your mileage may vary.

After the auction, each player will add up to three cards from their hand into their pyramid.  The cost to add cards increases based on the level to which they are being added.  Each card gives a different reward depending on level, so your pyramid’s shape will both determine and be determined by which benefits you really want on those cards.

After everyone has had a chance to build, the next auction round starts, and play continues until the Character deck is depleted, after which Power points are totaled and a victor is declared!

In Viceroy, set-collection is king.  As you build up your pyramid, you have the opportunity to gain various bonus tokens.  Some of the tokens have uses in-game, like Swords, which allow you to bypass the auction and take one card of your choice, or Gears which give you bonus gems when passing on Auctions.  There are also various ‘Scrolls’ which will give you end-game scoring opportunities and thereby help you form your pyramid-building strategies.

Andrew:  I think that’s my favorite part of Viceroy, actually.  I love how the characters you add can change your scoring strategy, making each game its own puzzle to be worked out differently.

Jess:  Yeah, but some things are no-brainers – early on, when everyone is scrambling for resources, nothing beats an Infinite Gem token or two, each of which discount the cost of adding Characters to your pyramid.

Viceroy is a bit of a point salad – practically everything gives you points under the right circumstances.  However, it isn’t particularly forgiving; in our experience, a player who finds and sticks to an early-game strategy will likely beat someone who doesn’t; the game manual even features ‘beginners tips’, one of which emphasizes the importance of establishing resources early, rather than just grabbing points randomly.

So, a few criticisms worth noting.

First of all, the game is gorgeous (not actually a criticism, but stick with me).  The art in Viceroy is some of the prettiest I have ever seen and it describes an amazing fantasy world that is just begging to be turned into a pen & paper roleplaying setting (and the premium upgrade available, which adds a mat for organizing your auction and plastic gems to replace the cardboard tokens, only increases the game’s aesthetic appeal).

However, that amazing theme is just pasted on.  Not to Viceroy’s detriment, but the game is an abstract set-collection game with an auction mechanism – all that amazing artwork is just window-dressing.

Jess:  Something that bothers me about Viceroy is that it feels like it’s over a turn or two too quickly.  It’s not an engine-building game exactly, but the first few auctions are usually spent grabbing Characters who get you resources and by the time you settle on a point strategy, the game is mostly over.  The end just feels a little rushed, to me.  My pyramid could have been so mighty!

Another important thing to be aware of is that Viceroy may look and seem like a very quick, casual game at first glance, but it is a very strategic game.  AP-prone players will be stuck endlessly calculating relative benefits of Character placements for optimal point gain, especially once you take into account the whole ‘gem completion’ aspect of the tableau-building.

It is very easy for players, especially new players, to feel like they too-frequently run out of resources.  Gems can be acquired by skipping out on auctions, but that income can feel like a trickle when another player has managed to acquire several Infinite Gems.  Even gaining new cards to build can be tough if the auctions aren’t going your way.

Andrew:  The difference between a player who manages to snag a few Infinite Gems and a player who doesn’t can be pretty devastating.  Once you get some more experience with the cards, though, you will know both what to look for and how to manage your resources, mitigating bad luck in early rounds somewhat.

Jess:  But luck does play a factor, especially with the Law cards.

Andrew:  Yeah, we should talk about those.

See, in addition to the character cards available on auction, players will get a few Law cards in their opening hand, and will have the option of drawing more when they place certain cards into their pyramids.  All of these Law cards can be added to your pyramid at no cost (which is awesome), and all of them give some benefit.

Some of these benefits are great, like giving you bonus gems or tokens.  Some…some are potentially game-breaking.

Ever since Viceroy was released, there has been some noise about ‘unbalanced’ Law cards.  People seem to disagree on which is the greatest offender, but one or two cards keep coming under community scrutiny.  These cards cause large end-game point swings at basically no cost to the person playing them and, in one case, directly at the expense of another player.

Jess:  It hasn’t happened to me yet, but I know that if I was in pretty good shape towards the end of the game and someone plunked down a Law card, at no cost, that I couldn’t stop, and then stole a critical piece of my VP engine, I would be pretty miffed.

Still, those criticisms aside, I have to say that I love Viceroy.  There is something intensely satisfying about the building of your pyramid and the completion of the various sets and VP conditions.  It is a game that rewards planning and experience, which isn’t always the case with games with some luck-of-the-draw mechanics in play; your fifth game of Viceroy will be different than your first.

Fortunately, with stunning aesthetics, strategic-but-accessible gameplay, and a good balance of player interaction, we think Viceroy is well worth the time it takes to learn.

If you are interested in building your own pyramid of power and growing your own influence, you can snag your copy of Viceroy right here!  And if you like the optional add-ons, like the auction mat and the deluxe gems, you can order them directly from Mayday.

(The fine humans at Mayday Games provided us with a review copy of Viceroy upon our enthusiastic request.  It didn’t influence our review, though; we’re not just a pile of character cards you can buy with some shiny gems.)