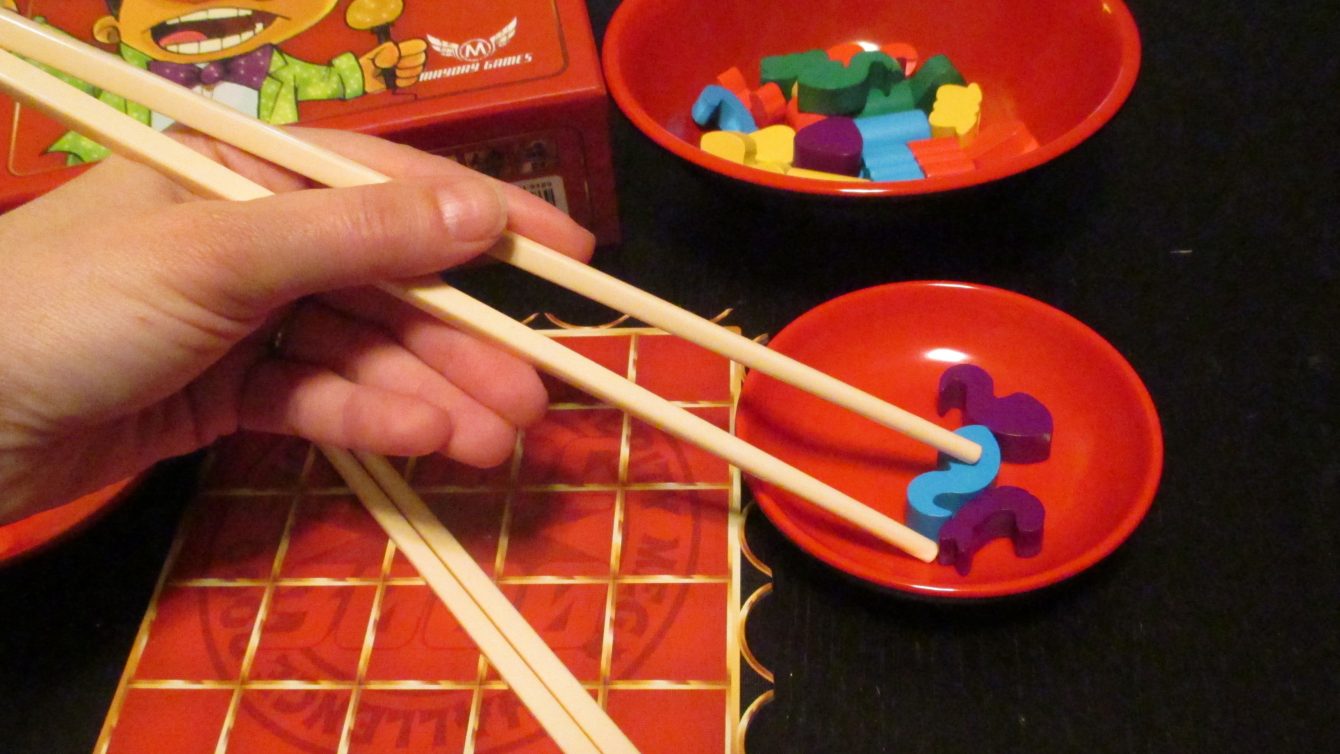 Today, Mayday Games (Viceroy) serves up Chopstick Dexterity MegaChallenge 3000 and with it a healthy dose of real-time chopstick-clicking fun!  Do you have what it takes to snatch all the best bits from the bowl before your opponents do?  Will we manage to get through this game without poking ourselves in the eye?  Read on to find out!

Jess:  A game about grabbing things with chopsticks?  Really?  So I guess all those nights of ordering Chinese takeout are about to pay off for you, eh?

Andrew:  You might say I have been training for this moment my whole life.

In Chopstick Dexterity MegaChallenge 3000 (yep, that’s getting abbreviated), up to 3 players will test their skills with the titular sticks of chopping, using them to snag pieces out of the central bowl in order to score points.  Each round, a new shape/color combination will be called for, and players will grab like mad to be the one who captures the most pieces with the selected attributes.  First player to amass a player-count-determined number of victories is the winner!

The components are simple but really very nice.  The bowls and chopsticks have a great, authentic look and feel (though they are not food-grade, so don’t go mixing them in with your dishware), and the wooden bits representing the different food are nice and chunky.

Actually, the quality of the components directly interacts with the nature of the game – lacquered chopsticks are tough to use on real food, let alone the smooth, unyielding wooden bits in play here.  Snagging a tentacle is easy enough, but those sushi rolls will give you some serious trouble, unless you’re a chopstick veteran, of course. 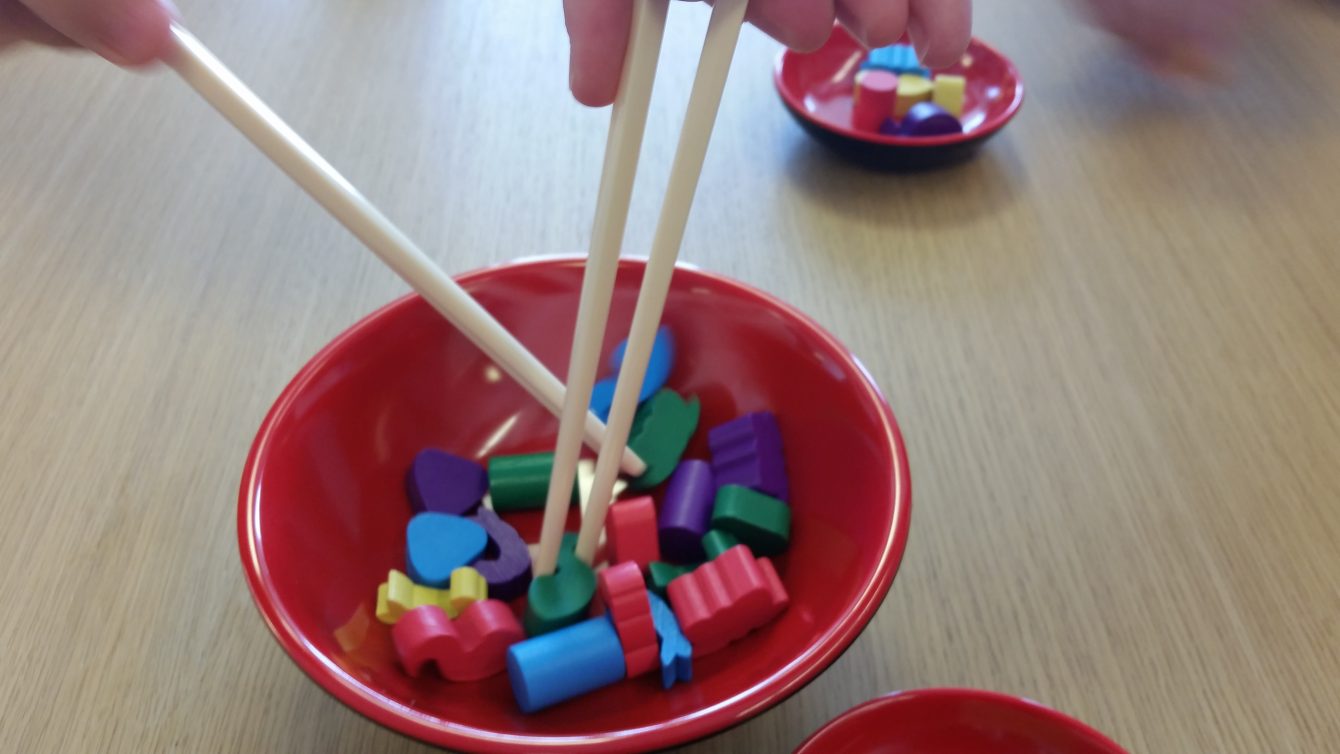 Andrew:  One of the things I think is really sort of interesting about this game is that it does something board games rarely do; it taps into a direct, physical skill that people who have never played a board game in their lives have reason to develop.  My dad may not be much of a gamer, but a lifetime of appreciating various Asian cuisines has readied him for this game more than any amount of architecture had prepared him for his first game of Praetor.

And conversely, if you want to get good at CDMC3K, you are going to be (perhaps inadvertently) practicing the use of chopsticks, which are a thing that you can use even when you aren’t playing this game.  In its way, CDMC3K is an incredibly niche, incredibly sneaky educational game.

Andrew:  Sounds to me like somebody needs to spend a little less time at the gym and a little more time with the dumplings…

Jess:  I want to argue, but your results are staggering! 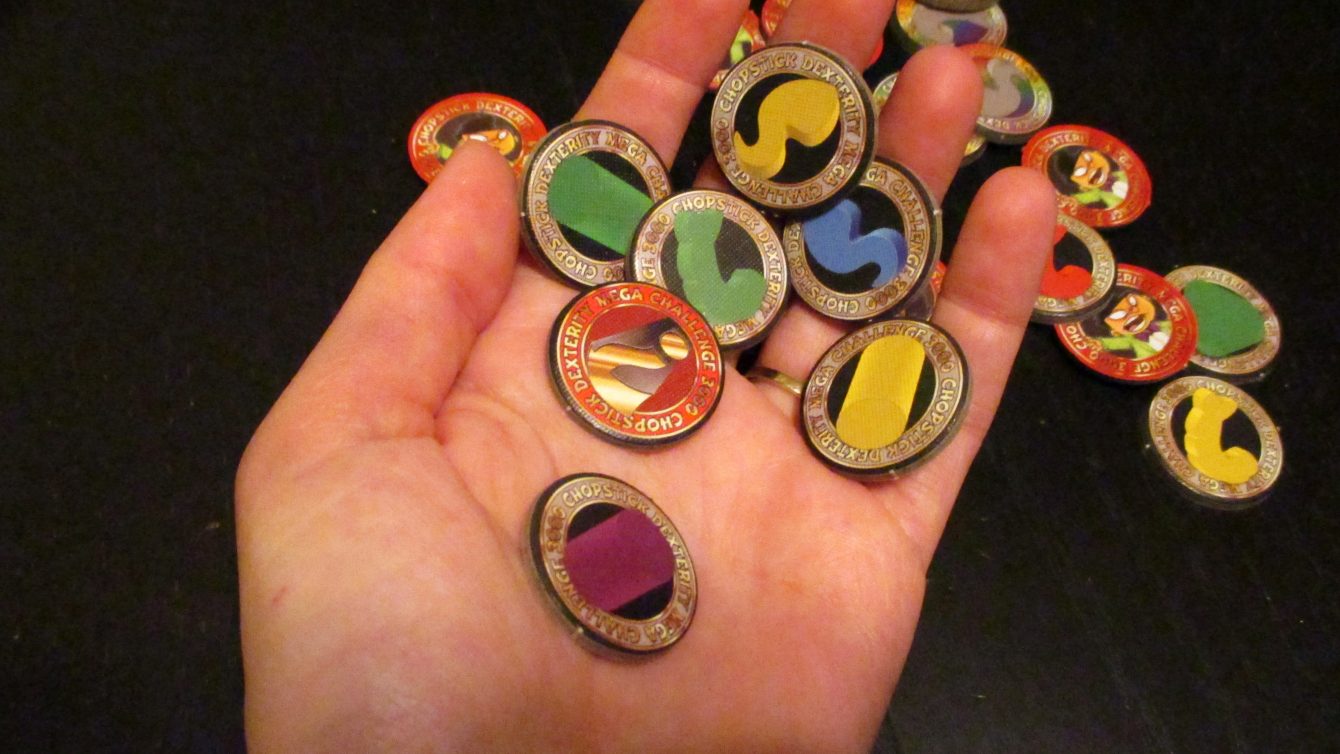 CDMC3K comes with rules to facilitate solo play, a sort of time-attack challenge that can be used to either game alone or to settle ties between competitive duelists.

And its that competition that absolutely makes CDMC3K.  See, around here, we often don’t love games that let you be a jerk to the other players.  Sure, it’s a valid tactic, absolutely pervasive in tons and tons of games, but we just don’t love take-that style gameplay very much.

However, the giggling, mad-dash fun of trying, desperately, to get that last sashimi into your bowl while one player is working their damnedest to knock it loose, while a third keeps sliding the main bowl further and further away from you (perfectly legal, by the way) will leave you in excited, frustrated, cursing, laughing fits.

For a little while, at least.

If there is a problem with CDMC3KOMFG, it’s that it is a single, manic note.  The frenetic fun is great at first, but the prospect of playing it for any substantial length of time, or with any frequency, is pretty minimal.  It is a fun little filler and will probably make appearances at the occasional board game night (or slightly tipsy after-dinner play session), but I just don’t see a group of adult gamers hauling it out much.

Which is actually not a terrible thing – I think that CDMC3KBBQROFLCOPTER would be an amazing game to share with kids.  Granted, they have to actually breach the skill-barrier of being able to use chopsticks to play, but it is a really fun way of building manual dexterity (not to mention improving chopstick use, which I consider a critical life-skill) and if a group of adults will giggle their way through a game, you’d better believe a few kids will have a ton of fun messing around with it.

Chopstick Dexterity MegaChallenge 3000 isn’t a gamer’s game, but that doesn’t mean that there isn’t fun to be had.  And with the right group of younger players, it will probably be an awesome addition to your collection.

Just don’t let them, you know, poke themselves in the eye, or whatever.

You can grab a copy of Chopstick Dexterity MegaChallenge 3000 right here (you don’t need to use chopsticks to click on the link, but if you did, it might earn you some bonus points)

(Our copy of Chopstick Dexterity MegaChallenge 3000 was provided to us for review by Mayday Games.  Their recognition of our chopstick skills didn’t influence our review one delicious bit.)