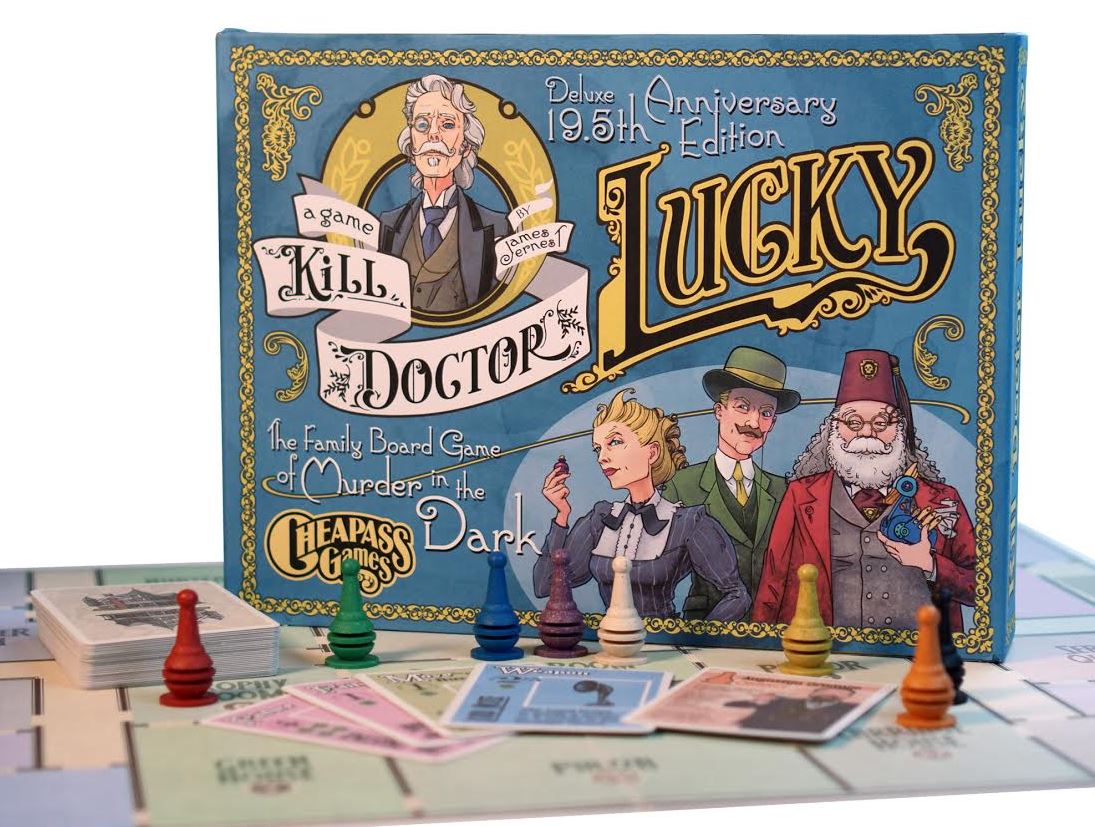 Today we review Kill Dr. lucky the 19.5th Anniversary Edition. Considering Dr. Lucky has been getting stabbed, poisoned, and otherwise rendered post-living, for almost 20 years, it might come as a surprise that none of the Gameosity team had ever played before. Read on to see if we nefariously murder the famed Doctor or if his luck holds out and he distracts our deadly intentions with his adorable cat.

Andrew:  Of course there is an adorable cat.

Jess:  It may be adorable, but it may not be cute enough to prevent ::ominous thundercrack:: MURDER!!!

(Pre-Kickstarter beta-test-prototype-hyphen alert!  Cheapass Games ironically spared no expense in sending us this proto, but shown components may well change during the Kickstarter!)

Kill Dr. Lucky sets 2-8 players on the surprisingly difficult (and somewhat obvious) task: kill the exceedingly annoying Dr. Lucky.  For this 19.5 Anniversary edition (*now live on Kickstarter!*), Cheapass Games has altered many rules, streamlining the game to make it less about drawing tons of cards and more about sneaking around the mansion, avoiding detection until you can commit ::ominous thundercrack:: MURDER!!!

Andrew:  Where did that lightening come from just now?

Everyone has assembled on a stormy night to do in the good doctor, but no one wants to get caught doing it. Players all start in the drawing room and will move around the board, trying to corner Dr. Lucky alone in a room with no witnesses. Line-of-sight factors in here, so if you are in a room whose doorway faces a room with another player in it, you cannot take any actions and must go about minding your own business.

Each turn you will get to move one space for free (and possibly more, if you have the cards to do so).  Movement around the board is surprisingly quick (since you can’t actually stop in corridors), and you’ll be zipping around constantly, trying to break eye-contact with the other players (the guilt is too much to take) and set yourself up for an encounter with the titular doctor.

Once you’ve moved, if you find yourself alone and unobserved with Dr. Lucky, you are absolutely encouraged to attempt to end his miserable stupid life.  Everyone starts off with a Murder rating of 1 (that basic desire to see Dr. Lucky dead), and when someone tries to off the doctor, they add that 1 to any single weapon they may use to determine just how effectively they are trying to kill the old coot.  Every weapon is best suited to a given room in the mansion, so using the Crepe Pan in the kitchen is more effective than using it anywhere else.

While it might sound easy to pull off the perfect murder, the Doctor is a slippery fellow.  The other players will get one chance to thwart your well planned killing by donating some luck to the victim. The action cards all have 0-4 lucky clovers on them and if everyone can fork over enough clovers to match your Murder rating, then Dr. Lucky will live up to his name for another day and the game goes on.

However, the bitterness of defeat is a strengthening diet; each time you fail, you will gain a cumulative +1 on all future murder attempts.  So the more frequently you try to put the bugger down, the more your pent-up frustration will empower you to kill effectively.

If, on the other hand, the other players cannot muster the Luck necessary to keep Dr. Lucky alive, then the murderer prevails and wins the game!

Andrew:  That got dark fast.

Jess:  It’s a game about ::ominous thunderclap:: MURDER!!!  What did you expect?

Andrew:  How do you keep doing that?!

We had a great time with Kill Dr. Lucky. The game plays fast and the card have a great sense of humor.  Some of the Failure cards in particular (used to thwart murder attempts) are hilarious in their tone and implications.  We laughed our way through the game, gritting our teeth every time Dr. Lucky slipped through our fingers because of a misplaced banana or errant child’s toy.  It’s a really good time.

There are also several minor variants included with these updated rules, including ghost players to complicate the 2-player experience (and the ghosts can win!) as well as Dr. Lucky’s cat, which will distract anyone who is in the room with her.  There is even a mode where Dr. Lucky has risen from the dead and chases the players around the mansion, trying to kill them!

There is one unfortunate rule leftover from the original game, that if Dr. Lucky moves into a room with a player in it, then it becomes that player’s turn.  That means you can chain your turns together if you keep your pawn one step ahead of Dr. Lucky.  This tactic is only of limited utility, because you can’t draw cards if anyone can see you, including the doctor, but it also means it is easy to skip players turns.  One of our players-

…lost multiple turns during the game and it took a lot of the fun out of it for him.  And it feels a little cheap, because when that happens, there is nothing you can do about it.  As we said, though, this tactic isn’t as useful as it used to be in previous iterations of the game and the emphasis is definitely more on hiding out until you can get the jump on the good Doctor once and for all!

We had fun with this newly-retooled edition of Kill Doctor Lucky, which will be going live on Kickstarter tomorrow, 10/13 (we’ll post links as soon as they are up).  Definitely swing over there and check it out!

Edit:  The Kickstarter is now live!