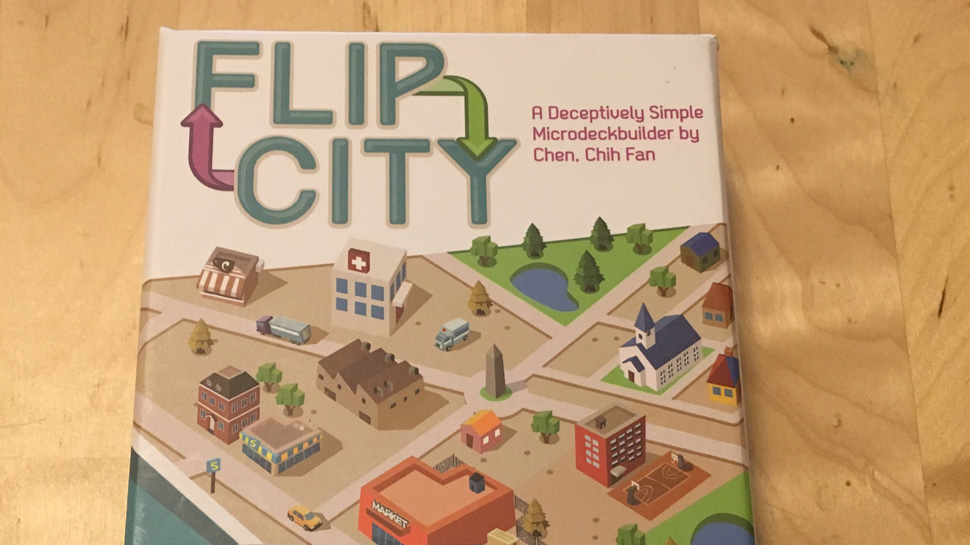 Flip City – from designer Chen Zhifan and publisher Tasty Minstrel Games (Cthulhu Realms, Harbour) – is a weird little card game that I’m not quite sure how to categorize. You have to build a city, kind of, but you also wipe the slate clean after every turn. You’re sort of building a deck of cards but you have no direct control over what order cards are played in. There’s also a heavy emphasis on push-your-luck stuff, but with cards instead of dice. It’s… strange. Strange, but I kind of like it.

Everyone begins a game of Flip City with their own starter deck – all made up of the same cards. From there they have to try and play what they’ve got in order to buy more cards, as well as to upgrade the ones they already have. The catch is that each card must be placed one at a time, without being able to see anything under the top card on the deck. The other catch is that some cards have little frowny faces on them, and if you place more than two of them in a turn you’ll bust and lose everything you’ve played.

So the trick is to try and anticipate what cards might be underneath the one you’re about to play (some of them require you to activate them when they’re on top) as well as know when to stop drawing and start spending. This can include either buying one card from the general offer or paying to flip over a card in your discard pile in order to upgrade that building to a (usually) more useful one.

Diana: The flipping can be a bit of a pain, though.

Rob: Yeah, that’s true. The double-sided cards make shuffling difficult at times because you need to make sure not to accidentally flip something over, but you won’t have any real way to know for sure if you did since there’s really no “face-up” or “face-down.”

Diana: It’s also tough to always have to remember what you have in your discard pile, or remember what’s on the other side of each card.

Each card (each face of each card, really) also has some kind of special effect you’ll need to consider when playing them – such as the Factory forcing players to discard a card from the bottom of their deck (if able) or the Hospital giving a money bonus for each unhappy face in play. It’s not terrible to try and remember all these functions, especially with them written on each card, but when you need to remind yourself what’s on the opposite side of a Central Park with the potential to forget which side the card was originally on, it can gum things up a bit.

There are one of two ways to win a game of Flip City: either by successfully playing 18 cards along with at least one Convenience Store (and not busting, obviously), or by playing cards with eight or more cumulative points (these look like award ribbons). How you get either of those results is up to you.

Rob: I do think there can be a fair bit of strategy to Flip City, what with all the different special powers for the cards, but it feels a bit muddled at times.

Diana: Definitely. I felt like I’d only just started getting my engine up and running when you won. And you didn’t even realize you’d won!

Rob: I know, that was weird. But it’s true! I was just playing cards for buying power and hadn’t realized that I’d hit the eight point target at first. It just sort of happened, and then the game was over.

None of this means that Flip City is a bad game, though. In fact, it’s pretty fun as a quick little ice-breaker. Some of it can be a tad awkward at times, like keeping track of what’s in your discard pile, remembering what potential bonus abilities you can call upon, and keeping track of what face a given card is supposed to be on, but so long as you’re mindful of card orientation it doesn’t take much effort to simply look through your discards.

Diana: I think it’d be perfect to bring along while traveling or to play with people who aren’t all that familiar with board games.

Playing Flip City solo is more or less the same simple, fun, and slightly fidgety mini-deck builder that it is with multiple people. The only real difference is that you’re on a sort of timer, where you have a more limited number of cards available to buy and the game ends when the offer is empty. That, and you have to remove a card from the game every time you reshuffle your deck.

While I absolutely appreciate not having to manage a simple dummy player or bring in any special cards in order to play solo, it does force you to embrace slightly different strategies. Not that it isn’t fun, of course. It’s just that the techniques you pick up in solitaire – like being much more mindful of reshuffles and taking bigger risks because time is running out – may not all carry over well when playing with people.