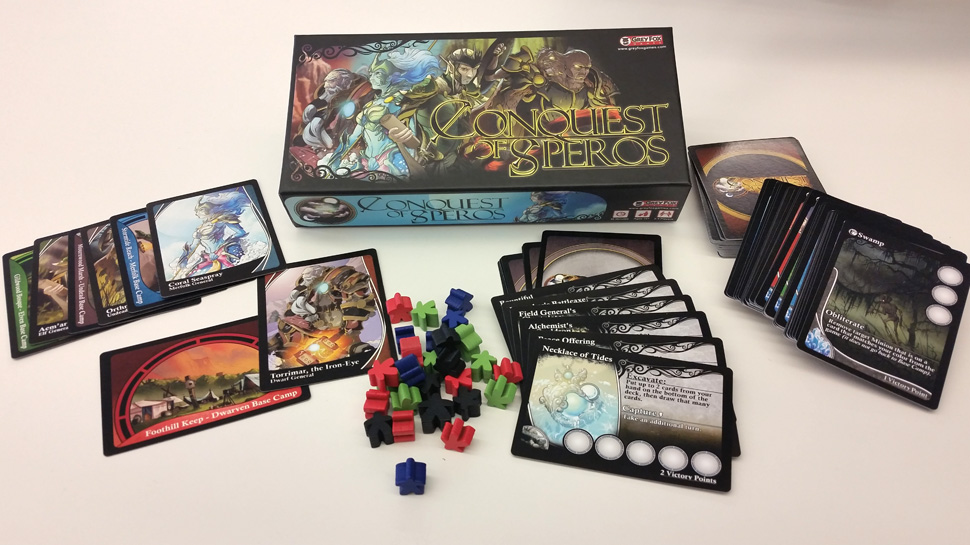 Today we review Conquest of Speros, a small-box area control game from Grey Fox Games.  Does this little package indeed contain good things (as is tradition), or is it just another collection of tiny meeples with nothing better to do than loiter around on objective cards?  Let’s find out!

Conquest of Speros is a card-driven area control game for 2-4 players.  Each player takes on the role of a General, set on the task of expanding the influence of her faction by gaining control of territories and undermining the deployments of her opponents.  It is produced by Grey Fox Games and plays out in about 30 minutes, promising a gameplay experience commiserate with its portable box size.

Andrew:  One of the first things that struck me about Conquest of Speros is the artwork.  Each of the Generals is unique, featuring anime-esque illustrations and thematic (and powerful) 1-time-use abilities.  The art on the Location cards is reminiscent of the land cards from Magic the Gathering in the best way.

Gameplay itself is pretty straightforward.  Each player has a hand of Location cards to start with.  At the beginning of their turn, players will discard a card and may activate the ability on that card if they desire.  These abilities mostly revolve around manipulating the minions, both their own and the other players’, in the quest for area-control (which is the heart of the game, more on that in a sec).  Then, in the Action step, the player will pick one of the four available actions:  Explore, Attack, Lead, and Plan.

Explore adds a Location card from the active player’s hand to the Skirmish area, i.e. the middle of the board where the action happens.  Attack (which is waaaay less aggressive than it sounds) deploys one of your minions to one of the locations in the skirmish area in an attempt to gain majority control.  Lead sends your General (along with an extra minion) into the skirmish, and Plan lets you draw some cards.

Jess:  The whole aspect is easy to wrap your brain around.  As long as I have more of my adorably tiny minions on a card than you do, that card is mine!  Locations are worth victory points outright, but they can also provide resources (Crystal, Gold, and Iron) which provide bonus points at the end of the game.

What is really interesting, though, is the way the abilities of cards can manipulate minion placement.  For example, if you capture a card, all the minions on that card (no matter who they belong to) stay on that card, meaning they can’t be used to capture new locations.

However, there are plenty of cards that can, as they are discarded, pull minions off captured locations, returning them to your base camp so that they can be deployed again!  Additionally, there are cards that drive minions off unclaimed Locations, or swap positions of minions, or otherwise change the landscape of the skirmish area to foul up your opponents and give you the advantage.

Andrew:  And that’s where Conquest of Speros gets really fun.  It’s more than just a scramble to dump troops onto available Locations; you have to have an exit strategy for the minions you deploy, because not only are they a finite resource, but once one player runs out, the game ends immediately.  So you will have to carefully juggle your numbers, deploying and reclaiming your troops so that you never get locked out of a valuable position or desirable resource.  It adds a really great layer of strategy to what would otherwise be a pretty simple game.

Jess:  And even though you will be able to pull minions off captured locations, those locations are never un-captured, so you won’t have the frustration of scoring a nice big pile of points, only to have your opponent depopulate your card and negate your hard work.  Which is good, because I hate it when people kick over my stuff!

Conquest of Speros is a really solid little game.  However, we found that, while gameplay was fun at every player count, it was at its best with 3-4.

Jess:  That surprised me, but the fact is that, in a 2 player game, it was just a little too easy to give up on Locations that could have been fought over in a 3-4 player game.  There was less contention (which we usually prefer) but also less interesting stuff happening.  Once an extra player or two got added, though, the game really started to shine.

In addition to victory points from area control and resources, each player will have secret goals they will be working toward, such as extra VP for every captured forest or extra VP for Ancient Artifacts you have partially excavated.

The drawback to Artifacts is that, unlike captured Locations, the minions on a captured Artifact cannot be moved or reassigned; however, the benefit of controlling an Artifact is generally pretty awesome, and the Excavate abilities are generally quite enticing.  And besides, Ancient Artifacts are worth a lot of points themselves.

Andrew:  The Ancient Artifacts are really cool, introducing even more interesting choices: Do I deploy a minion to an Artifact to activate its Excavate ability, even though I’m losing that minion for the rest of the game? Or do I hang back and let my opponents have an easier time capturing it, at the cost of their own units?  I feel like Ancient Artifacts add so much, actually, that they make the Locations seem a little lame by comparison.  Capturing Locations is an intuitive mechanic and all the minion manipulation leads to some really fun plays, but I just wish the game made a little more use out of the Ancient Artifacts.

Jess:  Well then, have I got an expansion for you!

Lost Treasures is the first expansion for Conquest of Speros, adding a few new Locations, Generals, and a pair of Ancient Artifacts.  Though the expansion is fairly small, it focuses almost entirely on Ancient Artifacts, making our favorite part of the original game even more engaging.  The changes are relatively minor, but the impact is very fun, and I cannot imagine playing the game without their inclusion.

We had a great time with Conquest of Speros; it manages to pack a lot of smart, tactical gameplay into a very small box.  Portable, fun, strong with 2 and better with more, Conquest of Speros is an easy addition to the collection and lots of fun!

Deploy your minions to capture a copy of Conquest of Speros and the expansion Lost Treasures right here!

(Thanks to Grey Fox Games for helping us get our hands on Conquest of Speros.  The tiny minions of their generosity did not capture the influence of our opinions)

2 thoughts on “Conquest of Speros Review”