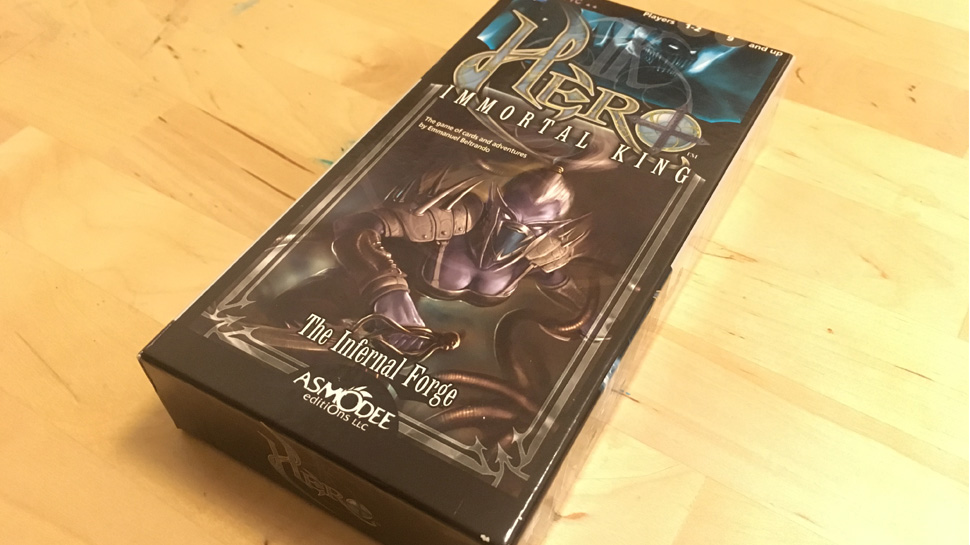 Pretty much any game that offers solo play will get my attention, and that’s exactly what happened when I spotted Hero: Immortal King – The Infernal Forge – from designer Emmanuel Beltrando and publisher Asmodée Editions – on the shelf. Never had the chance to try it out, though. Until now, of course.

So, how does this solo-able dungeon adventure hold up?

The Infernal Forge is a fairly straightforward game about fighting your way through a dungeon and clobbering the jerk in charge – or getting chased out in the process. Each set in the Hero: Immortal King series features a different assortment of monsters, traps, heroes, and items but the basic idea is still the same. It’s a pretty nicely streamlined system (save a few things like having to constantly refer back to the manual to figure out what a given dungeon card ability means) involving simple decisions and the luck of dice rolls – and it’s much more entertaining than Dungeoneer – but it’s not terribly satisfying.

The basic setup has you create three separate decks of cards to represent different areas of the dungeon. You need to fight your way through the monsters and avoid the traps in these decks until you finally manage to clear at least one of them – then it’s just a matter of defeating the boss monster at the end. Actually getting through a deck is easier said than done, of course. Different types of monsters can have different special abilities, some traps are significantly tougher to disarm under certain circumstances, and if you fail to roll high enough then bad stuff starts to happen.

Your heroes won’t go down without a fight, of course. You can bring one, two, three, or four of them along with you, with the the total head count affecting how much (or how little) gear you can start with. Each hero has a different skill, special ability, and ultimate power to consider when you set up your team. Or you could just randomly select them from the pile if you’d prefer. Regardless, there is some strategy in how you create your team and how you decide to tackle the dungeon’s challenges.

In a two player game, one person controls the heroes and the other is in charge of the dungeon. Running the dungeon is pretty simplistic, honestly, with little to do aside from occasionally shifting the dungeon decks around or powering-up monsters using tokens earned every time the heroes mess up. Having a rival players makes for a slightly more interesting game, but there’s just more to do as the heroes.

The solo mode is pretty similar to a regular game when playing as the heroes, with a couple of small rule adjustments and a chart used to keep track of the effects that will kick in as the dungeon earns more ‘the heroes screwed up’ tokens. It works pretty well for the most part, though I found myself having to reference the manual more than I’d have liked thanks to all the miscellaneous factors that can come into play.

Hero: Immortal King – The Infernal Forge just didn’t do it for me. I mean it’s alright, and I’ve definitely played worse solitaire games, but it just isn’t all that exciting. Plus sometimes the intricacies of the cards can feel way too fiddly.