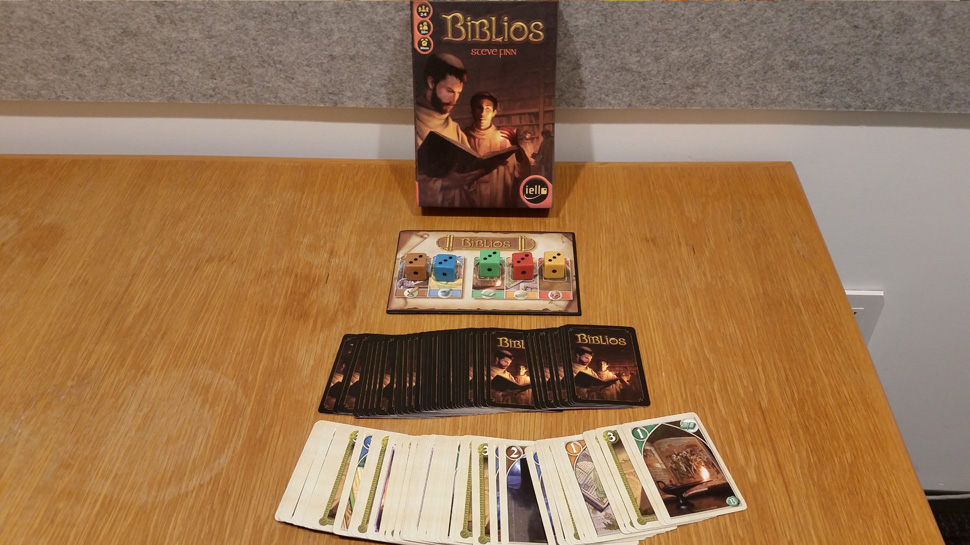 Biblios, designed by Steve Finn (presumably the mild-mannered alter-ego of the intriguing Dr. Finn)  and published by IELLO Games (Welcome To Dungeon), is a very cool card drafting, set collection, auction-based hand management game…but nowhere near as complicated as I make it sound, just now.  It combines these game types into a unique whole, as players-

Jess:  Wait, why does the box look sort of like a book?

Andrew:  Oh, because we are playing as the heads of medieval monasteries, each competing to have the most desirable library.

Jess:  THIS IS A GAME ABOUT BEING A LIBRARIAN?!?

Andrew:  Whoa, geez, calm down!  It’s not about being a librarian!  The game itself is actually pretty abstract, but really, because the theme is about preserving ancient tomes, it’s really more about being a chief archivist rather than a-

As I was saying, Biblios is a card game, combining several gameplay mechanisms into a clever, whole.  Designed for 2-4 players, each game of Biblios flows through two phases and will take around 20-30 minutes (or more, if your friends are agonizingly AP-prone).

As the curators of these illustrious collections, players will vie for dominance in the five scoring categories: Pigments, Monks, Holy Books, Manuscripts, and Forbidden Tomes.  They will build a hand of cards representing their investment in these five categories, with the majority-holder taking the points for the category at the end of the game.

Jess:  All’s fair in the cut-throat world of libraries.

Biblios is played over two main phases, with end-game scoring thereafter.  During the Gift Phase, players will take turns drafting cards from the central deck (based on the number of players), either assigning them to themselves, to a public space (to be drawn by the other players), or to a pile reserved for the Auction phase.

There are three flavors of cards.  Category cards are primarily used to determine category majority at the end of the game.  Gold cards are used to purchase cards during the Auction phase.  Finally, Church cards are used to increase or decrease the value of categories for scoring purposes.

The clever challenge of the Gift phase comes from the fact that you draw your cards one at a time and must decide where each will be allocated before the next is drawn.  So deciding what cards to make available to your opponents, for example, is complicated by the fact that you have no idea whether the card you’ve just drawn will be more or less valuable than the next.  Will you snag a card for yourself, or will you risk losing it later by adding it to the Auction pile?  Do you risk passing up on Church cards for fear of your opponent manipulating the value of categories against you?  Strategy abounds!

Once the entire draw deck has been exhausted by successive rounds of drafting, the game moves into its second phase, the Auction.  In that phase, one card at a time will be revealed from the Auction deck (which you built over the course of the Gift phase), and players will take turns bidding on those cards with the cards they have gained during the Gift.

Jess:  You know, you keep talking about cards, but I see a tiny, pretty board here.

Andrew:  Yes, that’s the Scriptorium, but it doesn’t directly have anything to do with the cards.  It’s to hold the dice.

Jess:  Dice now?  I thought this was a card game!  I need to file this game into its appropriate section, but you keep changing its vital attributes!  How am I supposed to write up a good finding aid for it, let alone choose a method of preservation, if you keep altering the source material?!

Andrew:  You’re a little scary when you go ‘full archivist’, you know that?

The Scriptorium and its dice are what show you the current value of the categories.  These dice aren’t rolled, rather, they are adjusted up or down as players influence the church via Church cards.

In the Auction phase, cards set aside during the Gift are bid for, with players still angling to control valuable categories and devalue those held by their opponents.  Once all the cards are auctioned off, category majority is calculated and points are awarded, with the most valuable collection the winner!

Jess:  Ok, so, we love this Biblios.  It’s an excellent light-weight game that is just barely heavier than ‘filler’ status (it’s a touch thinky to be called a filler, but it’s still light and easy to learn).  Steve Finn’s design is lean in the best way, without an ounce of unnecessary mechanics to be seen.

Andrew:  Agreed wholeheartedly.  It’s a beautiful 2-player game that scales up very nicely, and manages to feel different at every player count.  It takes card drafting, a relatively simple mechanic, and makes it really interesting.  Almost every drafting game makes you think about ‘what I’m handing my opponent’, but Biblios makes it even more engaging because you are all building each other’s hands in a very direct way.  And then the auction comes in to throw some chaos at you.  Good stuff all around.

The most fun part of Biblios is the interplay between opponents.  During the Gift phase, a smart player will strain to keep track of what they are giving to their opponents and to pay attention to what is being handed to them.  Interestingly, these exchanges are always additive, and the most damaging thing you can do is give an opponent cards that will give them majority over a scoring category you plan on torpedoing.  The Auction provides a different kind of interaction, rewarding you for timely bids and careful use of the Church cards to elevate the value of your own majorities while undermining everyone else’s

Andrew:  Biblios may sound a little cut-throat and it sort of is?  Kinda?  Generally, the most aggressive thing you can do is spend Church cards to incrementally lower the value of a category you know a rival has majority over.

Jess:  But honestly, as a group that doesn’t particularly like ‘take that’ style gameplay, Biblios is nothing so aggressive that we can’t enjoy it.  There is just enough contention to make the game interesting, no matter what the player count.

We think that Biblios is a great game, playing any of its player count in a fun, engaging way.  It’s not the most theme-rich game out there, but it benefits from tight gameplay and just enough indirect contention between players to keep things going.  Oh, and it’s a total bargain, price-wise.  We happily recommend it!

You can order Biblios directly from Dr. Finn Games!

One thought on “Biblios Review”