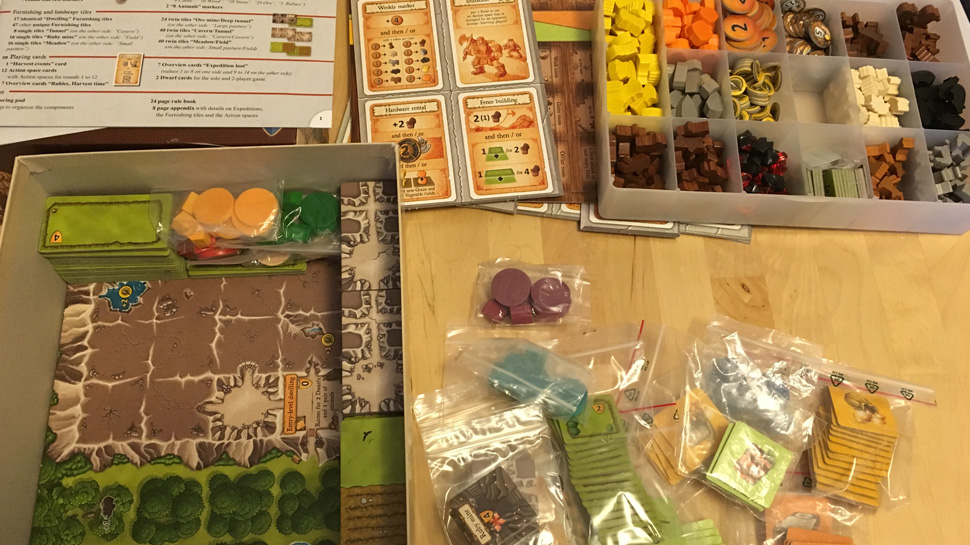 We here at Gameosity spend a lot of time discussing things like clever mechanics, pretty artwork, and interesting themes – especially those themes. However, there are other aspects to many board games that can make or break someone’s enjoyment, and sometimes they can be hard to pinpoint. Thankfully I have lots of time on my hands and like to talk at strangers on the internet, so I’ve taken a crack at shedding some light on this bizarre phenomena.

The intention is definitely to help players in knowing what to look for or avoid, but I’m also crossing my fingers in the hopes that developers might also consider these odd little X factors in the future. Because at the end of the day, we all just want to have fun with our games.

Let’s face it, no matter how much you may like playing a game, sometimes you just won’t feel like going through the hassle of setting it up. This tends to be less of an issue when you have a larger group to help you unpack everything – especially if most of the other players know what they’re doing – but it can still be a pretty big deterrent when there are other speedier options available. Take Caverna, for example. I really like Caverna. Problem is it’s a pain in the butt to open up and separate all those bags of meeples, lay out all those tiles, place all the rooms on the board, find the appropriate pieces to fit the number of players, and so on. Granted there are storage options that can help speed the process up, but unless you want to spend extra time or money prepping everything you’re going to be stuck with a less elegant solution. One that’s, as I’ve mentioned, a pain to deal with.

Mansions of Madness is another good example of a fun game that’s hampered by an obnoxiously drawn out set-up time. My goodness it takes a while. On the rare occasion that we end up playing, our group usually leaves all the set-up to Andrew (ever the game master) while everyone else plays something else to kill time. Yes, it’s that bad.

Putting everything back in the box can also be annoying, especially if you have pets or children and can’t get away with leaving everything out until you can get to it later. It’s not as bad as that initial setup though, since you could always just unceremoniously chuck everything in and be done with it.

Like it or not, this can often make the difference between a game hitting the table or staying on the shelf. If the set-up process takes too long, is overly complicated, or is flat-out dull, chances are the response is going to be something like “Ehhhhh, I don’t really feel like playing that right now.”

When I refer to turn length I’m not talking about Analysis Paralysis, but rather about games that force players to take too much time with their turns. This could include a large number of individual steps, convoluted rules that lead to a lot of backtracking/retconning, or needlessly repetitious processes (I’m looking at you, Onirim, with your near-constant deck shuffling).

This can be a tricky problem to peg to specific games because sometimes it could very well just be a case of AP, but there are definitely some games out there that push this whole “patience” thing a little too far. Cooperative games like Eldritch Horror balance out slightly longer player turns by keeping the other players interested in what’s going on (you know, because you all have to work together), but when you’re playing something like Apex (yes, I love Apex, but that doesn’t mean it’s perfect) it’s much more noticeable since you have so little reason to pay attention to other players’ turns. So you just sit there and wait for your turn to come up again, while everyone else is off kicking dinosaur butt.

Mage Knight is another prime example of how much personal downtime can sap the fun out of the experience. Playing solo or with one other person is fantastic. Start adding more people and suddenly you’re in the kitchen making yourself a sandwich because you’re ‘bored hungry’ and have more than enough time to do it.

Now I’m not saying that all games need to keep turns short and sweet, but if everyone is most likely going to be spending a few minutes doing stuff one at a time then at least try to make that downtime engaging for everyone who isn’t taking actions.

Speaking of the amount of time we spend trying to enjoy ourselves, game length also plays an important role in enjoyment. Now I’ll freely admit my friends and I tend to prefer shorter games, and I understand that sometimes people want to enjoy something akin to a tabletop epic, but I think there’s a limit to what the average player can endure.

I don’t have a magic formula for figuring out optimal time limits or anything, because a lot of that depends on the game being played. For example, I don’t mind playing Suburbia for over an hour but my mind would probably start to wander if a game of Machi Koro went on for that long. This is also the main reason why I don’t play Risk anymore – I don’t enjoy it enough to stick with it from start to finish.

Again, I’m not saying all games need to be short. I’ve actually enjoyed playing Twilight Imperium quite a bit. I’d never be able to handle playing it more than once per year, but setting a day or two aside to manage my own sprawling space empire every now and then is totally fine. It’s when long games overstay their welcome that it becomes a problem. Or even worse, when short games overstay their welcome. I’m glaring at you, Munchkin.

Unfortunately this is the kind of thing you just have to feel out. But definitely avoid Munchkin. And Fluxx.

No, not like that. Get your mind out of the gutter. I’m talking about game components that are, for one reason or another, a pain in the butt to deal with. Small pieces that can easily get lost, cardboard tokens that spend more time stuck to your arm than they do on the board, excessively bouncy dice, and so on. When I play a game, I play to have fun – not to spend half my time hunting down something that fell off the table for the sixteenth time.

From the roll-happy space Tic-Tacs in Galaxy Trucker to the clever but still kind of irritating sliding trays in The Battle at Kemble’s Cascade, having to deal with annoying components can really affect the fun sometimes. Not just because it can involve chasing things that don’t want to sit still around, though that’s certainly a big part of it, but because it makes actually enjoying the game feel more like work. It gets tiring having to constantly nudge pieces back into place because the board is covered with cardboard tokens that just love to slide around with the slightest breeze, nudge, or funny look. The need to dig through a pile to find one specific token out of dozens interrupts the flow. And then there are games like Star Explorer.

Now I think Star Explorer is very cool, in theory. It’s basically like playing an episode (or even an entire season) of Star Trek, with randomly generated planets to explore and randomly generated problems to solve. You send down away teams. People die. It’s a good time. But the components (specifically in the Goblinoid Games version available at TheGameCrafter) are kind of awful. The rulebook has all these tables you need to determine challenge successes and whatnot but there’s no quick reference guide. The board is just folded posterboard and doesn’t like to lay flat. And the pieces themselves are tiny squares you have to cut out yourself, also made from the same posterboard, and they don’t even include all the tokens you need (one entire crew type was missing from all player colors in my set)!

In practice this makes for an incredibly awkward game. Mechanically it’s fine, but physically it’s a mess. The pieces slip all over the place and can accidentally be blown around with very little effort. Actually sorting and storing hundreds of tiny paper squares is a nightmare. Simply unpacking everything is a huge pain.

Not much can be done about Star Explorer at this point, aside from spending a bunch of time and money to make your own custom set, but more modern games still have the power to put a stop to this. Everything doesn’t need to be a 3D sculpted miniature or include cards with a canvas-style finish. They just need to work well together. Take the physicality of gameplay into account. And for the love of all that is good don’t make players physically cut out hundreds of tiny squares!

What do you all think? Is there something (or somethings) nobody else seems to notice that can seriously impact your board game enjoyment? Does none of this stuff matter to you at all? Don’t you just hate it when boxes are too big? Chime in below and let us know what you think!

7 thoughts on “Important Board Game Stuff Nobody Really Talks About”