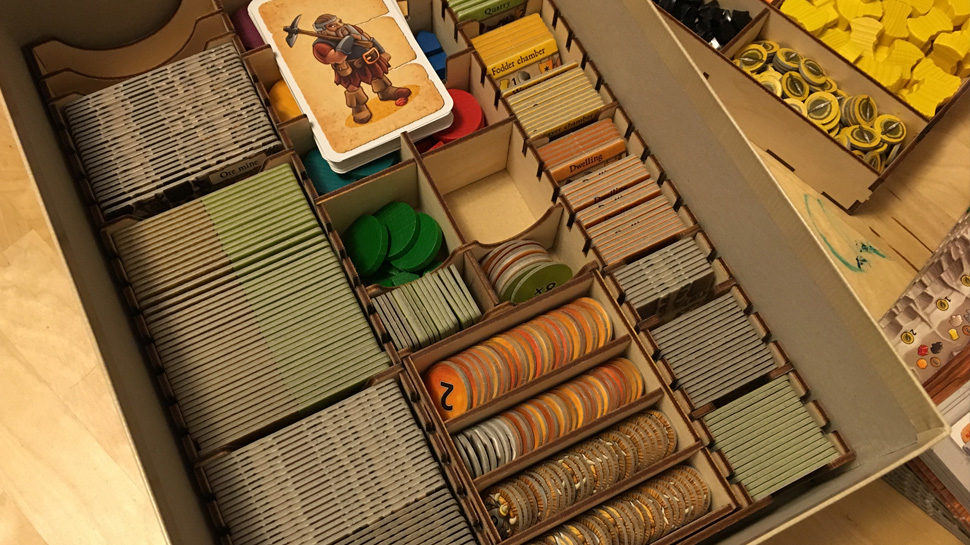 Component storage and organization quickly becomes a concern for anyone who’s even a little serious about board games. And there are as many ways to keep all those meeples and dice and cardboard counters separated as there are board games in the world. Okay maybe it’s not that extensive, but there are certainly a lot of options. Some people use zip-top bags, some make their their own inserts using cardboard or foam core or whatever else they can get their hands on, and some make liberal use of organization containers for fishing or jewelry making supplies.

Andrew:  Amazon.com thinks I’m a fisherman, for all the Plano boxes I’ve bought.

Then there’s the stuff from Broken Token.

At around $30 and up, these custom wood inserts might seem a little daunting. But if you have a mighty need to keep your components in line they’re worth every penny.

Of course not all board games need fancy wooden organizers – heck, I own a couple of games that don’t need any organizers whatsoever.

Ahem.  And whether or not a particular item on your shelf needs anything more than a few baggies is largely a matter of preference. But if you’re even slightly tempted by the idea of getting inserts that have been created specifically for certain games then you shouldn’t hesitate.

I was on the fence myself about getting one for Caverna, because Caverna desperately needs something more than just a jewelry organizer and some bags. At least it does if you want to be able to set it up and break it down in less time than it’ll take you to play (yes this is an exaggeration, but Caverna owners know where I’m coming from). I kinda sorta tried to do without for a while, but my solution was kind of a pain to unpack – to the point where I didn’t really have the desire to play all that much. Then Diana went and got me the Broken Token insert for my birthday and now I’m wondering why I waited so long.

Some (okay, all) assembly is required, of course. I imagine it’s to make shipping easier and to reduce costs, and I’m okay with that. I kind of like putting stuff together sometimes – it reminds me of how I used to build models when I was in high school.

Rob:  Said the guy with a glass display case for his Legos?

Rob:  I agree.  And they are also a kind of model.

Andrew:  No they aren’t!  They’re toys!…that you put together yourself, from detailed instructions oh DAMN it.

Anyway, everything comes on wooden sheets that have the pieces pre-cut into them. Don’t worry though, this isn’t some cheap balsa wood type material. It’s relatively thick and sturdy, especially once everything is put together.

The assembly was something of a process but not because it was complicated. In fact, it was pretty easy. If you’ve ever put furniture together (IKEA or otherwise) then you shouldn’t have any problems here. The only reason it took me a while was because I had to (delicately) connect most of the pieces using a rubber mallet. Most of it held together really well but I did end up using some wood glue in a couple of spots that were a little loose, and for some added general solidity. All together I don’t think it took more than an hour, minus the time spent waiting for the glue to dry.

The finished product is seriously impressive. The trays fit almost perfectly, with only a tiny fraction of an inch between their edges and the box. Everything is incredibly sturdy, there’s a place for all the components with some extra room left over for possible expansions, some of the storage areas are adjustable, and there are even symbols pressed into the wood on the meeple tray to show what goes where. But I think the most impressive thing is how it all fist together, with the bottom tray holding most of the components like tiles and player pieces, the top tray sitting on top of that and holding everything in place while also storing the meeples, then the player boards sitting on top of that and making sure the tiny wooden sheep can’t go anywhere. It all fits very snugly with the lid just barely lifted due to the width of instructions. Yes, it’s that tight a fit. You can even stand the box up on the shelf and nothing will spill out because it fits together so well.

Impressive amounts of functionality aside, it just looks pretty. The lighter surface of the wood and the darker edges where the cuts were made create one incredibly attractive organizer. I’d almost go as far as to say it looks artisanal.

I don’t see myself getting a Broken Token insert for every single game I own and that they’ve actually made stuff for, mostly because I don’t think they all need super fancy organizers, but I’m exceedingly happy with my new Caverna storage system. It makes everything so much easier, and it looks nice to boot!

You can snag the Caverna insert from Broken Token here, as well as inserts for other great games.

8 thoughts on “Yes, Broken Token Inserts Are Definitely Worth It”