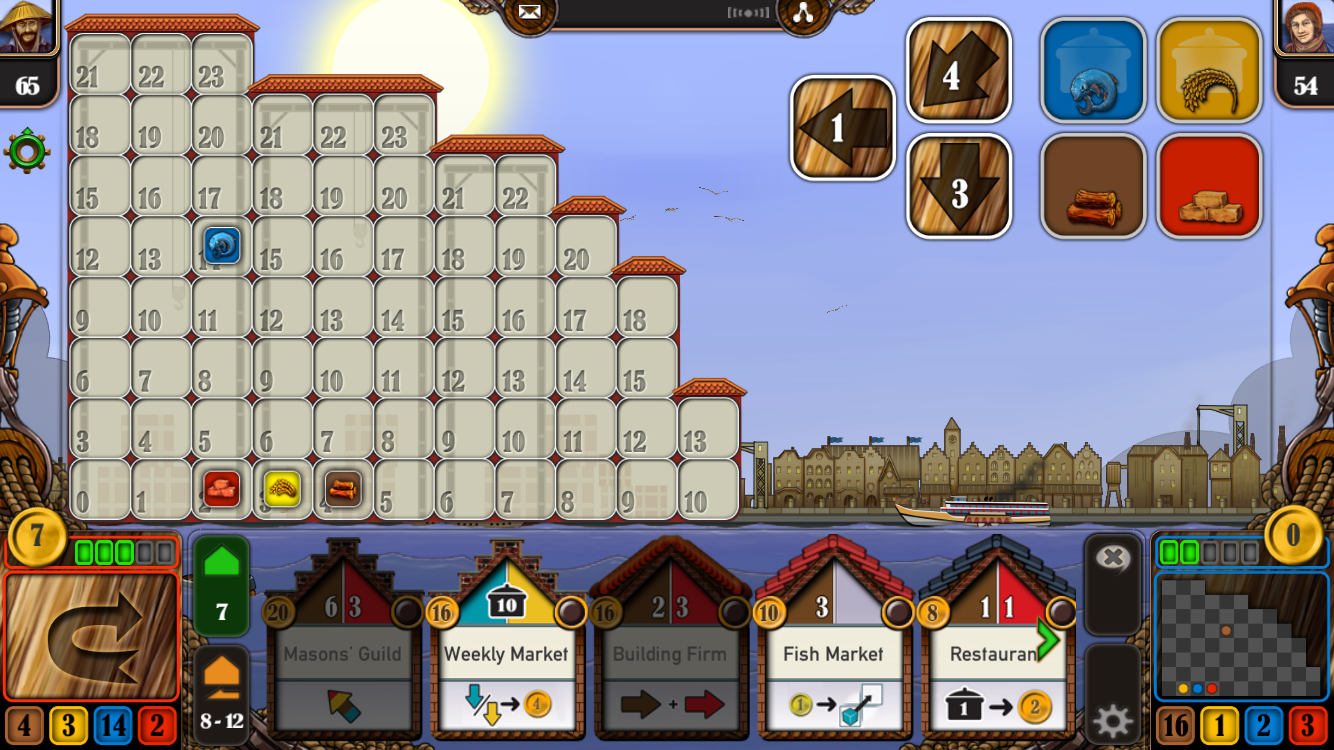 I “Le-Hove” Le Havre (see what I did there?). Seriously, it’s probably my favorite Uwe Rosenberg game that I’ve played so far – although admittedly I haven’t played all of them. Still, Le Havre is a fantastic 1-5 player game about managing resources, building a port town, placing workers, and shipping goods. Le Havre: The Inland Port is sort of like a Cliff’s Notes version that’s designed for a total of two players. And now, thanks to DIGIDICED, we can play it on the go.

The physical version of Inland Port is something that I honestly don’t have any first-hand experience with, but unlike the Codito Development digital port of the original game (with it’s super tiny everything and lack of proper explanations) that’s not really an issue in this case. The in-game tutorial goes over all the basics step by step, and since things aren’t quite as complicated as the larger game it’s a lot easier to figure out effective strategies. At least on the average difficulties.

So the point of Inland Port is to have the highest score after the end of twelve days (i.e. rounds). You do this by stockpiling Francs (because it’s set in France, naturally) and by amassing tons of equity earned from constructing buildings. It’s very similar to the original Le Havre, honestly, but a bit less complicated and it plays much faster.

There are so many things I enjoy about Inland Port’s design that I’ll just get this out of the way now: if this review piques your interest, buy it. Each building, whether you own it or not, can be used to benefit you in some way (earning resources, exchanging goods for Francs, etc), but what’s really interesting is how you’ll be forced to sell a building at half its value if it isn’t used. But that’s offset by the fact that you stand to get a lot more from using a building if you let it sit idle for longer. It’s a very clever system that balances risk and reward extremely well and encourages some interesting strategies. For example, sometimes I’ll skip on using a building owned by my opponent, even if it would be beneficial, because using it would keep it from being sold – and thus losing them points.

I also think the resource management mechanic is pretty cool. Rather than simply holding on to tokens or moving counters along a slider, you’re presented with a tapered grid. Sliding a counter from left to right will decrease/increase the amount of that good by one, but sliding it up or down will shift the numbers by three, and diagonally up and right/down and left goes by fours. This in itself isn’t all that impressive but many of the buildings you can use will change the number of a given good by directional arrow rather than by a flat number. And the overall number of moves a good will make along the grid in a given direction ties into how long it’s been sitting around without being used. So if you plan things right you could end up earning a lot of a given resource in a single move.

It all ties together incredibly well and creates some really interesting moments where a well-timed move could earn you over a dozen of something, which you can then spend on a subsequent turn to build another something worth lots of points. The shifting grid takes about half a game to get used to, but it won’t be long before you to start paying more attention to where each counter is on the board. rather than simply how much of a given resource you have.

That’s how Inland Port works in a nutshell, but how well does it fare as a mobile port? Well, it could do with a better way to speed up board refreshes at the start of a new round (especially towards the end of a game when there are usually quite a few buildings to shift) than simply changing the game’s speed in the options menu, and I’m not crazy about how long I have to tap and hold on a building to get a detailed description of its effects. It’s also rather irritating how scrolling up and down to see what buildings are in each column (and left/right to see what can be built along the bottom) is so fidgety. I mean it works, but the game usually ends up thinking I’ve selected a building to use, then when I let go it resets the position of the column/row.

Aside from those minor problems though, Inland Port is a solid, well, port. It’s easy to tell what’s going on, the interface is simple but still gives you all the relevant information you need, and it’s just plain fun. Granted it’s fun because that’s how the physical game is, but you’d be surprised how profoundly a bad port can affect an otherwise good board game. Thankfully that’s not the case here.