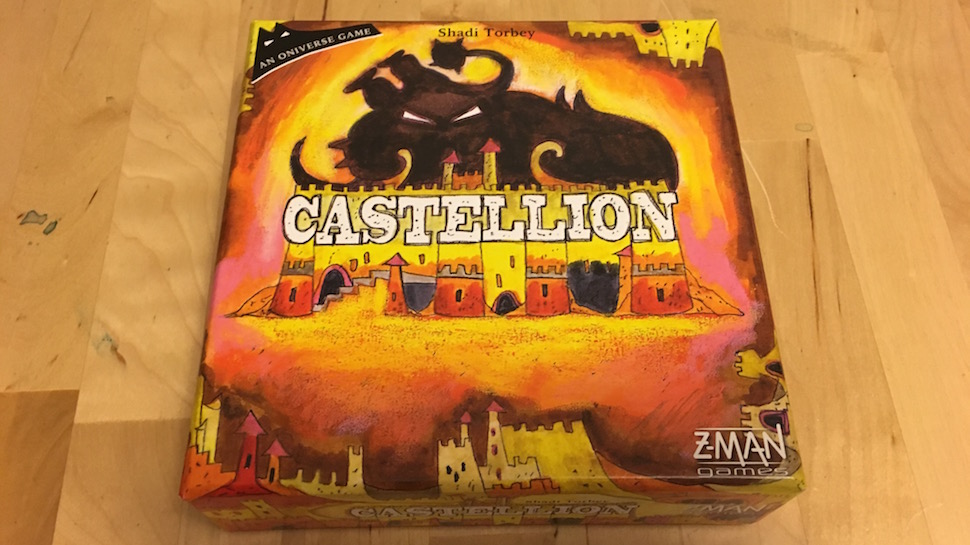 This may come as a shock, but I’m kind of a Shadi Torbey fan. More specifically, I’m a fan of all his “Oniverse” games (Onirim, Urbion, and Sylvion). There’s something about each of them that fascinates me – whether it’s the challenging but simple to learn gameplay, the subtle strategies, the wonderful illustrations by Elise Plessis, or some combination of all of those elements.

So of course Castellion, which is another solo/two player Oniverse game from Shadi Torbey (obviously) and published by Z-Man Games, was an insta-buy for me. Then I played the introductory game and immediately started to regret my purchase.

Rob:  Like that cliffhanger there? Yeah, I know, I’m a jerk. Truth be told I actually really like Castellion. In fact, it’s managed to edge out Urbion as my favorite Oniverse game, which is pretty miraculous if you know how much I love Urbion. So why wasn’t I thrilled with it when I first started playing? To put it simply, the basic tutorial-style game is extremely boring, frustrating, and just plain not fun.

The basic idea of Castellion is to build a castle that can withstand a total of three “Ordeals.” Depending on the difficulty you’re playing they can vary from manageable to nightmarish, and you get to randomly select some of them each time you play for some added variability. Actually completing an Ordeal means having the correct sets of color-matched castle tiles to act as a defensive line (as displayed on each Ordeal card). If you can make it through each one, you win! If you can’t deal with each of them in succession then you’re toast. Placement rules for the tiles are a little finicky but it doesn’t take long to get used to it. The general idea is to make sets of four (no more, no less) like-colored tiles in specific patterns.

It’s an interesting deviation from the rest of the series, which up until now has been entirely focused on cards. Having to futz around with 80+ tiles can be kind of a pain. Simply making piles on the table or tossing the 72 regular tiles into the box lid works okay for the most part, but it feels somewhat awkward. I’d recommend getting a small dice bag or something so you can just toss the tiles in without having to worry about making sure they’re all face-down. Plus, thanks to the way the tiles store in the box there’s a perfect spot for a folded bag to sit in the middle of everything – with the added bonus of it probably doing a decent job of holding the cards and Menace pawn down when everything is closed up. Hurray for utilitarian travel-proofing!

So why did I hate it at first? Because “The School of Architects” (i.e. the introductory level) version of the game is random and frustrating without the satisfaction of requiring strategy. You simply blind draw a tile from either the regular pile or the “safe” pile (which has no Traitor tiles that can bring about Ordeals) and place them. You do have to try and complete specific sets before an Ordeal comes up, but that’s all there is. You just place tiles and hope you can place them right. It’s dull, irritating because so much of it is left to blind luck, and I kind of hate it.

“The Admiral’s Academy” and “The Menace” versions of the game, on the other hand, are fantastic. Both still adhere to the same basic idea of laying tiles and creating defensive sets, but now you can use special abilities for each of the four tile colors (Seers, Chameleons, Jugglers, and Pyros) whenever you discard instead of placing them. It adds some very important possibilities such as swapping adjacent tiles, replacing a drawn tile with one from the discard pile, and even removing tiles from the castle itself (which can be extremely useful under the right circumstances). This adds so much more strategy to everything to the point where it almost feels like I’m playing a completely different game. Having more control over what you do after drawing a tile makes a world of difference, as does the added level of difficulty.

Even the little Menace pawn that comes included can be used to add some interesting elements to whatever version of Castellion you decide to play. I’m particularly fond of “The Prison” variant that tasks you with building a jail cell around the pawn in addition to building the castle like you normally would. Of course if you fail to contain the Menace even after completing the third Ordeal you still lose. And failing to finish the prison before completing either of the first two ordeals results in pieces of your castle being destroyed. It’s intense and can be devastating if you can’t finish it quickly enough, but I really enjoy the extra layer of intensity it adds.

Fans of Shadi Torbey’s Oniverse games should absolutely pick up Castellion, no question. Heck, even if you’ve never played any of the other games in the series it’s still a fantastic strategy puzzle thing. Just be aware that the introductory level is extremely disappointing, so please don’t give up on it after trying that simplest iteration. It gets so much better. I promise.