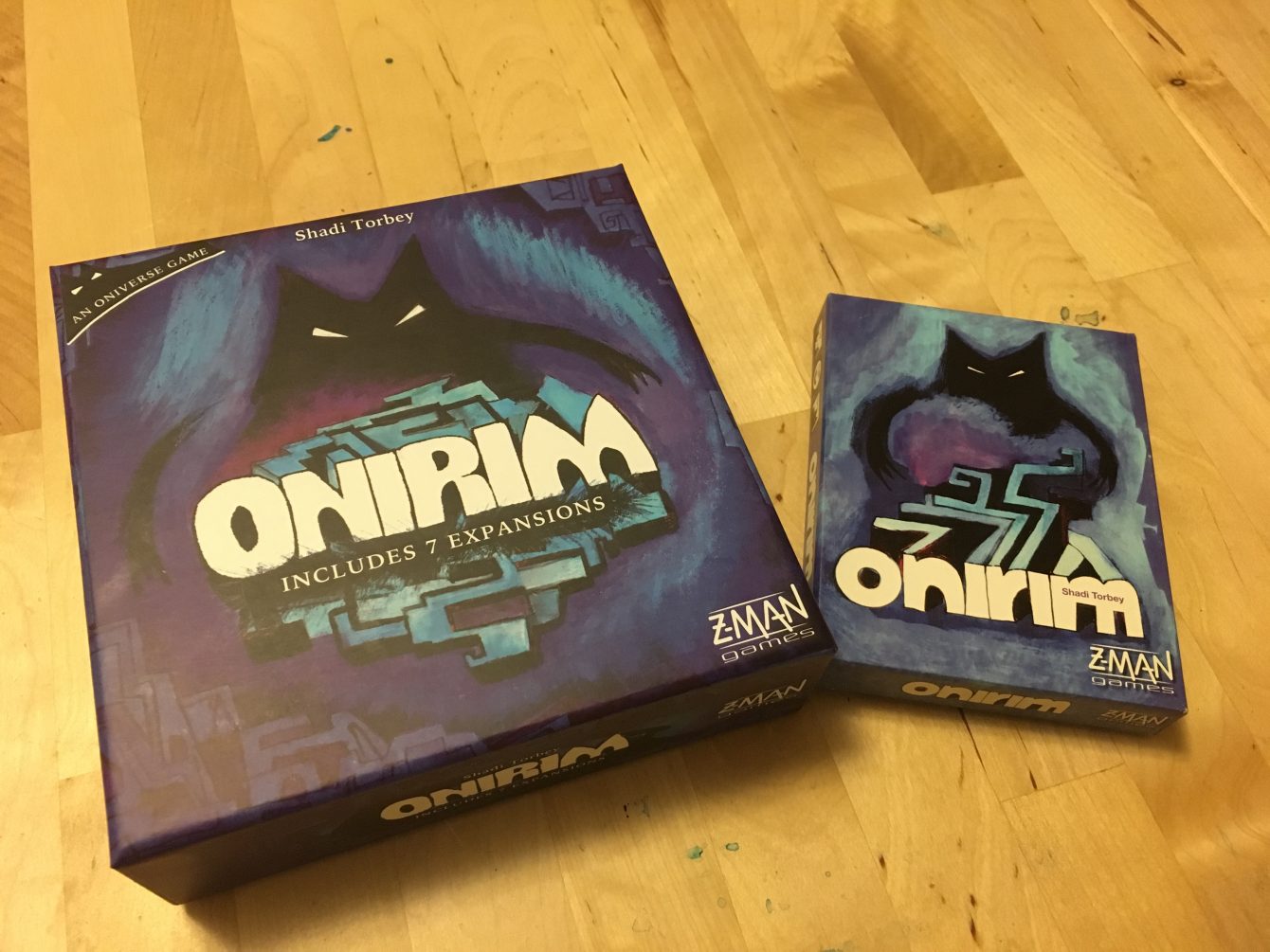 Onirim is where it all began, back in 2010. From designer Shadi Torbey, publisher Z-Man Games, and featuring the wonderful artwork of Elise Plessis, it was the first title in the now four games strong Oniverse series. Last year Z-Man saw fit to release/reprint a second edition, featuring a noticeably larger box and some other stuff I’ll go over in a minute. If you’re a fan of any of the other Onivese games (Urbion, Sylvion, or Castellion), then you’ll probably like Onirim and should probably pick it up. But what if you already have Onirim?

Well that’s what I’m here to answer, by pitting the first and second editions against each other in mortal combat. By which I mean talking about their differences and letting you decide whether or not it’s worth getting the newer version. It may not be as exciting as bloody gladiatorial combat, but it’s definitely a lot easier to clean up.

There are three key differences between both versions of Onirim: the artwork, the components, and the expansions. I’ll be covering each in more detail in their own separate sections but the short version is there’s new art, some new stuff, and some more new stuff. Like I said, I’ll be going into more detail.

As with the original release, Onirim 2.0 features some fantastically whimsical artwork from Elise Plessis. Some cards do use the same art, such as the door cards, the towers from, well, The Towers expansion, and the happy dreams from the Happy Dreams and Dark Premonitions expansion. However, almost everything else has totally new artwork to enjoy. I’m on the fence about whether or not one set is better than the other (though I do prefer the new Nightmare cards over the old ones), but it’s nice to have new stuff to look at. And I have to admit I like how the black borders of the new edition cards fade into the artwork instead of creating a solid frame. It just fits the look better, I think.

The most immediately noticeable thing about the second edition is the larger box. The new Onirim’s box uses the same dimensions as Sylvion and Castellion, which means it’ll look nice on the shelf next to the latter half of the Oniverse series. It also allows for larger instruction books (that’s right, there’s more than one), and has the space for more cards and a cute little Incubus figurine. The lid is also a lot more secure, since the box is deeper, which sort of makes up for the fact that you can’t fit it in a pocket anymore. I’m more partial to being able to toss it in a bag and not worry about everything spilling out, honestly.

The two instruction booklets aren’t as easy to tuck in the box as the two double-sided fold-up sheets from the first edition, but they certainly look much nicer and are easier to use since you have actual pages to reference instead of solid sheets. Then there’s the Incubus figure, which is a nice, study little ominous looking meeple that can be used in the basic game to add a simple new mechanic (with one of three difficulty options) but it really doesn’t add much. I do appreciate its inclusion, though.

Even the cards themselves are different. They’re made of a different stock than the first edition, and they feel… “newer.” What I mean is, the new cards are stiffer, a bit thicker, and a tiny bit slippery when compared to the first edition cards, which feel a little more textured and sort of well-worn. The new cards don’t necessarily feel better or worse than the old ones, but they definitely feel different so at the very least you might have a tough time mixing cards from both sets (if there was ever a reason for you to want to do that). There are also four new expansions, in addition to the three that already came with the original release, which brings me to the next section.

Along with the original three expansions that were included with the original Onirim (The Book of Steps Lost and Found, The Towers, Happy Dreams and Dark Premonitions), the second edition also includes four more entirely new expansions – The Glyphs, The Dreamcatchers, Crossroads and Dead Ends, and The Door to the Oniverse.

The Glyphs: This expansion ups the door count by 4 (for a total of 12 doors to unlock), but it also adds Glyph cards. Glyphs count as a fourth Location symbol (so now you have sun, moon, key, and glyph) that can be used in a chain, which makes it easier to create a set of three matching colors to find a door. Glyphs can also be discarded to trigger an Incantation that lets you look at the top 5 cards of the deck, and if at least one is a door, you can immediately place it and put the other four cards on the bottom. It gives you a little more control over your strategy and adds just a tiny bit more wiggle room, but it also adds more doors to balance everything out. It’s not a terribly complicated addition but it’s the kind of expansion that you’ll probably end up including in each game by default after a while.

The Dreamcatchers: This one definitely makes things tougher, with four extra dream cards (Lost Dreams) that are almost as troublesome as nightmares but also trigger the Dreamcatchers, which will hold them and any other cards placed in Limbo along with them (including other dreams or even doors). So it’s a delicate balancing act. If the Dreamcatchers overload (i.e. all Dreamcatchers have cards on them already and you have to “capture” more cards) then you have to remove one of them from the game – lose all four and you’re done, naturally. You also have to make sure all four Lost Dreams are caught at the end of the game, which can be extremely tricky. And on top of that you still have to find/unlock all eight doors. I like this new addition, but it’s definitely more more advanced players.

Crossroads and Dead Ends: Crossroads and Dead Ends adds a staggering 16 extra cards to an already pretty hefty deck, which can make shuffling and reshuffling even more of a pain in the butt. It includes six “wild” Crossroad cards that can be used as any of the four colors (but must adhere to whatever symbol is on them), and 10 Dead End cards that will choke up your hand. The Crossroad cards definitely help when it comes to placing locations and finding doors, but they aren’t overpowered since you can only use one Crossroad per chain of three. Dead Ends also make things interesting by clogging up your hand (they can’t be played or discarded normally), and they can only be removed either by willfully discarding your entire hand at the start of your turn or by using Nightmare cards to clear your hand. It adds some fairly simple but appreciated new strategies to the mix, but all those extra cards can be a pain to physically manage until you’re able to reduce the size of the deck.

The Door to the Oniverse: Perhaps the most interesting of the new expansions, The Door to the Oniverse adds one extra door (to the Oniverse, naturally) that counts as any of the four colors, and Denizen cards that have a variety of effects. When you draw a Denizen, you can “rally” them by discarding a card from your hand, then placing the Denizen in front of you. After that, you may choose activate their special ability later by discarding the card. And there are eight different Denizens so there’s a fair bit of variety. They’re all helpful in various situations, but the tradeoff is that by discarding a card you have to draw one more to replenish your hand – thus increasing the chances of finding a Nightmare. It will take a while to learn how each Denizen works (though you could just keep the manual open for reference), but I’d consider this another expansion that should probably be left in by default in future games. It adds a nice little extra bit of control to everything that’s balanced out nicely by the need to discard something to keep each Denizen, as well as the extra door.

So between the new components, new artwork, and new expansions, is the second edition of Onirim worth it? If you don’t already own it then I’d say absolutely. Better to snag the version with a total of seven expansions than the one with three. If you do already own it, then that’s really up to you to decide. While the second edition isn’t as portable as the first, the lid is far less prone to pop off and it comes with a lot more stuff. Also the added expansions, while not a total game-changer, do add a very nice bit of variety. Personally, I’m quite happy with the upgrade.