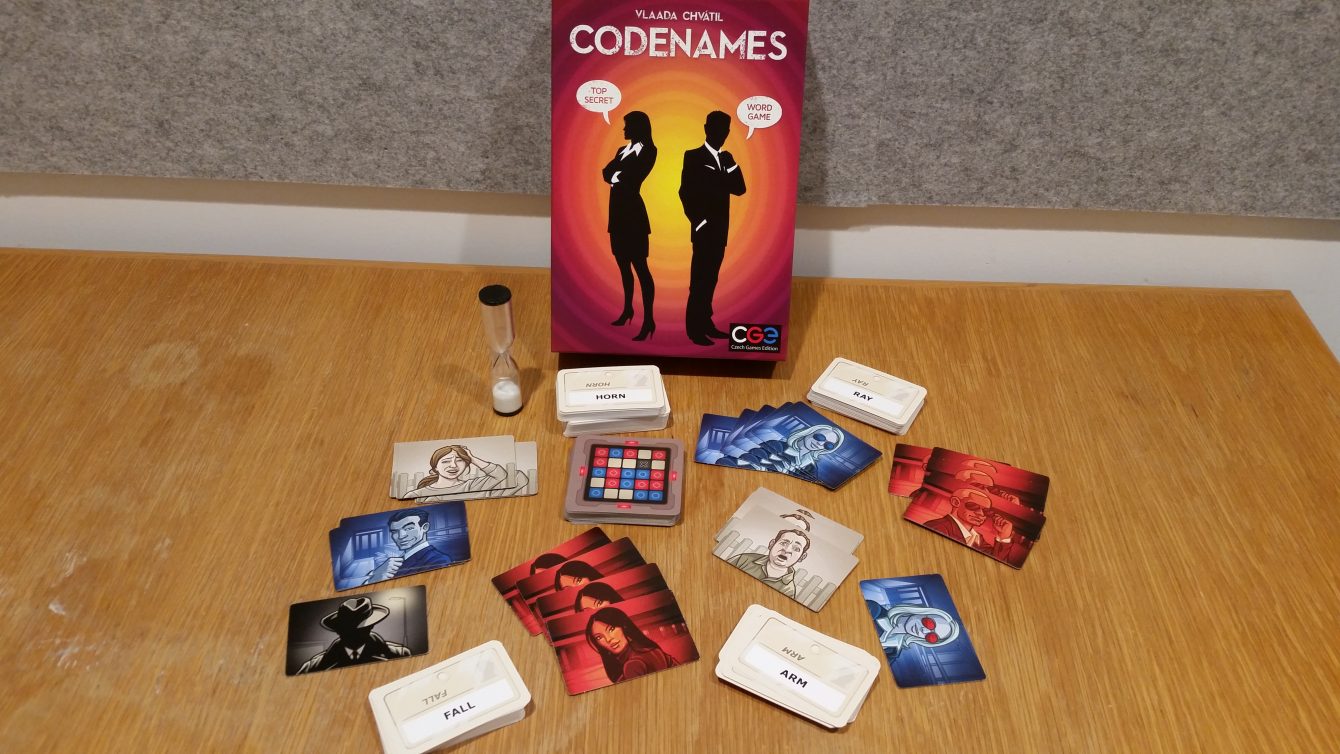 Codenames, by Vlaada Chvatil (Galaxy Trucker, Mage Knight) and published by Czech Games Edition, is a deduction-based party game for 2-8 players.  In it, two teams of competing spies will try to contact with all their agents, who are, of course, only known via their code names.  Each team is trying to contact their agents first while avoiding members of the opposing team, and of course without accidentally contacting the Assassin, who will end the game abruptly (and violently).

Andrew:  Hey, Halloween is close to Thanksgiving!  And its fall, and they’re both ‘H’ words and…ham, you know?

Rob:  Does giving ham qualify as a trick or a treat?

In a sense, gameplay in Codenames couldn’t be simpler.  Both teams will first select a spymaster, and these two spymasters are responsible for doling out clues.  There is a grid of words set up, some of which represent agents of the Blue team, some of which are the Red.  There are also neutral words, as well as the single word representing the Assassin.  Both spymasters have access to all of this information, but can only communicate to their team in a very limited way; a single word and a number.

Diana:  Ok, let’s see if I can do better than you guys…Miniature, 3.

Each turn, the spymaster will say a single word and a number.  This word relates to at least one codename.  It can be any single word, but it cannot be any word on the table, nor a ‘part’ of any word on the table, (Cat, for Catapult), nor can it describe the target word’s position on the board, number of letters, etc.  The goal is to get your team to pick out the right codenames (while absolutely avoiding the Assassin codename, which results in an insta-loss), so picking good clues is critical.

However, Codenames is a race, so going one word at a time will give the other team too much time to find their own words.  That’s where the ‘number’ comes in.  Smart spymasters give clues that can relate to multiple words, and the number indicates how many words they think their team should guess, based on their clue.  The more words you can associate, the more efficient your team’s turns can be.  So Country, 2′ would hopefully indicate to your team that ‘America’ and ‘England’ are both codenames.

Jess:  Of course, that is assuming that there isn’t a third country on the board to confuse your team, or that your team will understand you specifically want the names of countries and not, say, the style of music or maybe some HAM…

Codenames is a really great group game, and it absolutely shines at higher player counts.  It is fair to call it a party game, because it isn’t particularly rules-heavy and it can accommodate a large number of players very easily (including having people jump in mid-game, which is a rare and awesome trait), but it is just a teensie bit ‘thinkier’ than your average filler party game, so keep that in mind; it’s not as mindless or inherently goofy as Cards Against Humanity or Utter Nonsense.  However, just like those games, how enjoyable you find Codenames will depend on your fellow players.  But unlike other party games, which may call on you to be humorous or extroverted, the giggles in Codenames comes from the jarring failures and the goofy clue choices and the unavoidable trash-talk that seems to crop up spontaneously between teams.  I’ve never seen a group play it without having a good time, and that good time is directly proportional to the number of players involved.  Which made me really confused when I realized there was a 2-player option.

The 2 player setup actually introduces the idea of a co-op game, where the spymaster and her agents all work to contact their spies as normal before an automated opposing team contacts theirs (that automation is absolutely simple to implement – they contact one of their spies per turn).  This means that as few as 2 players can technically play together, racing the phantom opposition.

Jess:  While the idea of an optional co-op mode is a nice little addition, we found the game to be limp at 2; there is no banter between teams, no discussion on what codenames to activate, in short, none of the really fun bits.  But mechanically, it was 100% serviceable, and we appreciate its inclusion.

Andrew:  And, of course, there is always the fact that the game has a static number of codenames in it, so you might fear for its replayability.  However, when you realize that the special orientation of the cards is both a factor and randomized, as well as the fact that there are 400 codenames, it will be a long, long time before you run into a replayability problem.

Codenames really does belong in slightly larger groups; even at 4 players, there isn’t quite enough discussion or banter to get the most fun out of the experience.  6 is good, 8 is perfect.

One thing worth mentioning, though; the spymaster has a very different experience in this game than her teammates.  The role of the spymaster is uniquely stressful because the game hinges on your ability to communicate to your team more effectively than the opposing spymaster.  Some folks will find this role so fun they won’t enjoy anything less, some will quail at the thought of taking on that seat.  Personally, we found both sides of the game to be extremely fun, but your group may feel otherwise.

Codenames belongs in everyone’s collection.  It’s that simple.  It is rare that a party game can be so easily accessible to gamers and non-gamers alike and to be completely bereft of enforced crudeness or insults (not that we don’t love us some Rated-R games, mind you).  By having Codenames on hand, you can easily get any group of people into the game and quickly having a good time.  It isn’t likely to see much play outside of that ‘party’ environment, but inside its wheelhouse, it just can’t be beat.

Get Codenames, get the totally optional companion app (iOS and Android), get your group together, and get to guessing!  Those spies aren’t going to find themselves!

(Codenames is currently a little hard to find, so the price is higher than usual, just FYI.)

(Our copy of Codenames was stealthily slipped to us in a briefcase on a train by an operative belonging to CGE.  Neither our cover nor our opinions were compromised by their sharing of information – our review is based solely on our own intelligence)