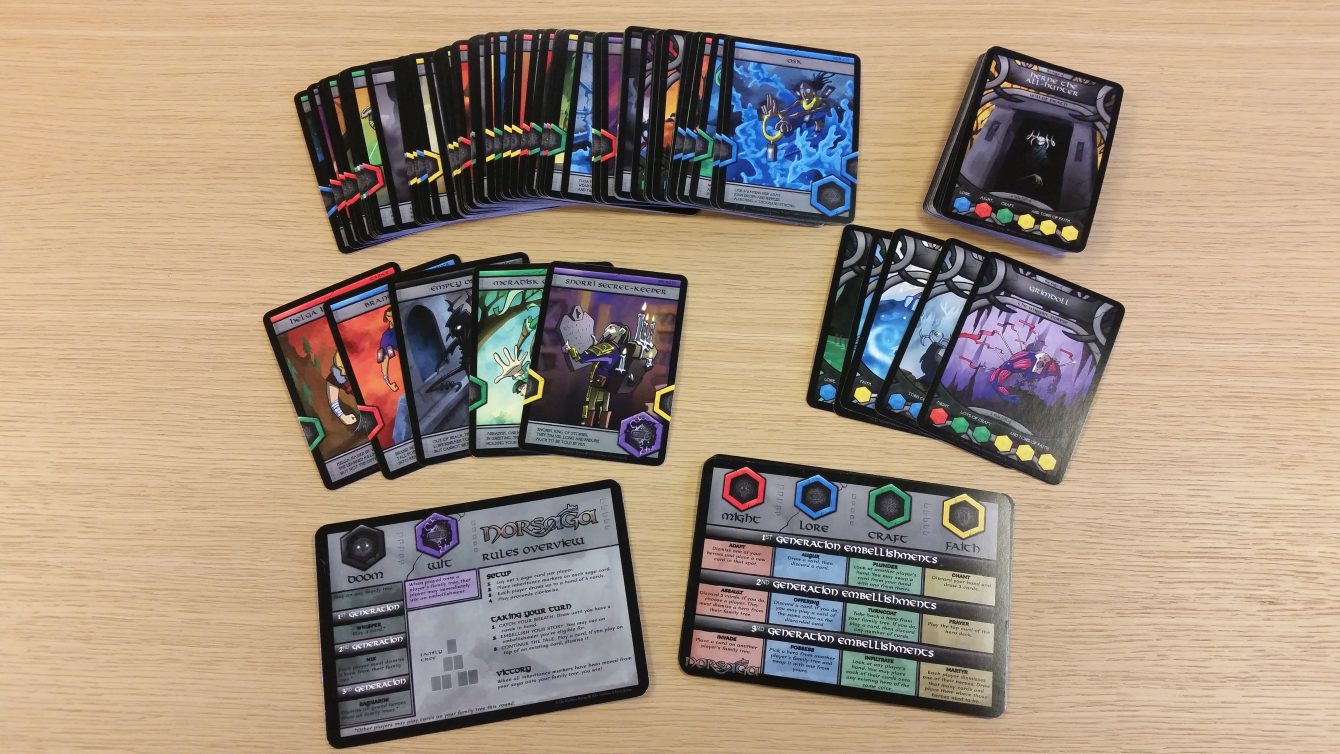 Norsaga, designed by Kevin Bishop and published by Meromorph Games is an interesting combination of set collection and hand management gameplay, dressed up as a Norse boasting contest.  Each of the 2-4 players will tell an epic saga of their lineage, extoling the astonishing traits and deeds of their ancestors in order to prove their own heroic characteristics, which they claim allowed them to overcome some great trial.  Lies, legends, and half-truths will abound as you and your fellows boast and brag, embellishing your own saga while disproving those of your opponents, until finally the greatness of one lineage grows beyond question and they win!

Jess:  Hot dang!  I love some Viking roleplaying!  I can’t wait to design a character!  Should I work on a costume, too?

Jess:  Oh, ok, so we work with premade characters, I guess.  But I cannot wait to get into character and come up with some really amazing boasts that will- 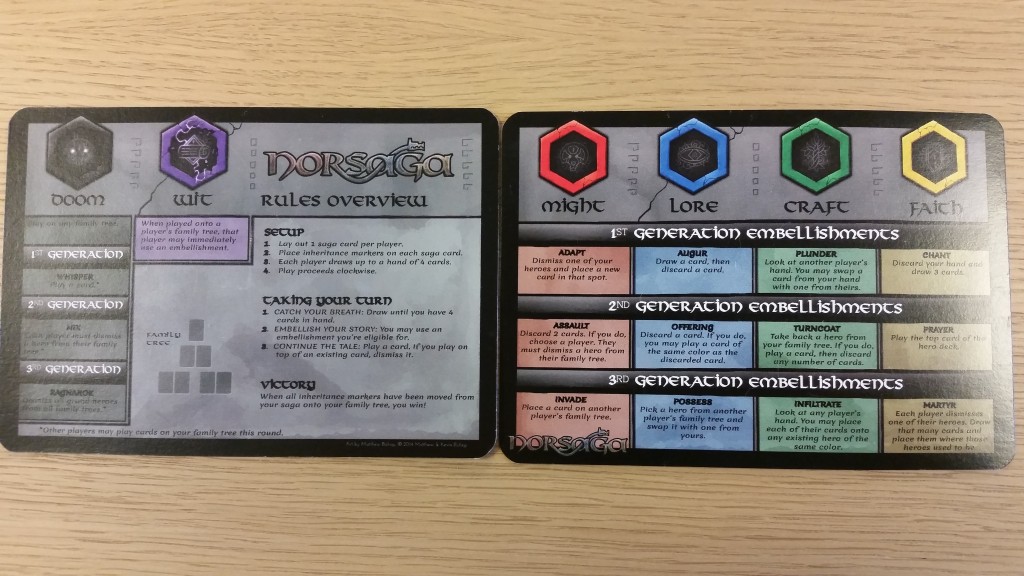 (Just a heads up:  The copy of Norsaga shown here isn’t a full retail copy.  The beads in these photos will be replaced with punched tokens in the retail games)

Norsaga is, at its heart, a puzzle game.  Each player starts with a unique Saga card, which is the story they are trying to tell (which is to say, the colors they are trying to match).  Each of these sagas shows some combination of six trait symbols, which are the traits one would need to possess in order to believably make you the hero of that saga.  The goal of Norsaga is to be the first player to prove that they, as the latest in a line of great heroes, indeed have those six traits, therefore legitimizing their saga and winning the game.  To do this, they will brag about their lineage, pointing out the greatness in their family line that they have had passed down to them.

Each turn in Norsaga gives players the chance to add to their family tree.  That tree has three generations – the top, with one hero, their parents, and their grandparents.  Each Hero card has two traits, one dominant and one recessive.  Heroes will either pass on their dominant trait or their recessive one (but not both), adding that trait to the player’s lineage.  Dominant traits are simply shown on each Hero card, but recessive traits are only passed into the lineage if the hero is matched with another hero who has the same recessive trait.  For each trait inherited, players can move one marker from their saga to their lineage, and when all 6 of the trait markers have been placed successfully in their lineage, they have proven their heroic nature and win the game.

And that’s where the game’s puzzle mechanics come into focus.  The whole Norse storytelling theme conceals a puzzle race, with each player trying to be the first to build a tableau that will accommodate all 6 of their saga’s requirements wins the game.  But what stops Norsaga from simply coming down to the luck of the draw are Embellishments.

Embellishments are color-coded special abilities which manipulate the rules.  Each hero’s dominant trait lends itself to a certain kind of embellishment, and it is the dominant trait of your youngest hero which determines which embellishment you can use on your turn.  For example, if your youngest hero has the Faith trait (which is to say is yellow), you can, on your turn, discard your hand and draw three cards.  Each of the four main trait types has a different flavor embellishment, but all of them let you manipulate either held or played cards in some way.

However, the more heroes in your family tree with the same dominant trait which are directly connected to your youngest hero you have, the more potent that embellishment is. For example, if your youngest hero is red, they have the Might embellishment of Adapt, which lets you dismiss a hero from your lineage and play a card into that space in addition to your once-per-turn ability to add a hero to your lineage.  However, if your youngest hero has a red parent and a red grandparent, then they are a 3rd generation Might hero, and you have access to several more abilities from the Might trait, letting you force your opponents to dismiss heroes from their lineages and even play your own cards into their families to disrupt their stories.

In addition to Embellishments, there are Ghost heroes.  These can be played into your opponents’ families to negate their progress.  However, ghosts have their own trait abilities, all of which are quite powerful, so caution need be taken when using them against your opponents.

Jess:  So, wait, no actual storytelling?

Andrew:  Nope.  And it never claims to be a storytelling game, rather, it’s a game about telling stories.

Jess:  But the theme!  The flavor text!  The amazing art!

We liked a lot about Norsaga.  We enjoyed the puzzle, strategy-driven nature of its gameplay.  We thought that the artwork was absolutely phenomenal, and we really loved the theme and flavor.  It’s quick and light, usually playing in under 30 minutes.  However, we did have two major criticisms of it.

The first is, ironically, because of what a good job Kevin and Matthew Bishop did with their theme.  This game begs to be something other than an abstract color-matching game.  Honestly, I know it sounds nuts, but the stories implied by the art and the flavor text are far more interesting than the gameplay itself ever actually brings out.

And while nothing stops you from playing in a big, theatrical way, there is nothing about the gameplay that supports the awesome theme.  You never really feel like there is a cohesive story being told, because the nature of the game has you arbitrarily swapping out any hero from your lineage as needed, including your youngest hero, who is theoretically the storyteller him/herself!

Jess:  The roleplayer in me just died a little.

Our other criticism of Norsaga is more of a preference thing.  The game is rife with take-that style gameplay.  Lots of embellishments have to do with disrupting your opponents’ lineage, and the powers given by the Doom trait are almost absurdly unfun, causing everyone to lose cards.  However, if no one plays aggressively, then the game is little more than a shuffle-fest, with players just biding their time until they can manage to secure enough of the right cards to win.  And luck does play a huge factor – if you need a yellow trait to win, then there isn’t much you can do but hope to draw one, all the while working to disrupt your opponents so that they don’t manage to win before you.

We liked Norsaga, but we wanted to love it.  This is a game that didn’t quite fit us, but I am certain that for the right group, it will be an absolute winner.  If you are unconcerned with theme penetration and if your group really enjoys gameplay that is somehow both puzzle-based and cut-throat, Norsaga is a gorgeous game with plenty of playability.  If you’re like us and those things aren’t your flagon of ale, you will need to get your Norse fix elsewhere.

Norsaga can be ordered directly from Meromorph Games, along with its upcoming expansion, Into the Myths.  Snag your copy here!

(Our pre-retail copy of Norsaga was sent to us for review by Meromorph Games.  This did not influence our review)

One thought on “Norsaga Review”