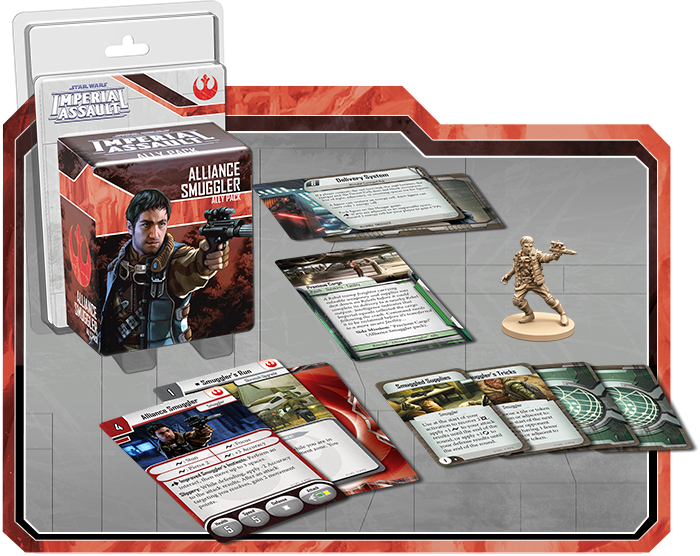 Fantasy Flight Games is previewing the Alliance Smuggler Ally Pack for their 2-5 player adventure game, Imperial Assault. The pack will include one Smuggler figure, new missions, and Mission, Command, Deployment, and Skirmish cards.

Jess: I just watched The Force Awakens (no spoilers, so awesome), so now I am stoked to play this game. This new unit looks fantastic! 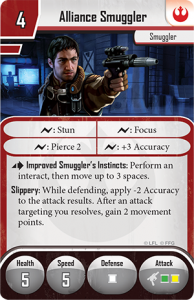 You’ll be able to hire the Alliance Smuggler for two points and he will work as a lone ranged unit. If you double your points you can hire an elite Alliance Smuggler. The smugglers surges can be spent to gain accuracy, pierce armor, or stun targets. The smuggler can also use the “Slippery” ability to reduce the accuracy of any attack made against them. The smuggler also has an “Instincts” ability that lets him perform an interact action, then move up to two spaces.

The elite Alliance Smuggler has improved health, speed, and surge abilities. Beyond that, he can spend a surge to Focus (granting an additional die for his next attack) and he has the Improved Smuggler’s Instincts ability, which allows him to perform an interact and then move up to three spaces!

The new side mission, Precious Cargo, needs you to help a shot-down Rebel smuggler, recover his supplies, and escape before the Imperials show up. If you succeed, you’ll get the Alliance Smuggler for later missions.