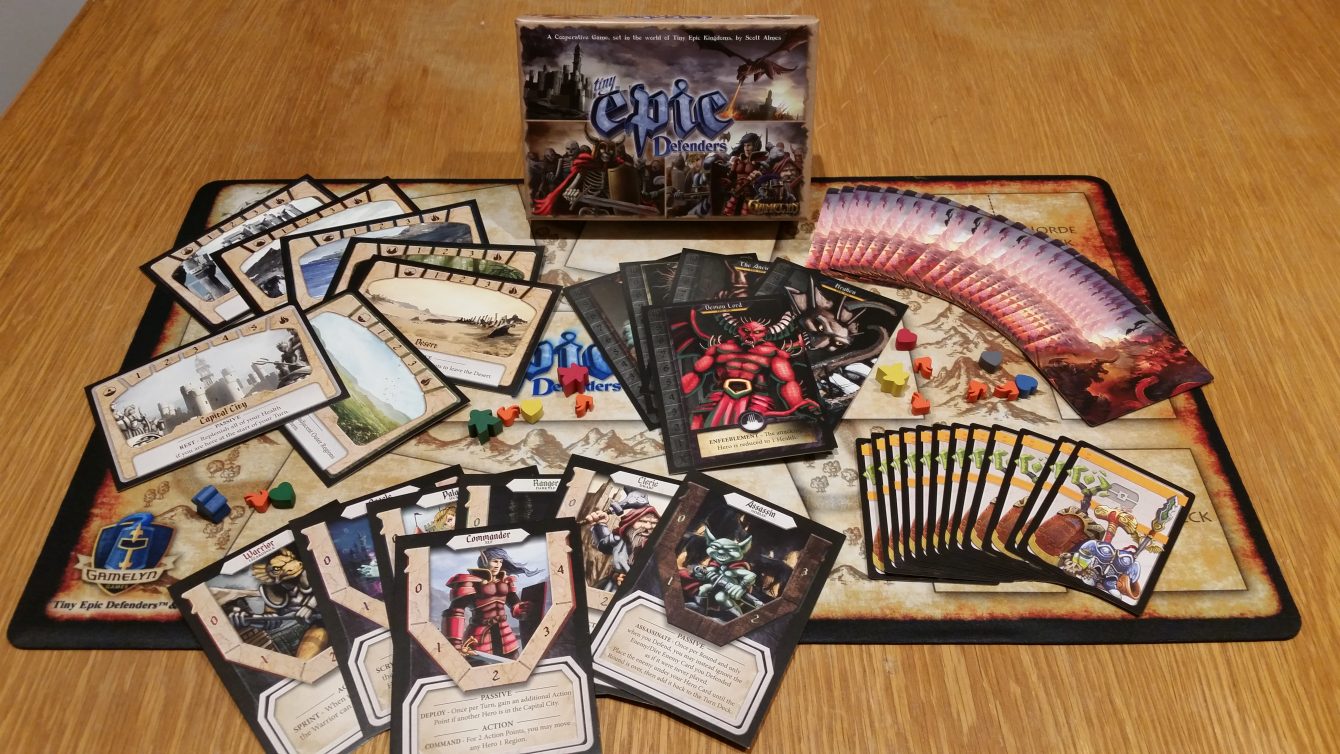 
Tiny Epic Defenders, by Scott Almes and Gamelyn Games (Tiny Epic Kingdoms), is a cooperative area defense game that picks up right where Tiny Epic Kingdoms left off.  Swapping the role selection that I loved in TEK for action-point based, deck-driven gameplay, can this equally pint-sized game match its older brother in terms of playability, depth, and fun?  Let’s find out!

Tiny Epic Defenders is designed for 1-4 players (apparently we lost one in the war) and will almost certainly play out in less than 30 minutes.  In it, each player will take on the role of one of the kingdom’s heroes, charged with manning the walls in defense of the Capital.  The unified kingdom is beset on all sides, with outlying territories under constant attack, not to mention the dire threat of the epic foes, just waiting to swoop in and crush the Capital.  All that stands between the people and total ruin are you and your fellow heroes.

Andrew:  Ok, let’s just get this out of the way – TED and TEK are completely different games.  They exist in the same world and have the same thematic feel, but the two have totally different mechanisms.  While it is tempting to compare them, it just wouldn’t be an apples to apples comparison (I do have to point out, though, that I like TEK and TED way more than I like Apples to Apples, just for context).  So there will be none of that!

Gameplay is driven by the turn deck.  This deck gets flipped over one card at a time, resolving the actions depicted on each card before drawing the next.  Most of these will be cards with enemies on them, which indicate what regions are being threatened.  If a region’s threat level ever maxes out, any further threat added to that region is assigned to the Capital.  And when the Capital falls, we all lose.

However, all is not hopeless!  Mixed into the turn deck are cards in each of the players’ colors.  When those cards come up, that player gets 3 action points with which to take their turn.  Action points can be spent on moving from one region to the next, providing succor to a region you’re in (reducing the threat level), activating a region’s special power, or using one of your hero’s unique abilities.

Andrew:  Just like Tiny Epic Kingdoms, one of the best things about Tiny Epic Defenders is the wide array of heroes to choose from!  The game comes with 10, and another 5 were added as deluxe content, that-

Jess:  You just said we wouldn’t be making comparisons!

Jess:  You have no idea what that word means.

At any rate, TED presents players with an interesting puzzle.  The first time you grind through the turn deck, you will (of course) be taken by surprise, as regions get threat thrown at them nearly constantly.  You will do your best to mitigate that damage, either after the fact (by providing succor) or as it gets applied – heroes currently in a region getting attacked can choose to lose health rather than let the region’s threat increase.  Heroes also have varied passive and active abilities that will help you with your task.

However, once you have run through the turn deck, one card is added to it from the threat deck (composed of more enemies, as well as Dire enemies, which cause even more chaos and destruction with their special abilities).  The turn deck is shuffled and the cycle begins anew.

Jess:  Except this time, you’ve seen what’s in the turn deck, aside from that one new card.  And that means you can start to plan.  For example, if the Plains got hit 3 times over the course of the first round, you know that’s going to happen again and can prepare as best you are able.  Sure, the draw order will be random, but now you have a sense of your kingdom’s most vulnerable spot and can be there to defend them.

Not only will you have some insight into what regions will get attacked, once Dire enemies start showing up, you can turn the great threat they pose to your advantage – if you manage to defend a region from a Dire enemy (which costs two health instead of one), you will get to draw an Artifact card.  These cards provide extremely powerful one-time benefits, letting you turn a potential route into a manageable situation.

Andrew:  All that adds up to a much more strategic experience than what might otherwise have been  a ‘draw a card and see what happens’ kinda game.  I adore me some controlled chaos in my games, and TED delivers a really fun bundle of it.

Jess:  As long as you don’t mind losing.

Each round will see another threat added to the turn deck, making each cycle more challenging than the last.  But only once all the regular enemies have been added to the turn deck does the Epic Foe reveal itself!  Defeating this creature is the key to saving the kingdom.  However, these creatures have tremendous power at their disposal, and they will make short work of your Capital if they are not defeated quickly.  Of course, the regular and dire foes just keep attacking, so you really get a sense of being beset on all sides.

If the heroes can keep the Capital standing long enough to defeat the Epic Foe, then congrats!  You have saved the kingdom and have assuredly earned the title of Tiny Epic Defenders!

Jess:  …But you’re likely going to get your face kicked in.

Like nearly all cooperative games, Tiny Epic Defenders compensates for the players ganging up on it by stacking the deck (literally) against them.  You will find you will often have just a bit too few action points or will be frustratingly out of position when your foes come crashing against your walls.  However, the game’s difficulty is mitigated by the fact that, once you have seen the turn deck through once, you can plan against future attacks.  It is often desperate and close, but eking out a win against the huge wall of foes is all the more satisfying because it requires both luck and guile.

Andrew:  I have heard it said that TED is an automated game, one which essentially plays itself aside from the few choices the players have to make each round.  But I think that it lends a tightness to the experience, and it makes solitaire play incredibly easy to implement.

Jess:  Yeah, and besides, it’s important to keep track of what regions have been/will be attacked, since that info is critical to forming a strategy.  I also like how you don’t know exactly where in the turn deck your own turn is.  It adds neat tension to the game, with every card flip carrying some excitement.

Tiny Epic Defenders is a really solid little tower defense game.  It plays smoothly with any number, going seamlessly from solitaire to its full complement as few games do.  Its rules are simple enough that it can be taught in minutes, making it a really nice gateway game or warm-up, though I wouldn’t recommend cooling down with something that is as occasionally diabolical is this game can be.  And while it is absolutely a luxury, I highly recommend TED fans grabbing the awesome playmat offered by Gamelyn – the structure it adds to the table is really nice.

Andrew:  But playmat or no, we think Tiny Epic Defenders is a really worthy entry in Gamelyn’s excellent line of small-box games.  It brings a uniquely accessible co-op feel in its small (very portable) package, and we think our collection would be incomplete without it!

(Thanks to Gamelyn for the playmat; it complemented our TED experience tremendously!)