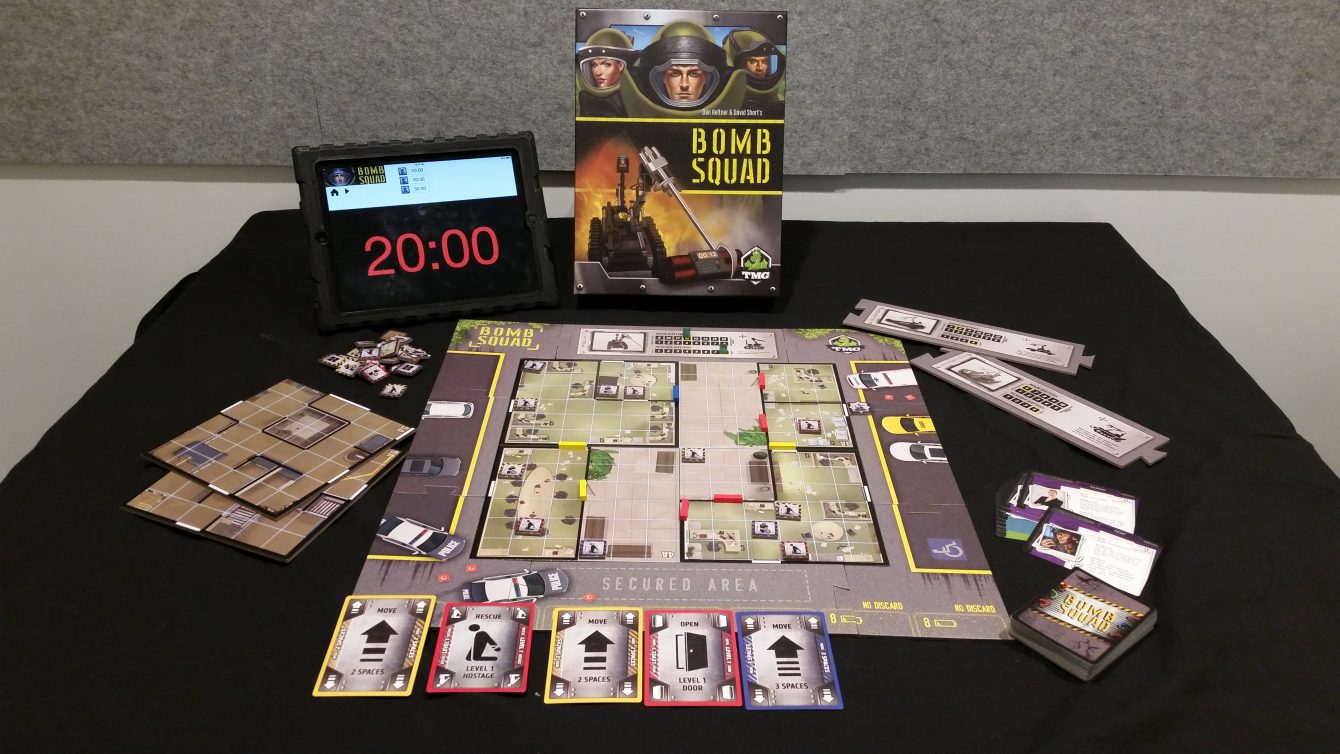 Bomb Squad, from Tasty Minstrel Games and designed by Dan Keltner and David Short, is a cooperative card game that combines limited player communication, real-time gameplay, and hidden information to create an unbearably tense atmosphere.  Taking on the role of a team of bomb disposal and hostage rescue experts, players will work together to guide an intrepid little robot through buildings, trying to save everyone we can before the timer goes off and we all lose.

Jess:  I was going to say ‘Relationship Stress Tester’, but that works too.

Bomb Squad is a real-time game, and while any timer will do, TMG has provided a handy timer app for free, either on iOS or Android.  While the clock ticks down with agonizing inevitability, you and your teammates will desperately try to draw and place enough of the correct cards to move your robot through the modular-tile environment.  These modular tiles are double-sided and the arrangement is scenario driven.

Your robot has two missions – rescue hostages and disarm bombs.  To do this, players must place cards in the robot’s program area, and then activate the bot.  The commands can be rearranged before being executed, and then the bot carries them out, one card at a time, either moving a number of spaces, deactivating bombs, rescuing hostages, or opening doors.

Each hostage, bomb, and door is color-coded, and only the correct card of the correct color will let your Wall-E(xplosion) interact with that object.  Every command takes a certain amount of energy, and each incorrect or unusable command drains even more energy.  And when the bot’s batteries are dead, so are you.

Still, you may ask, where’s the problem?  Everyone can see the board, so everyone knows precisely where you need to send the robot and what commands you have to give him.  It’s just a matter of getting the right cards laid down, right?  And to recharge your bot’s batteries, you just discard cards, so there’s an easy way to cycle through your hand, right?  Even with the time limit, this should all be easy, right? RIGHT?

Andrew:  Because you can’t see your own cards.

Think about that for a second.

That’s right kids!  In Bomb Squad, you play with your hand facing away from you.  Therefore, it is your teammates who must tell you what cards you are holding, and only from their guidance can you make a guess as to which card you should be playing.  Again, that wouldn’t be a big deal, except that each turn, a player can only transmit very limited, very specific information.  You can tell a player which of their cards is Red, for example, or which of their cards are Bomb Disposal cards, but it is entirely on them to remember which is which, and that can be incredibly hard, given the tension created by the timer and the lack of direct information.

Jess:  The first time I saw this mechanic was in Hanabi, a really great, really tense card game.

Andrew:  And the only thing that kept that game sane was our ability to take our time and really plan things.

Jess:  But in Bomb Squad…

Players will take turns either discarding cards to recharge the bot or adding cards to the bot’s program row.  Eventually, someone will trigger the bot to activate, at which point they gather up all the cards that have been added to it (face down, incidentally), and rearrange them in whatever order makes the most sense (this is the only time players can talk freely at the table, but only about the programming of the robot).  If you can manage to disarm all the bombs, you will win!  If you don’t, you will probably pass out from the stress of trying.

With several scenarios to play through (and the option for making your own), variable specialist powers, different terrain and structure tiles, and several different robots to choose from (each of which has some unique advantage/disadvantage combination of traits, which is a thing I love), Bomb Squad actually has a fair bit of longevity.  If you’re so inclined, you’ll be able to play it a bunch of times, never hitting the same snags twice.

Andrew:  Of course, any snag can kill you.  But that’s the fun of it!

That, I think, is a significant detail.  In our first game of Bomb Squad, Jess and I failed spectacularly when we were simply unable to draw a single Red Disarm card.  Too used to trying to think ahead strategically, we were reticent to throw away cards that would be useful later in the game, and that hesitation did us in.  Three attempts later, we fully embraced the ‘screw it, discard a card’ strategy and we were able to cycle the deck fast enough to get the cards we needed.  Barely.

Jess:  Honestly, this one was too stressful for me.  Like you, I love the idea of it, but it’s just too darn good at doing what it sets out to do!

Andrew:  Yeah, but that’s what makes it awesome!  My only real gripe is a component one – the game is nicely made, but for some reason the control frame thingie doesn’t quite fit around the 2-tile configurations.  It works great for 4, though.  It’s unfortunate, but not a deal-breaker

Andrew:  Maybe later.  I have to have a little lie-down first.

Bomb Squad will be incredibly fun for a certain kind of gamer.  If the idea of guiding The Little Robot That Couldn’t (And Then Blew Up) through a maze of walls, bombs, and hapless victims, all while silently screaming at your teammates to JUST PLAY THE DAMN BLUE DISARM CARD NOOOOO!!! WHY WOULD YOU DISCARD IT!?!?, then Bomb Squad will offer you a truly good time.

(Thanks to Tasty Minstrel Game for sending us our review copy of Bomb Squad. Their generosity didn’t influence our review, but it absolutely did influence our cardiovascular health.)