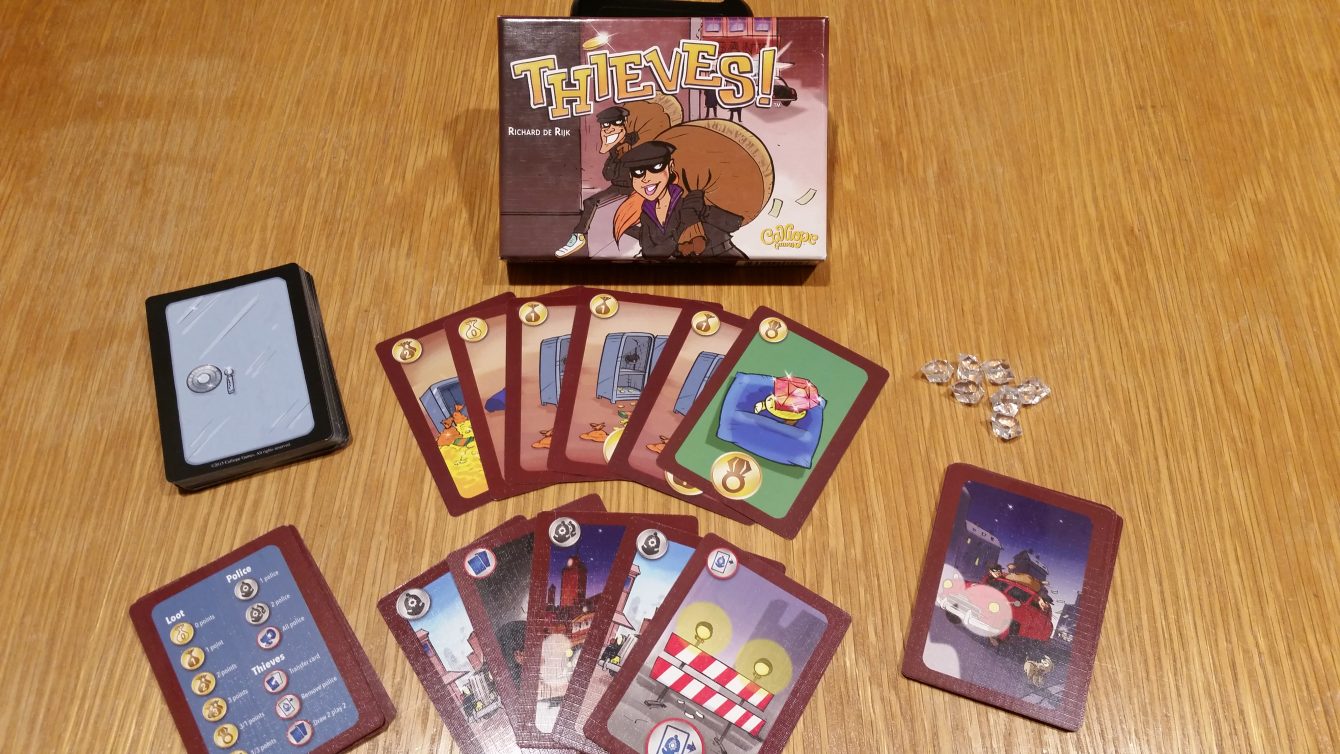 Thieves!, from Richard de Rijk and Calliope Games, is a light bluffing and card collecting game for the whole family, especially if your whole family is a bunch of loot-hoarding snitches who will sic the cops on you the second you have, like, two loot cards.

Thieves! is a very family-friendly game which, despite it’s tiny box size, plays 3-6 very well.  Having just pulled off a big heist, your goal is to be the thief with the biggest pile of treasure at the end of the game.  Of course, the cops are on your tail, and it’s every thief for themselves!  Each turn, players will draw up to their full hand size of 4 cards, and then play a card.  There are several different kinds of cards, each one playing slightly differently, but not nearly so many as to create confusion.

Also shuffled into the deck are 8 Getaway cards.  These act as the game’s timer – as soon as the last one is drawn, the game ends immediately and whichever thief has managed to secure the most valuable pile of loot at that moment is the winner!

Andrew:  I think that the Getaway cards is one of the neatest parts of Thieves!  You never know precisely when the game will end, so you are constantly hedging your bets on just how long you can go before the next police raid empties your hand.  It’s a surprisingly engaging mechanic for such a straightforward game.

Jess:  Yeah, there is just enough going on in Thieves! to keep gamers interested even though it’s more of a family game.  There are elements of heavier games (bluffing, hidden information, an in-game timing mechanism), but they have all been streamlined down into a very friendly, approachable package.  Most games are over in 10-15 minutes, even at full player count, and that’s awesome.

Andrew:  And for folks who want a longer experience, the very simple ‘extended play’ rules are included.  The winner of a round gets a point (represented by a nice little gem), and then we play again.  As soon as someone has 2 gems, they are the winner!

Thieves! is perfect for warm-up/cool-down gaming, as well as lunchtime gaming (plays quick, needs little tablespace, you can have a conversation while you play).  Of course, the fun of the game is watching your opponents squirm when the cops show up and take their stuff, but somehow the light tone and quick gameplay makes the take-that elements feel harmless, making it a great addition to just about any collection.  With charming art, easy rules, and a generous player count, Thieves! is an excellent little game that we gladly recommend!

(Thanks to Calliope Games for sneaking us our copy of Thieves! for review.  Don’t call the cops; their generosity didn’t influence our opinions.)