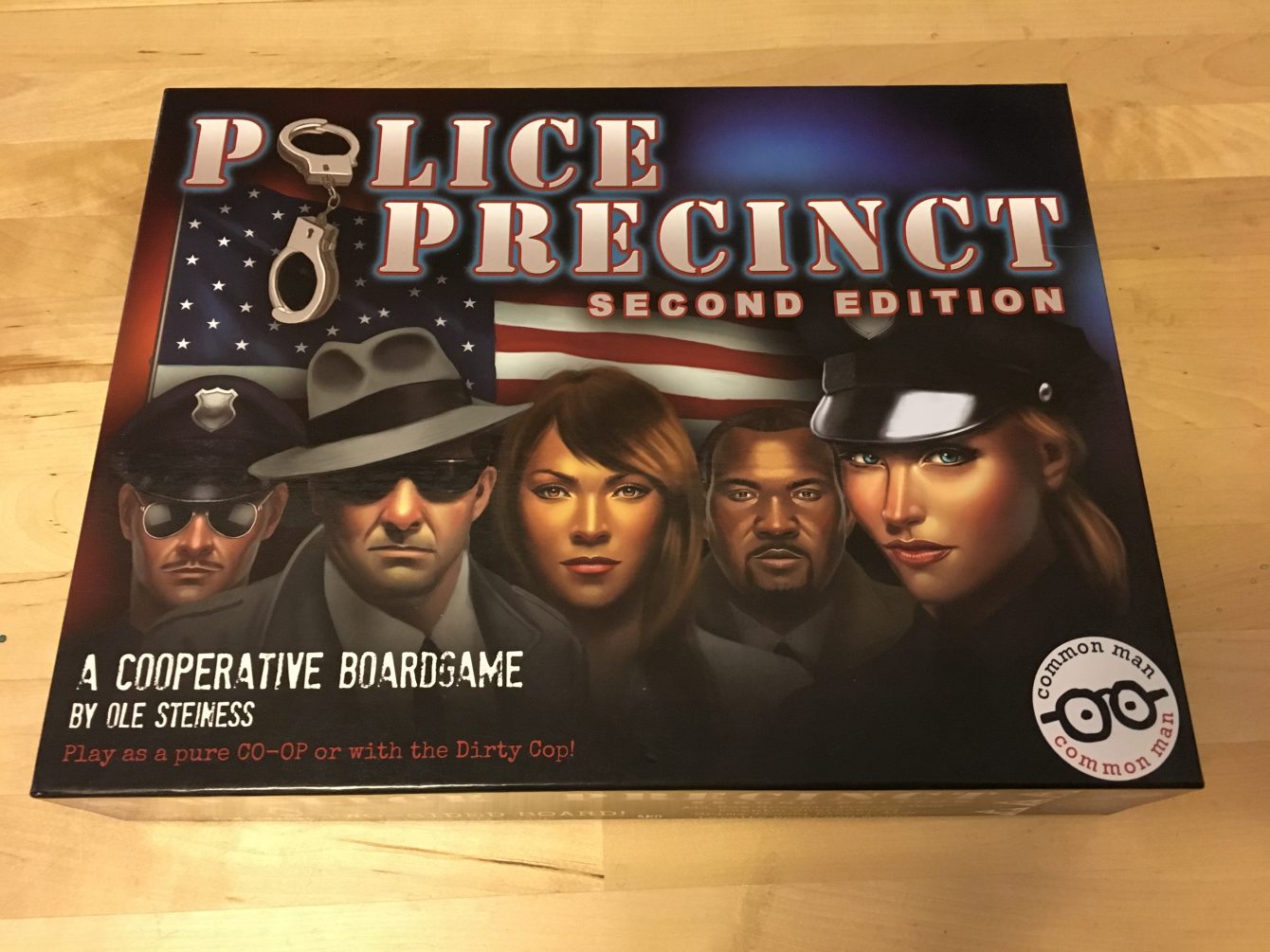 Police Precinct – from designer Ole Steiness (who recently created the awesome Champions of Midgard) and publisher Common Man Games – is kind of a miraculous combination of elements that probably shouldn’t work all that well together, but somehow totally do. It feels sort of like Pandemic or Flash Point, but with a theme that evokes something akin to Law & Order and CSI. Plus there might be a dirty cop mucking things up for everybody. That’s always a possibility.

The gist is that you and the rest of the cops in your department have been put on a special task force in order to solve a high-profile murder case. The problem is that the governor isn’t too keen on the idea, so you have a very small window of opportunity to pull it off before he axes the whole thing and the bad guy gets away. So you and up to five friends (presumably) have to work together in order to get the job done in time. Oh, and you also still have to deal with all sorts of other crimes and law enforcement problems while you do it.

Andrew: Wait, we didn’t get that fancy explanation when we started playing.

Rob: I know. That’s because I was in a hurry to get things started, and I still needed to brush up on the particulars of the rules. I also just went and re-read the intro from the instructions before I started writing this.

Jess: Whoa there, break the fourth wall much?

Rob: Anyway I covered the basics: we have to find and arrest a murderer, and we don’t have a lot of time to do it.

Andrew: I still think the 21 day limit seems like a really arbitrary number.

Diana: Then feel free to call up the governor and complain!

Everyone gets to pick an officer, each with a different combination of special abilities and stats for things like arresting punks or dealing with emergencies, and then it’s time to start putting the pieces together. Which, of course, is significantly easier said than done. Especially when playing with more people, and therefore having many more fires to put out, metaphorically speaking.

There are several locations where you and your team can collect evidence – from the murder weapon to witness statements to the cause of death – and you’ll need to scour them all in order to find everything you need to put the murderer behind bars. But while you’re running around trying to do all of that, you still have to deal with the day-to-day crime that big cities tend to foster. So while you might really need to stop by the morgue to conduct an investigation, you might also feel it necessary to go put a stop to an attempted jailbreak.

Jess: Things got out of hand so quickly during our game. It seemed like we had a handle on things, then we suddenly had a murder on the verge of escaping, the crime rate skyrocketed, and there were street punks all over the place.

Diana: Yeah, that was pretty intense.

Rob: You were the reason things got so bad in the first place!

Andrew: Not really, no.

Yes, there’s an optional traitor mechanic you can use when playing Police Precinct. The problem is that it doesn’t really feel like an improvement. If anything it seems rather superfluous since things can go bad so quickly, which doesn’t give the dirty cop much agency. And while it’s nice that the traitor can keep playing once they’ve been revealed (or have revealed themselves), it kind of stinks that the other players can’t do anything to counteract the traitor’s actions in any way – all they can do is try to mitigate or compensate for the damage.

Andrew: “Superfluous” seems like an awfully nice way to put it.

Rob: Well I mean I don’t dislike the idea of having a traitor, but the implementation doesn’t really work all that well for me. Especially when you consider other games with traitor mechanics that are out there.

Andrew: I suppose. And I definitely agree with how the traitor doesn’t really have any agency. They can mostly just sit back and watch stuff happen. And once they’re revealed they can actually muck things up a whole lot worse.

Diana: Even though I totally stomped you all, I feel the same way. I basically just revealed myself so that we could see what happens – I never felt like I actually had to. And once I was out in the open it was way too easy to royally screw things up for you.

Andrew: I had my suspicions about you.

Diana: Yeah but you never acted on them. I’m not even sure you could.

Rob: That’s right. In order simply accuse someone, you need to spend three donuts. I think the only person who ever had more than one at a time was Diana. The cost is kind of ridiculous.

Jess: I was having plenty of fun with it before Diana went rogue. Then it just started to feel unfair.

Andrew: I think a lot of that probably had to do with how we all still needed to worry about events and stuff, but she could just sit back and watch things burn. Which, now that I’m thinking about it, doesn’t really seem to fit the theme. If a corrupt cop was found out they wouldn’t be able to stick around pulling the strings. At least nowhere near that easily.

Traitor mechanic aside, the rest of Police Precinct is quite good. When you’re not dealing with the absurdly over-powered traitor you’ll be able to fully enjoy panicking every time someone has to turn over a new event card or holding your breath whenever anyone rolls the dice. And there are a lot of little details that it manages to capture really, really well.

You can decide to use either a marked or an unmarked cruiser, which will give you different advantages and disadvantages. You can use beat cops to assist you – provided they’re in the same neighborhood. You can chase down stolen cars, investigate a gas leak, stop a robbery, interview potential witnesses to a murderer, and, if you’re lucky, gather enough evidence to put the scumbag away for a really long time.

Andrew: I really enjoyed everything up until the traitor was revealed. The theme was cool, and it hit that “Oh my god everything is on fire what do I do” button that games like Pandemic do so well. Although I wasn’t a fan of the donut stereotype.

Jess: Is it really that big a deal though?

Andrew: No, I guess not. And I did try to see if I could order it online right after we stopped playing, so I guess that speaks for itself.

Rob: I’m in the same place as you. I really, really like Police Precinct, though I’m not a fan of the traitor mechanic. Thank goodness it’s just a variant that we can simply avoid using from now on. Because the game itself is really a lot of fun – in that “everything’s gone horribly wrong” sort of way.

Rob: That’s definitely true. It was a lot easier with fewer players, but there are other rules variants we could always try to make things a little tougher. And it plays really well solo, too!

Andrew: Of course it does.