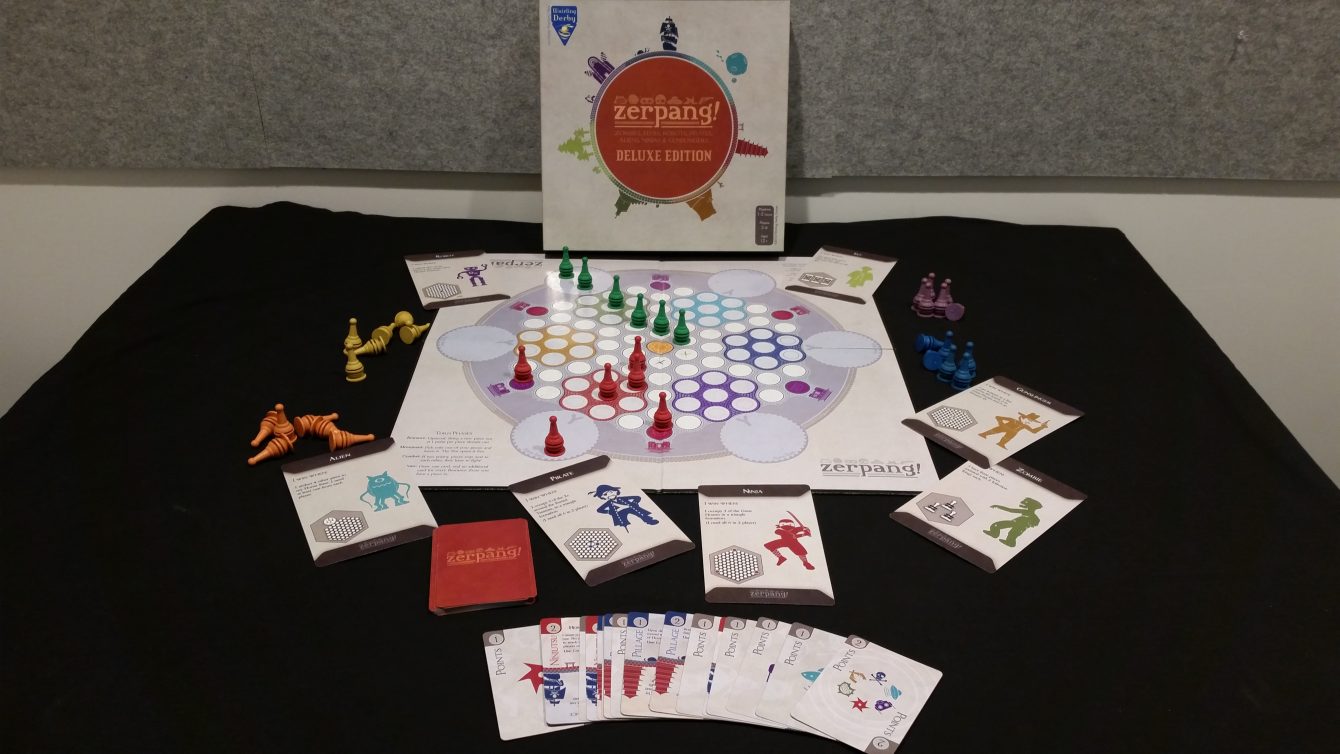 Zerpang!, designed by Whirling Derby Games and published by our pals at The Gamecrafter (The Captain Is Dead), is an awesome game of swashbuckling pirates, crashing through the waves of an uncharted sea as they search for a place to bury their ill-gotten treasures!

Rob:  What?  No, Zerpang! is a game about a bunch of robots, seeking to proliferate their hive-consciousness to the global network by uploading themselves to the cloud.

Diana:  I have no idea what you guys are talking about.  Zerpang! is a game about stealthy ninjas, conquering the great dojos throughout the land via stealth, guile, and martial prowess…Jess, why are your pieces eating my ninjas?

**Update – the Zerpang! Kicktstarter is up right now!  Check it out here!**

Andrew:  Usually for sale on The Gamecrafter, a new, extra-awesome-deluxe version of Zerpang! is up on Kickstarter right now.  It features faction-specific miniatures, updated rules, and at least one new faction as a stretch goal (we won’t be spoiling them – we hate temporal paradoxes!)

Each faction follows the same basic turn structure (conveniently printed on the game board), which is an optional unit deployment, a single unit movement, combat (if movement brings 2 opposing pieces adjacent to each other, and then a card draw.  Some cards have Pirate or Ninja abilities (which are often useful to more than just the Ninjas or the Pirates), but most simply have Power values, which can add to movement or influence combat.

However, that’s where generalities about Zerpang! end.  Each faction has around 4-5 special rules that affect how it interacts with the game, as well as each group having its own unique victory condition.  Each group has different rules regarding card use; some factions can make use of the Ninja or Pirate cards with restrictions, and some can’t interact with the printed special effects of cards at all, using them instead in other, powerful ways.

The different victory conditions are one of the coolest aspects of Zerpang!  Several factions care about controlling some combination of spaces on the board, but factions like the Zombies have different goals altogether.  That lack of mutual goals makes Zerpang! a really interesting game – you not only need to work on doing what you need to win, but you also have to keep the other players’ goals in mind.

Jess:  What’s neat about Zerpang! is that each player is essentially playing a different game.  The Gunslingers look at their hand of cards and see poker combos that let them make huge plays, whereas the aliens are all about abducting other players’ pieces.  But unlike many games that have unique player rules, none of this is even vaguely solitaire; Zerpang! is all about head-to-head confrontation.

Diana:  Aside from the Elves.

Rob:  Yeah, the Elves started as a gag faction, intended for people who were only watching the game.  The snooty bastards win by outliving everyone else.

Andrew:  But the new rules do make them playable, and even pretty powerful!  Though they do still win by outliving everyone, it just doesn’t take 3 hours anymore.

At the heart of whether or not you will enjoy Zerpang! is whether you and your fellow gamers enjoy direct contention.  It’s a bit of a meat-grinder; units that end their turn adjacent to another faction engage in combat, usually sending one (or both) of the combatants back to base to be summoned next turn.  The nice thing about all this head-to-head brutality is that the combat mechanisms are quite simple and quick to resolve, as well as the fact that, the moment you meet your victory condition, the game immediate ends, even if that action would have resulted in combat.

Andrew:  Normally we shy away from games with a ‘take that’ edge, but I really like Zerpang!  What makes it work for me is how everyone is working towards different goals and using different rules, but somehow we are all still playing in the same game-space.  And the way that the rules for each faction feel thematically appropriate is probably my favorite part – Aliens abduct, Gunslingers play poker, Pirates raid treasure, all in the same game.  I love that!

Jess:  Yeah, and despite the kitchen sink feel of the theme, it never felt disjointed or arbitrary.  It’s silly as all heck, but that’s the charm.  I admit, it was a little too ‘in your face’ for me.

Andrew:  But your zombies ate everyone!

Jess:  Alright, it was a little too ‘your face is in my face’ for me.  But the concept is really cool.

Andrew:  That doesn’t make any sense.  Aside from the cool part; I’ll agree with that.

Zerpang! will be up on Kickstarter shortly, adding faction minis and other awesome stretch goals.  If this silly, well-balanced mashup of fantasy factions sounds like your mug of awesome, we strongly suggest you check out the Kickstarter page, which we will link to as soon as it goes live!

(Thanks to the Gamecrafter for setting us up with our copy of Zerpang!  It is a rule of the Reviewer faction that our opinions cannot be influenced by generosity, which we adhere to rigorously.)