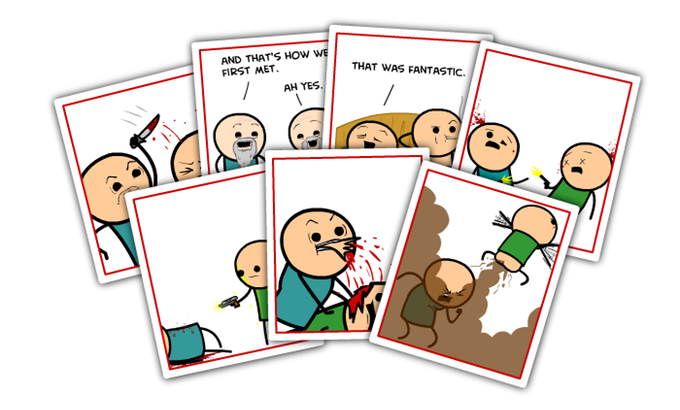 Lately it feels like Kickstarter has looked at our collective wallets and said “Hey, it looks like you have too much money in there. Here, let me lighten the load for you buddy.” Alongside a slew of other awesome campaigns, Cyanide And Happiness is now kickstarting their card game: Joking Hazard. The game is based off of their popular Random Comic Generator, which takes hundreds of single panels from comics and strung them together into semi-coherent, but often funny strips.

Joking Hazard works the same way. Everyone gets 7 cards. An all-powerful judge is chosen to begin play. They will flip over two cards that will form the beginning of a strip. All of the other players must play a card facedown to be the 3rd in the strip. The judge will then read all of the cards and select the one they like the most.

The game is similar to other titles like Cards Against Humanity, but it adds a few rules to keep it feeling unique. The black bordered cards are played normally, while red bordered cards are end cards. This means they portray something that inherently ends the panel and so can’t be played as part of the judges draw. If the judge draws a red bordered card, all players can trade in their current cards for new ones and the current round counts for double points!

Jess: The creators encourage players to come up with new ways to play since the game is pretty open to begin with. Perhaps you could play it as some sort of strange story telling game where the last player who is able to play a card that makes some sort of thematic sense loses a point? I’m sure there are a billion other ways you could play with the cards. It looks like a fun idea, but I worry that it will lose it’s appeal after you’ve played it several times. Games like these thrive on newness and so often i don’t break them out unless we have someone who has never played before. That said games like Joking Hazard make for great party games.

For $25 you can get one deck of Joking Hazard or by upping your pledge to $35 to add “Blast From The Past”, a fifty card booster pack. The game is due to ship in November 2016. Check out the Joking Hazard Kickstarter to pledge today!