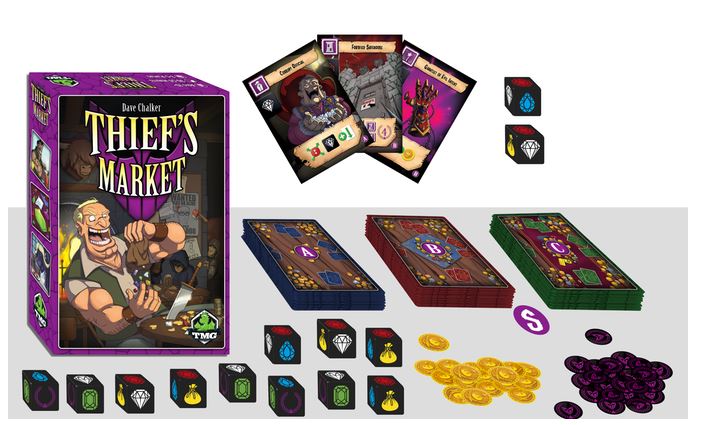 Thief’s Market, a just-heavier-than-filler-level dice-drafting game from Tasty Minstrel and Dave Chalker (who also designed the excellently-thieftastic Heat) is in the final stretch of a *very* successful Kickstarter campaign right now!

In it, 3-6 players take on the roles of master thieves having just completed a big heist and competing for the title of King of Theves.  However, dividing up loot fairly has never really been a criminal strong suit, so, like sharks caught mid-frenzy, you and your fellow criminals will take turns stealing dice from each other and working to earn themselves the most notoriety, so that their name will live on in infamy!

Andrew:  You know, the easiest thing to compare Thief’s Market to is a Yankee Swap.

Rob:  A who with the what now?

Andrew:  It’s a Christmas thing.  Everyone shows up with a wrapped gift, and then participants either open a gift for themselves or they steal a gift another participant has opened already.  And the stealing and unwrapping continues until everyone has something, but probably not exactly what they wanted.

Rob:  That’s how your family does the holidays?  How do they split up dinner?  Trial by combat?

Rob:  …That explains so much about you, actually.

In Thief’s Market, each round begins with the loot dice being rolled.  Then, in turn order, players will either take as many dice from the center as they want or all the dice another player has taken (rolling one back into the center as they do so).  Once everyone has gotten something (which will inevitably be less than they want, because it’s tough being a thief surrounded by, you know, thieves), the titular market comes into play.

Thieves can spend their ill-gotten gains on cards that will either give them valuable Infamy points, allow them to manipulate their dice, or generally giving them greater control over what they can do in future turns.  The game lasts until the third tier market, stocked with the most expensive and valuable cards, cannot be refilled.  Points are tallied and the most notorious thief is declared!

Andrew:  Despite the dice, Thief’s Market isn’t really a push-your-luck game.  It’s actually a bit heavier than that.  More of a how-much-can-I-get-away-with game.  You’re really gambling as much on what the other players will do as you are on the dice.

While gameplay is incredibly easy to grasp, the fact is that each turn you are making tough choices about which loot you grab.  It’s a really nicely balanced mechanism – do I take the most valuable stuff?  No, that will make it likely it will be taken from me.  But if I take less, then I will likely get stuck with less.  And if I steal from someone else, I will have to give up one of the dice in the exchange.  And all that is before you take into account the cards which let you manipulate the dice.  This constant cost/benefit analysis generates some really interesting gameplay moments, all while being fundamentally uncomplicated.

As with Tasty Minstrel Games’ other titles, it looks like the production quality will be top notch.  Our prototype featured dice on par with Dungeon Roll (another awesome TMG game) and the cards have great art (in the world and style of another TMG favorite, Harbour).  Of course, we expect the finished product will look even better!

Andrew:  Thief’s Market occupies a neat space in the collection.  It’s a small box game (with an incredibly reasonable price-point), but it feels just a little meatier than ‘filler’ status.  It can pretty much go anywhere you can roll some dice and lay out the cards.  My only real complaint about it is that, as part of a gamer couple, I prefer my games to have a 2-player option.  Still, Thief’s Market is a no-brainer backing for me.

If Thief’s Market sounds like a good time to you, then head on over to their Kickstarter now!

(Thanks to Tasty Minstrel Games for sending us our prototype of Thief’s Market for preview.  They couldn’t steal our opinions if they tried!)