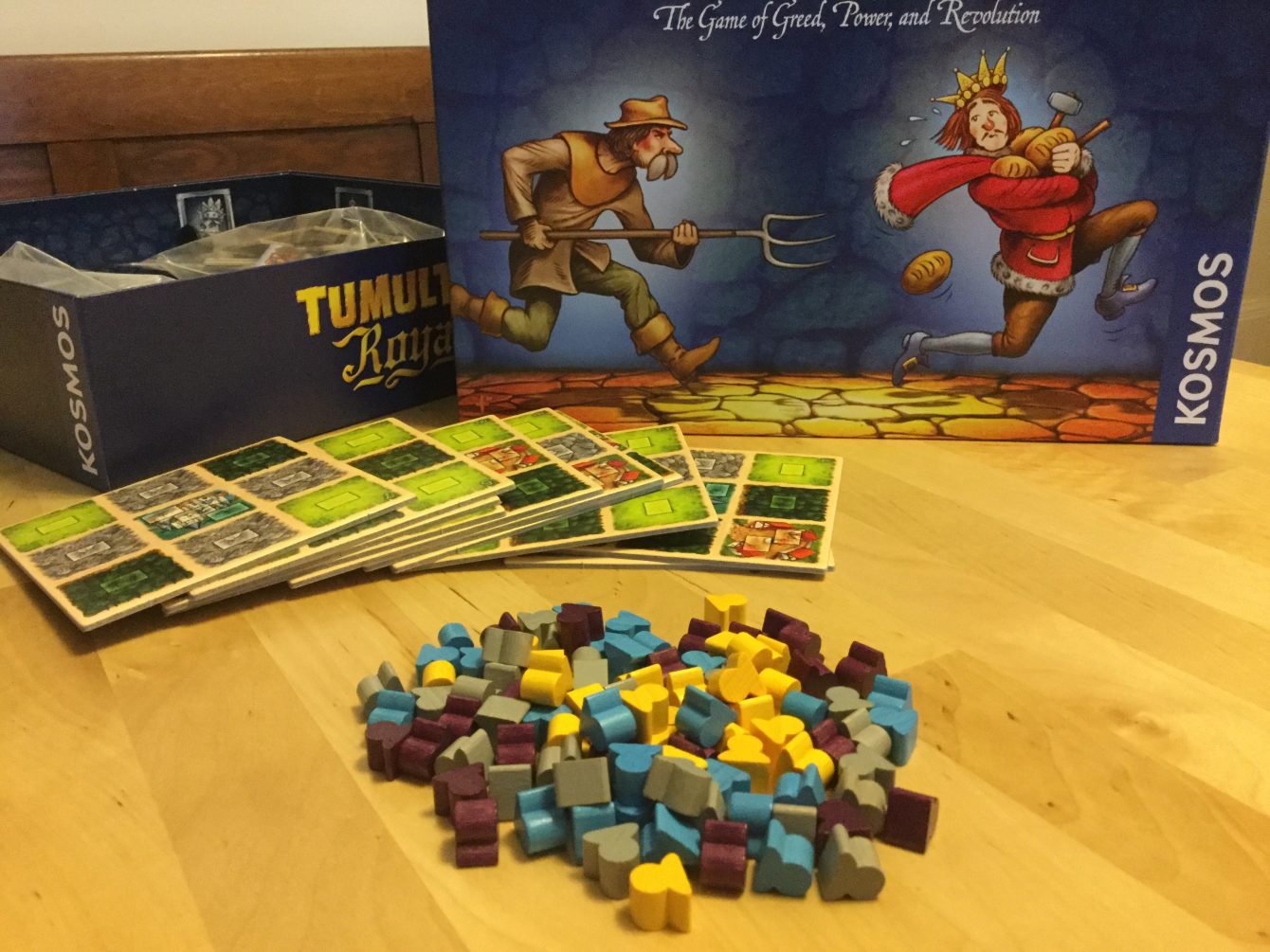 Diana: I am the most glorious ruler in all the land! You must gaze upon my face in all its marble glory, feel the power of my command.

Andrew: Um, yeah. So you are the Queen for this round. Her royal highness must now relinquish five supporters.

Diana: There goes some of my awesomeness. Flee former citizens! For you are not worthy of gazing upon my statues!

Rob: I think we need to switch Diana to decaf tea for the next few days…

Diana: Hush you lowly Duke! 20 seconds on the clock, time to grab our supplies!

Thus starts another round of Tumult Royale a quick, fun, and light game from Thames & Kosmos (Kahuna) which is one part area control, one part strategy, and a dash of a Galaxy Trucker-style real-time supply grab for added interest. The goal of the game is for 2-4 players to build as many statues in your honor as you can before the game ends and become the most glorious royal in all the land. However you must keep your people happy and well supplied at the same time, so if you are too greedy you do run the risk of causing a revolt (or tumult) among your citizens, resulting in a loss of the supplies you just grabbed.

Rob: Hey! Not my fault, I needed that bread to build statues in my honor.

Andrew: Not that much bread you greedy jerk.

Rob: Says the guy with all the marble!

Jessica: To be fair, both of you are greedy and the citizens will be coming after Andrew next.

Tumult Royale is played in a series of rounds that moves swiftly from supply grab, to resolving possible tumults due to player greediness, right into statue building and then reassigning royalty based on who was the most successful at gaining supporters that round.

The supply grab is played out n real-time, with a 20-second time limit.  Before the grab, though, the first player will spin the peasant spinner, determining how many of each good needs to be left on the table lest the peasants revolt and reclaim the goods you have stolen, er, taxed from them.

Once any potential tumults are resolved, players will spend their supplies to build statues as well as rally supporters for themselves.

Rob: I am going to way overpay to build in this field.

Andrew: Talk about an overbuild, you only need one bread and one marble! Are you really paying three bread and three marble?

The best part of Tumult Royale is the checks and balances that are built into the game; it keeps the rounds fair and does a lot to even out the playing field and keep any single player from really running away with the game. If you have a ton of supplies, you can build a lot of statues but this runs the risk of ending up with fewer supporters at the end of the round.

Conversely you can overpay to build a statue to gain supporters but this may lead to fewer statues built for the round. Another great balance is built into the honor of being crowned king (or queen). As the top royal you will lose supporters (nobody likes the person in charge), making it more of a challenge to maintain your top-dog status from round to round.

Rob: Sigh, so few statues in my honor.

Andrew: Well, if you didn’t keep taking all that bread maybe you wouldn’t have caused so many tumults resulting in a lack of supplies that lead to such a pitiful representation of your likeness!

Rob: How!? There are still more rounds!

Diana: Because she has so many more statues in her honor than you do. Mercy kill.

Jess:  Never fear, my subjects!  I will be a merciful queen!

Tumult Royale is a great game to introduce causal gamers to since it is so accessible and quick to play. It may not be a game that hardcore game enthusiasts would play again and again, but it was more than entertaining for our group of players and an excellent board game night game!

(Thanks to Thames & Kosmos for providing us a copy of Tumult Royale for review.  Our opinions weren’t swayed by their generosity.)