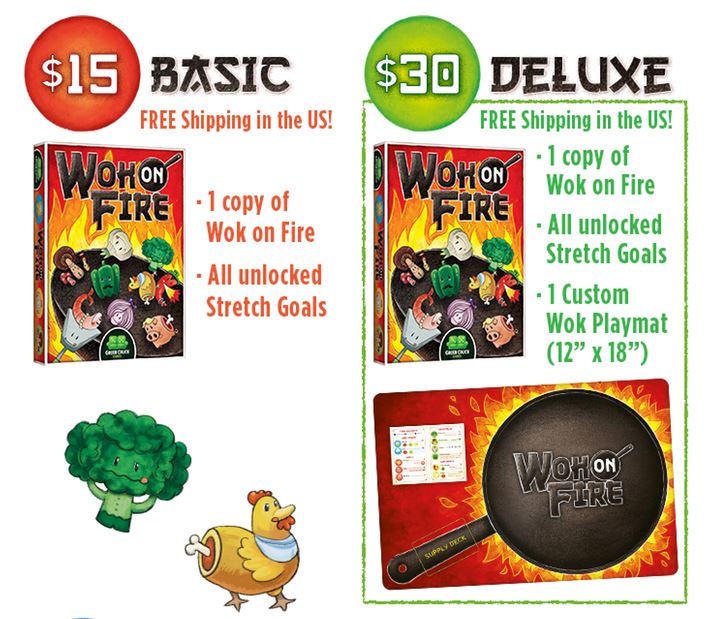 Wok On Fire! is a light, quick dexterity and set collection game from Green Couch Games (Best Treehouse Ever, Fidelitas) up on Kickstarter right now!  In it, 2-4 players will take turns tossing ingredients around in the communal wok and trying to collect sets of ingredients to score the most points!

(Kickstarter prototype stuff:  Green Couch Games was good enough to send us our copy for preview, but of course it’s just a prototype and things might change.  The cards are already great, though!)

Andrew:  The first thing you will likely notice about Wok on Fire! is the absolutely awesome art.  There is something so adorable about the way Adam McIver has illustrated all the ingredients; you will giggle like mad as you assemble piles of grinning produce and inexplicably good-natured proteins.

Jess:  Yeah, why is everything so unperturbed about being stir-fired?  Little ingredients, don’t you see?! The almighty Spatula is coming for you!  RUN!

Setup is simplicity itself and once the cards are shuffled out face-down and everyone has a spatula card, you are ready to go.  Each player will make an attempt at flipping over some ingredient cards using their spatula card, and then will have the opportunity to collect two ingredient cards.  Finally, to end their turn, players will toss a couple of ingredient cards back into the wok.  This continues until the ingredient deck runs out (players take a final turn), and then points are tallied.

Andrew:  The best part of wok cooking is how fast and delicious it is, and Wok of Fire! is definitely that – a light, quick game that makes for fantastic filler (no pun intended).  However, it has two elements that make it just a touch more challenging than it may first appear.

The first is the ‘stir-fry’ mechanism itself.  Depending on your table surface, it is possible you may have a ghost pepper of a time getting your spatula card under the other ingredients to flip them.  Of course, that’s the dexterity challenge of the game, so embrace the silliness of it when you mean to flip that Shrimp card you want and you end up launching it across the table instead.

The second little bit of trickiness is the end-game scoring.  Each ingredient is scored slightly different, and some of them can be combined for huge point swings.  It’s a really fun bit of complexity (just a tiny bit!) that adds a touch of strategy that makes Wok on Fire! more than just a simple card flipping game.

Wok on Fire! is a really nice little filler game.  Portable, affordable, and really pretty to boot, Wok on Fire! is the kind of game that could easily make an appearance at any board game gathering (while waiting for takeout, preferably).  It is uncomplicated and fun and never overstays its welcome.

We had a great time with the Wok on Fire! prototype that was sent to us, and we’ll more than happily support their Kickstarter.

If you’d like to try your hand at woking, we strongly suggest flipping over to the Wok on Fire! Kickstarter page and tossing in your support!