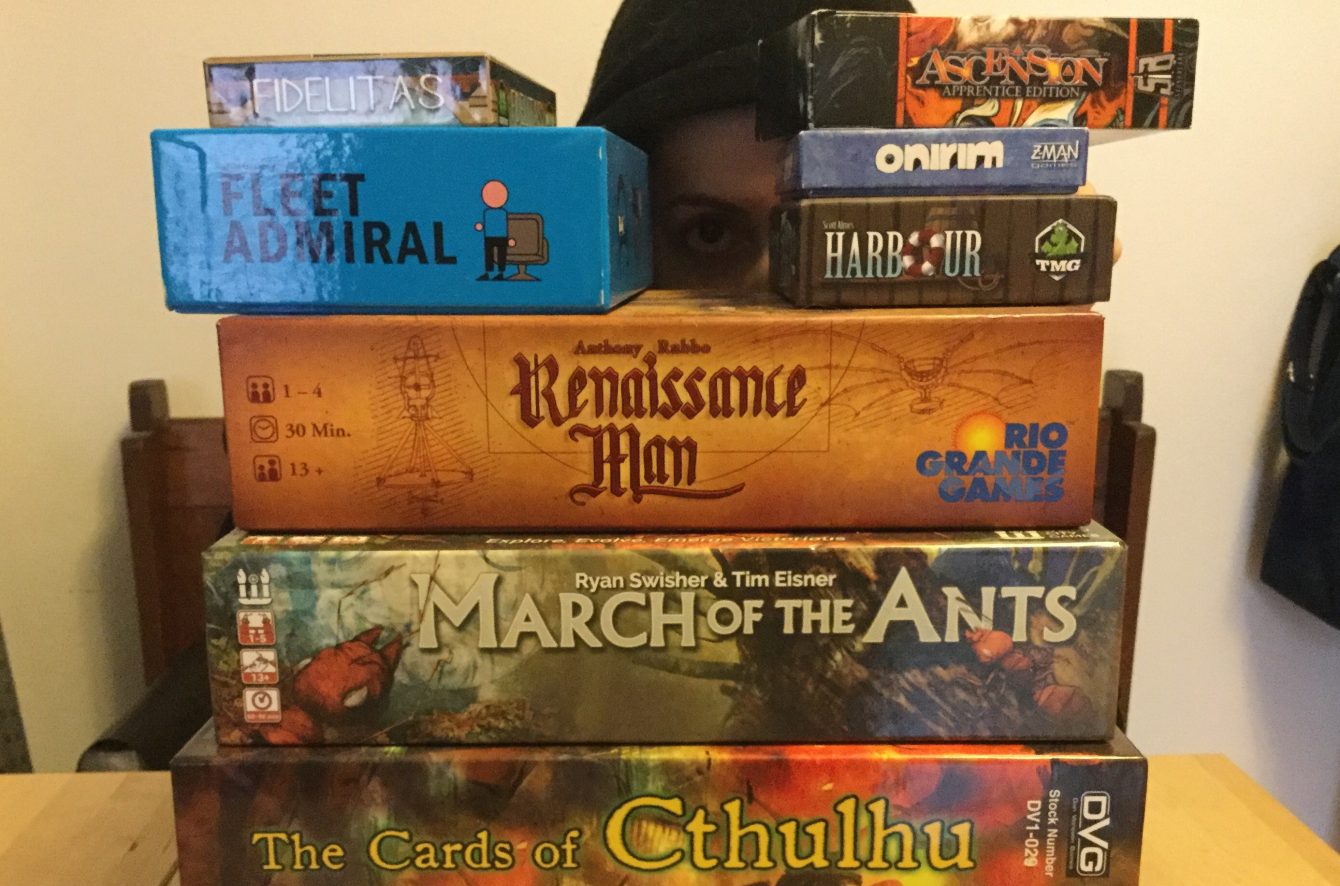 It’s not a big secret that I’m a casual board gamer surrounded by (and married to) serious board gamers and obsessive collectors. While I do enjoy the social aspect of gaming, I’m rarely inclined to pick one up on my own and most of the games I’ve learned have been learned reluctantly.

Why reluctantly, you ask? Because I suffer from what I like to call “Casual Gamer’s Anxiety” – with symptoms including the fear of forgetting obscure rules and a loss of focus when hearing a game being described.  Casual Gamer’s Anxiety is different from Generalized Disinterest In Gaming, though the symptoms can be extremely similar; exposure to low-level gateway or filler games can be used to differentiate between these conditions.

CGA is surprisingly common, though it can remain undiagnosed for years; it is often discovered when family or friends begin to develop their own board gaming addiction.  Perhaps you or someone you would love to game with suffers from CGA.  What follows is my guide to diagnosing CGA and tips on gaming alongside people who suffer this disorder – because for a CGA sufferer, the best assistance often comes from those who already want to game with them.

GLAZED EXPRESSION – This symptom is often the first sign of an impending CGA episode. It usually occurs when a new game is being described, when said game is not present, and there are no visual cues handy to partner with all those words. A glazed expression can quickly escalate to daydreaming or mentality making a grocery shopping list if not attended to immediately.

Do not attempt to overly describe or teach a new game to a casual gamer with a glazed expression if you’re not sitting down to play the game right then. A simple one sentence description will usually be enough to grab their interest without putting them off. “A deck builder featuring space cats” Sounds awesome. 20 minutes on the minutiae of the various ways that calicos can be used to build combinations with meteorites and star-treats to offset an early-game uneven mana curve and set up for future planet points sounds like a lobotomy to the average CGA sufferer, at least before they are already elbows-deep in the game. Save this for the hardcore gamer who revels in the details.

STARING BLANKLY AT SMARTPHONE WHILE THE GAME IS BEING SET UP – While at first this may be a startling symptom to those who do not suffer from CGA, it’s actually nothing to worry about. A hardcore gamer with be fully engaged from the time the box is open. They’ll want to talk about the quality of meeples and dice; they’ll wax poetic about the size of the box and how the game fits inside (ROB); they’ll lovingly gaze at the board and begin to strategize before the game even starts.

A gamer with CGA won’t start to connect with the game at first. They’ll want the full picture laid out before the learning can begin. Let them stay in their comfort zone and relax. If you give them time and space they may feel safe to disengage from their phone and build you a beautiful tower out of dice and meeples as you set everything up.

I DONT GET IT – This symptom is either verbal or can be seen in body language or facial expressions. This happens when the rules of a new game are either too complicated or being explained poorly.

A) Explain the win conditions first – this will put everything else into context.
B) Keep it simple. Less is more – there may be details of the game that will never come up in the course of an average play through, or which really won’t impact gameplay until they arise. Don’t belabor those details until they are relevant.
C) Learn by doing – Many CGA sufferers learn from the act of doing. Words without visual context and practical application are just words.

COPYING MOVES OF OTHER PLAYERS – Don’t be concerned about this symptom. They’re not cheating – they may just need a few rounds to learn the rules of the game and form their own strategies.

Allow them to go last so that they can see a few other possible plays first. Don’t pressure them into making fresh decisions in the first few rounds and talk your way through your moves a bit to provide a fuller understanding to decisions that you’re making. You’ll be surprised at how fast they’ll begin to make unique and intelligent moves of their own.

BREAKING THE RULES – This is never done on purpose, but it can be a byproduct of either learning the game by doing (the rule may not have been covered) or an offshoot of the I DONT GET IT symptom (i.e. they tuned out when too many rules were being described).

Don’t be afraid of politely reminding them of the rule they might have missed. The average CGA sufferer will have full awareness that their disorder makes them susceptible to forgetting rules. No harm will come of reminding about the rules of the game.

If you follow these tips, you too will be able to better integrate a sufferer of CGA into your gaming group. These teaching methods have also been shown to enhance the new game enjoyment for gamers of all levels of skill and enthusiasm, and I encourage everyone to give them a try.