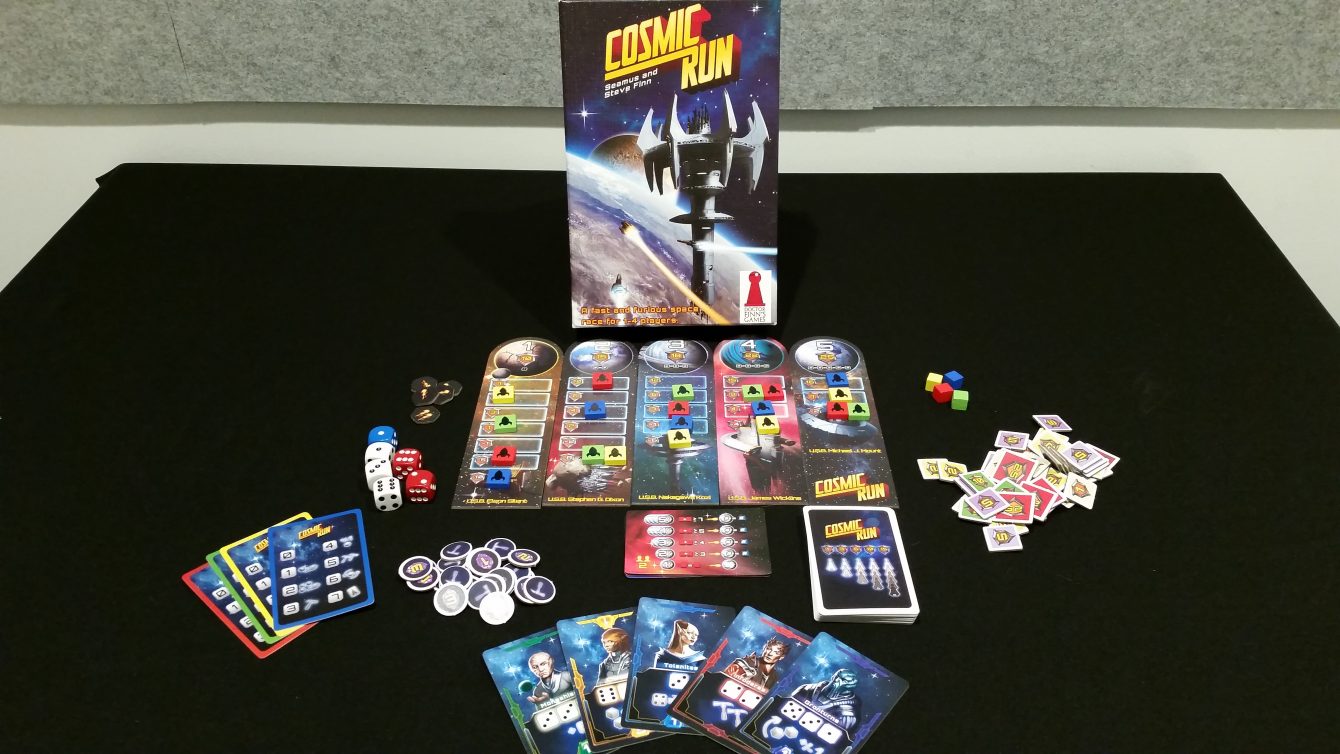 It is no secret to anyone who reads my reviews that I am a sucker for a good dice game.  I’m not sure what it is, whether it’s the fact that I sort of worship chaos or the fact that nicely made custom dice make my heart flutter, but there is something about a good dice chucker that makes me happy.  That said, it takes clever game design to extract real fun from a pile of dice, and even more to make the gameplay feel at all strategic.

With Cosmic Run, designer, publisher, and recently crowned King of Fillers* Doctor Finn has succeeded in turning a handful of humble 6-siders and some progress tracks into a truly fun, light-weight, dice driven strategy game.  Perfectly suited for 2-4 players, Cosmic Run is definitely a ‘filler’ game, but that isn’t to say it’s fluff.

*This statement made by Richard Ham of Rhado Runs Through, while not officially endorsed by the Supreme Space Warlock Council of Board Games, seems pretty spot-on with us, and, honestly, what do those Space Warlocks know anyway?…Please no one tell them I said that.

Cosmic Run is one part push your luck, one part dice placement, and one part race.  All players are trying to earn the most victory points, which they will gain by finding lost planets, mining up crystals, and bringing together alliances of alien races.

To start each turn, players will roll the dice.  The red dice get added together to determine whether a meteor has struck one of the planets, and the blue die will determine which planet is targeted.  This scale changes with player count so as to keep the game tight and fast-paced no matter how many are playing.  Once that bit of business is done, the active player will assign to the various planet tracks, alien allies, and technology track as many of her dice as she wants (minimum of one per roll).  After assigning, the player can re-roll as many times as she cares to, always assigning a minimum of one die.

Players will derive the majority of their points from climbing the 5 planet tracks.  As mentioned above, each one requires a different combination of dice to advance, and the first few tiers of the tracks represent lost points.  The point values get greater and greater the closer to the destination planet your ship is.  When all five planets are scored, or when the Alien deck runs out of cards, the game is over and the points are tallied.

Andrew:  There are two ways that planet scoring happens in Cosmic Run.  The first is when a player’s ship reaches the planet at the end of a track.  That player gets the maximum number of points for the track, and every other player gains (or loses) the points for their ship’s position.

Jess:  The other way planets score works exactly the same way, with everyone getting points for their position on the track.  The only difference is that it is triggered when a planet gets hit by meteors 3 times.  The first two times it happens, no big deal.  But as soon as the third meteor hits, that planet is toast.  Say goodbye to all those points above you!

Andrew:  Yeah, but at least you still get points for the progress you did make.

Jess:  True.  But I love how the meteor mechanic keeps everyone pushing up all the tracks, rather than just focusing on the ones that give the biggest points.  Nothing sucks more than sitting below the negative point marker on a planet, only to have it blown up before you can even begin exploring.  Doesn’t happen often, but it’s good motivation to go baby go!

She’s right – Cosmic Run isn’t real-time, but it can feel quite like a race, as the progress of other players and the fall of those meteors keeps the pressure up.  And we love how the game accelerates towards the end, as things tighten up until the game absolutely bursts with victory points.

Along the way, your Alien allies will let you fiddle with the values on the dice, making each turn more and more strategic, while still being driven by a solid core of polyhedral chaos.

Cosmic Run is a simple game, but like so many of Doctor Finn’s creations, it is informed by some really clever design sensibilities.  Turns are quick, decisions are limited, but we never felt like there wasn’t anything interesting to be done with our actions.  We really enjoy Cosmic Run every time it hits the table, and it absolutely is among the best filler games I’ve played.

Andrew:  I’ve got tons of warm fuzzies about this game, but should we mention the thing?

There is one rule which bugs us; though, full disclosure, it has never once come up.  If, when a planet scores, you owe VP (because you are below the negative point threshold) and you don’t have enough to pay, you lose your next turn.  And if it happens again (even before your lost turn), you lose the subsequent turn.

Andrew:  ‘Lose a turn’ mechanics…well, they suck.  And in this case, you are losing a turn because you have no VP…which, to my way of thinking, means you are already in a weak enough position that punishing you further is a bit like fining people for being too poor.  It just feels crappy, and it’s the only mechanical weakness in an otherwise really well-put-together game.

Jess:  For sure, but like you said before, it has never come up.  We only hate it theoretically!

And it’s just that rule.  Otherwise, we think Cosmic Run is really solid.  It plays well at basically every player count, keeping the pressure tight with adjusted meteor rules.  Heck, it even has co-op and solitaire variants just in case that’s more your group’s speed.  Variety abounds!

Cosmic Run is a really engaging, truly enjoyable little game that delivers tons of quality filler fun in its modest package, and we unhesitatingly recommend it!

(Thanks to Doctor Finn’s Games for sending us Cosmic Run for review.  The King of Filler proves himself once more based on solid game design – our opinions weren’t influenced by his generosity)