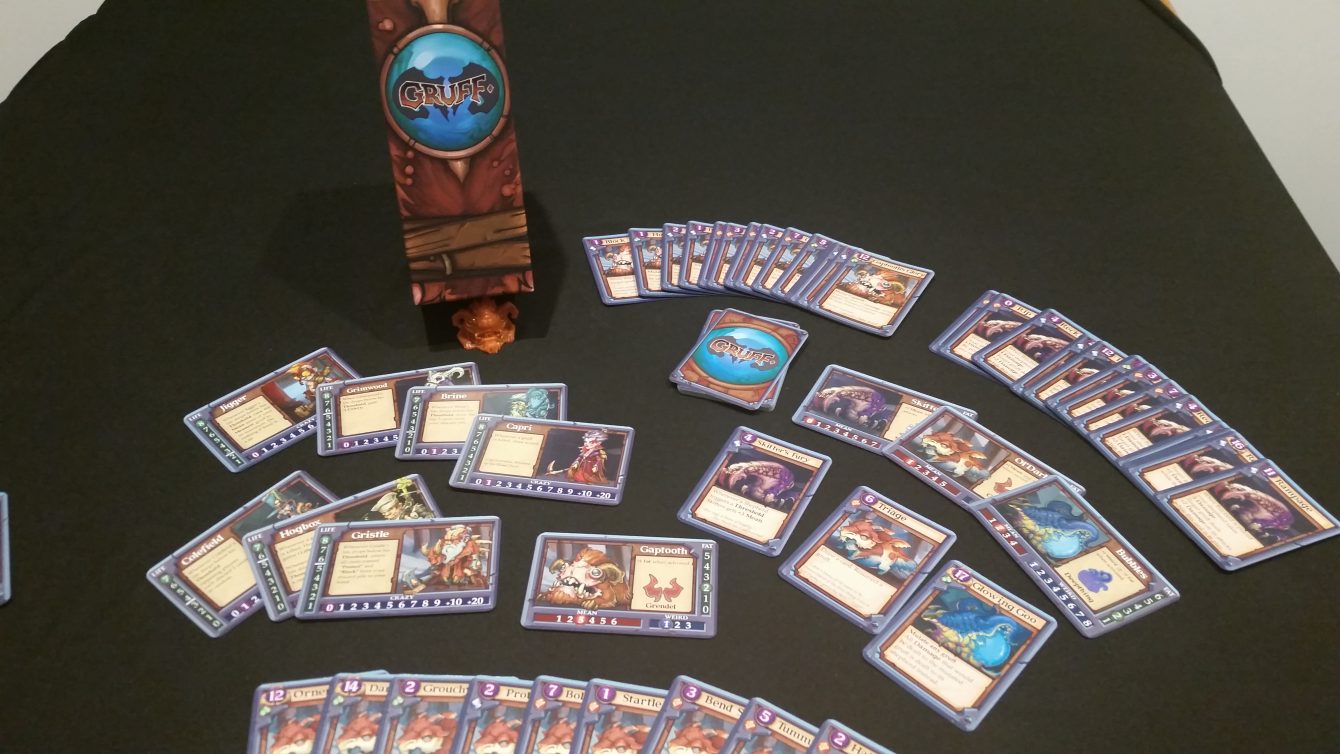 Gruff is the first game to come out of Studio Woe; a 2-player head-to-head constructed card game that features mutants, cyborgs, eldritch abominations, and necromantic magic, all powered by the waning sanity of those nightmarish enough to wield them.

Andrew:  No, that would be silly!  We are the Shepherds of Woe, who command a flock of Gruffs as we journey across the nightmare Betwixt, battling against other Shepherds who have been driven mad by their own flocks.

Andrew:  Uh, yeah, more or less.  Does that sound-

Gruff, designed by Brent & Virginia Critchfield, is a quick playing card game for 2 (though there are multiplayer and tournament rules available).  Each player will take on the role of a Shepherd of Woe (that name was friggin inspired, man), in command of 3 Gruffs.  Each Gruff is specialized to a certain style of play, and each has its own deck of completely unique cards.  To start the game, players will pick their Shepherd and Gruffs, and compose their deck of cards by selecting 8 of the 15 cards available for each of their Gruffs into a 24 card draw deck.

Andrew:  Right off the bat, it’s worth noting that the variety in Gruff is amazing.  There are 7 Shepherds and 15 Gruffs in the game – the possible combinations are immense, especially since you’re only using part of each Gruff’s deck when you play.

Once Gruffs are deployed and decks are built, players will take turns, activating their Gruffs and playing cards.  The Gruffs each sit in a ‘lane’, opposed by an opponent’s Gruff.  Moving Gruffs from lane to lane is part of the overall strategy, as is playing cards to enhance your Gruff’s stats and knock out opposing Gruffs so that you can get at the enemy Shepherd’s vulnerable bits.

Each Gruff has three stats, Mean, Fat, and Weird.

Andrew:  Weird is, thematically, how difficult it is to deal with a Gruff.  Every time a Gruff gets activated, the Shepherd’s Crazy stat increases by that Gruff’s current Weird (because dealing with these abominations constantly would erode anyone’s sanity).  But instead of being a bad thing, a higher Crazy lets the Shepherd use more (and more powerful) ability cards – each turn, Shepherds can play cards of a cost total equal to their current Crazy.  The Crazier you are, the more insane card combos you can pull off in a turn.

Gameplay continues in turns, with Gruffs wailing on each other and Shepherds activating powerful cards, until one Shepherd, beleaguered from the constant onslaught, finally loses their last life point and succumbs.  The ‘winner’, likely maddened beyond reason by the battle, is left to celebrate over the shattered flock of the loser and, hopefully, stagger away to recover the fragmented shards of their sanity.

Jess:  But in an awesome way.

Gruff is a medium-weight game, mechanically speaking.  While many of the Action cards are straightforward – dealing damage, increasing stats, letting players draw cards, etc. – many of them also open up the potential for clever synergies.  For example, a card might mutate a Gruff (mutations attach to Gruffs and are permanent until removed) so that every time it moves, it gains Fat.  Another card might let you immediately move a Gruff (normally something that can only be done once per turn).  So by using an Action to move the mutated Gruff and then moving it back, you can effectively add +2 to its Fat in a turn, and hopefully put it in a position to block incoming damage from the opposing teams.

Andrew:  What I like most about Gruff is how it speed-injects the feeling of other constructed deck games in its own tight format.  I was a big Magic player for a long time, and what I loved most about it was playing big creatures and cool spells.  Gruff distills the constructed experience, with the creatures providing the mana and lots of synergies between cards, so that you get a lot of that satisfying feel at a fraction of the time investment.

Jess:  And it costs, like, a thousanth as much as your Magic habit ever did.

Andrew:  Who can pass up a bargain?

Gruff is a very cool game.  The artwork is slick, the abilities are thematic, and each Shepherd and Gruff plays differently enough that it feels like you get a ton of variety in this little box.  While we haven’t tried any of the tournament/multiplayer rules, as a 2 player game, Gruff is rock solid and absolutely worth checking out!

And here’s a link directly to Studio Woe to buy playmats (and in case that Amazon link is ever down).

(Thanks to Studio Woe for providing us a copy of Gruff for review.  No matter how maddening the flock or terrifying the Shepherd, there was nothing they could do to mutate our opinions)

One thought on “Gruff Review”