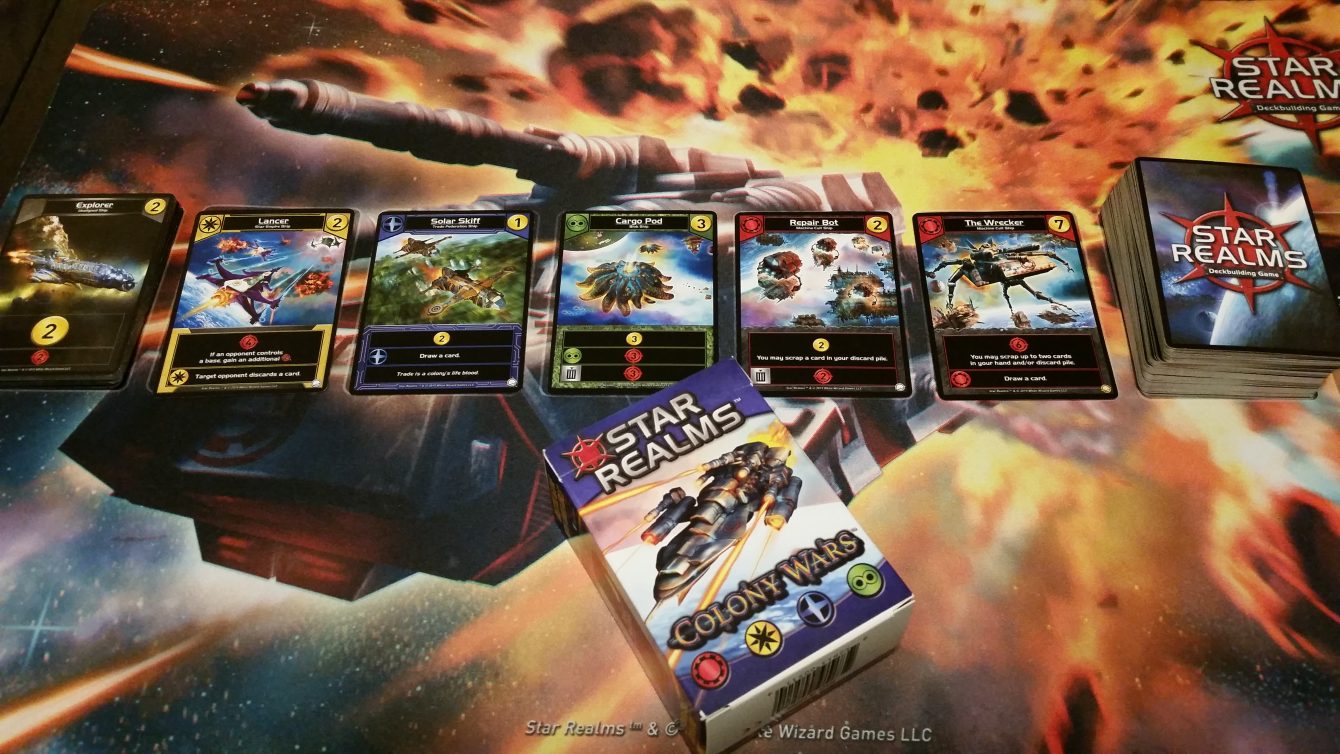 Colony wars is the first major expansion to Star Realms, the breakaway hit sci-fi deck builder from White Wizard Games.  How does this expansion, which is actually just as big as the original game, fair against its older sibling?  And more importantly, is it fun?

Andrew:  So, full disclosure, Star Realms is simply one of my favorite games of all time.  It’s a central part of our 2-player collection, a constant companion on the go (the digital version is quite playable), and just a really solid game all around.  So even if I gush a bit, just know that I went in with high expectations for Colony Wars.  But first, some background on the original.

Composed of nothing more complicated than a deck of cards, Star Realms manages to be an extremely tight, incredibly accessible deck building experience.  Designed for 2 players (but easily expandable to 4 or 6 with extra copies of the game) Star Realms hits all the high notes for deck builders – powerful synergies between cards, lots of great options, strategic card acquisition, and a fair bit of luck – and combines them to speed-inject all the best parts of the genre without much ado.  Star Realms is a lean game, presenting a complete experience for 2 in its modest deck box (and extremely modest price – it’s an unparalleled value at under $15 for the set).

Andrew:  Honestly, one of the compliments I found myself giving about Star Realms when it first came out was that it was without any extraneous elements.  White Wizard has released several small expansions for it since it first came out, each one adding a few cards as well as some small modules which could be added individually or together to the main game.  While I think it’s worth reviewing each of these mini-expansions on their own merit ::adds that to the review queue::, I was really surprised by the scope of Colony Wars, and, honestly, worried that it might clutter the Star Realms winning formula.

My fears, thankfully, were unfounded.

Colony Wars isn’t so much an expansion of Star Realms as much as it is a re-implementation.  Colony Wars is actually a stand-alone game – for the same $15 investment (or often less), you can snag a copy of Colony Wars and have everything you need to dive right in to 2-player deck building bliss.

The core gameplay is identical – each player starts with a fleet of 10 ships (8 give currency, 2 attack), and they will take turns acquiring new ships and bases from the central ‘trade row’, with the ultimate goal being the destruction of the opposing player’s Authority score (hit points).  What makes Star Realms (and Colony Wars) so immediately engaging is the simple combo system inherent to its design – ships and bases (almost always) come from one of 4 factions.  Each of these factions plays differently, emphasizing different mechanics, strengths, and weaknesses.

Mixing and matching cards from these four factions (plus maybe one or two faction-neutral cards), players will look to build the most effective fleet they can manage.  However, most cards have a ‘Faction bonus’, which triggers whenever they are played alongside another card of their faction.  That means that Blob ships make other Blob ships hit harder, Machine Cult drones go from preening your deck to generating more resources, and Star Empire fleets deal damage, force discards, and let you draw extra cards all at the same time.

Andrew:  All you have to do is match the colors and the combos make themselves!  Unlike many deck building games, the synergies are easy to see and implement in Star Realms, and I’m consistently surprised by how quickly even non-gamers pick it up.  However, there is plenty of depth to keep even a veteran gamer invested, and that is only more true of Colony Wars.

Colony Wars is, simply, more Star Realms.  As I said before, it is a stand-alone game, packed with excitingly powerful ships and bases, all eager to deploy in the name of your galactic conquest.  Just like with Star Realms, flipping through the cards of Colony Wars is like a whose-who of overpowered ships – of course, when everything feels OP, it probably means nothing is.  Though some complain about faction balance, in every direction, incidentally, Star Realms has never been about mono-colored decks (despite the Faction Bonus mechanism), and Colony Wars is no different.  If you are going to win, you probably have to draw on the strengths of multiple factions, and that’s a huge part of the fun.

Colony Wars introduces a couple of new mechanics, including cards that go directly from the trade row into your hand by various means.  This subtle change can actually make the game swingier and more chaotic, as the sudden purchase of, say, the Emperor’s Dreadnought can deliver a shocking 8 points of damage straight out of the trade row, as well as let you draw and force your opponent to discard.  These ‘row-to-hand’ cards aren’t all that common, but they shake things up (in the best way) when they go off.

What Colony Wars doesn’t do is reinvent the game.  Despite some new rules and a re-emphasis on scrap abilities (and scrapping from the trade row), Colony Wars is still, fundamentally, Star Realms; however, I say that as a high compliment.  And the best part of it all is the total compatibility between Star Realms and Colony Wars.  If you own both, just shuffle them all together, and wail away at each other – you’ll be hard-pressed to find a more satisfying way to play the game.

And if you’re new to Star Realms, I suggest starting with the base game (it’s just a touch less complex, mechanically), but I suspect you will soon want a copy of Colony Wars to complete your fleet!

(Thanks to White Wizard for supplying our copy of Colony Wars for review.  But honestly, I was going to buy it the second it hit retail anyway – their generosity couldn’t have influenced my opinion)