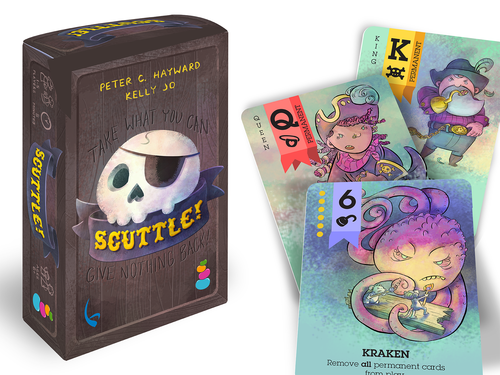 Jess: Don’t tell Andrew, but there is a new pirate-themed card game in town, Scuttle! Peter Hayward has designed this treasure hunting card game for 2-3 players ages 6 and up. It is the first title from Jellybean Games and looks like it is going to be a lot of fun for the family.

In the game, players either draw a card or play a card. Each card has a treasure with special abilities like steal from another player or form a crew. You can decide to either play a card into your treasure pile or use it to activate its ability. There are also two special Joker cards: Long John Silver who lets you swap hands with your opponents and Anne Bonny who lets you draw more cards than anyone else. Whichever player collects 21 doubloons is the winner. 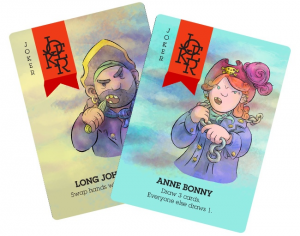 For a pledge of only $9 you get one copy of Scuttle! plus stretch goals as well as promo cards and a print & play of the game. If you up your pledge to $14 you’ll also get the Curse of Black Jack expansion. 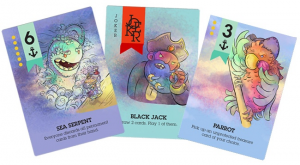 The expansion adds a new treasure of each value, three new crew members, and Black Jack. It also adds new push-your-luck rules which allow you to you can flip the top card of the deck. If it is treasure, you get to keep it. If not it gets discarded, but if you go over 21 points, you bust and lose all of your treasure.

Jess: Scuttle! looks like a super quick and light game. I love the art and the price is really reasonable. If you are interested in plundering some treasure, head over to the Scuttle! Kickstarter to pledge now!

One thought on “Avast Me Kiddies! Scuttle! is Boarding Kickstarter!”