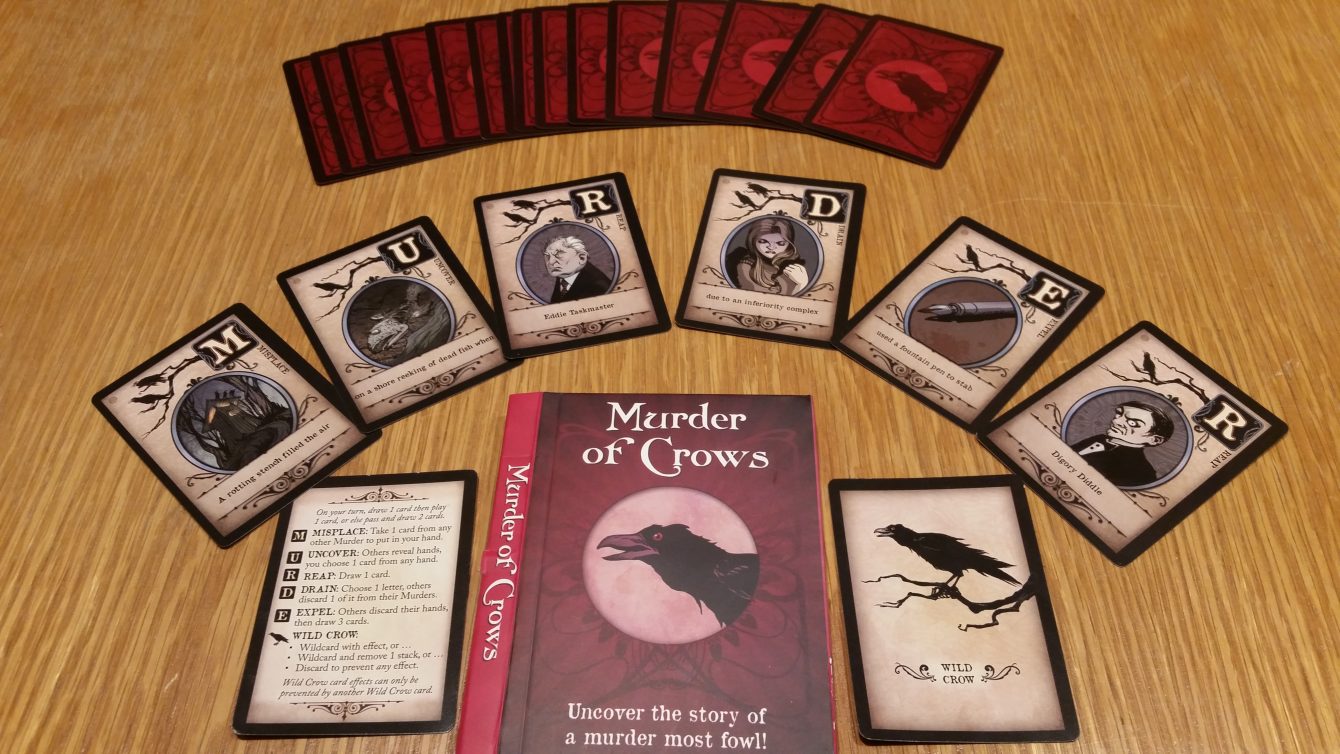 Murder of Crows is a quick playing card game by Eduardo Baraf and Thomas Denmark.  In it, 2-5 players will play cards from their hands, trying to spell out the word ‘Murder’ before their opponents can mange to, and to subvert and undermine other player’s attempts at doing the same.  It’s light and fast and very aggro – nearly every card is designed to mess with your opponents as we all race to be the first to uncover the dastardly crime that has been committed! (My disdain of puns prevents me from actually using the game’s tagline – A Murder Most Fowl)

Jess:  Normally, I really don’t like ‘take that’ style games, and Murder of Crows is definitely that.

Andrew:  Which is reasonable, given, you know, the murder bit.

Jess:  Hey, just because we’re discussing killing people doesn’t mean we have to be uncivilized about it!

Gameplay in Murder of Crows is really quite straightforward.  On your turn, you will either draw and play a card, or you will draw two cards.  Each of the cards (with the exception of the Wilds) is one of the letters which spell ‘Murder’, and each one has an effect that occurs when you place it in front of you (in a play-space also called, coincidentally, your murder.  Of crows, you see).

There are also Wild cards (Wild Crows, technically) which can be used as any letter and take on the property of the letter they are substituted for, or to bomb another player’s Murder pretty harshly.  The game ends immediately once a player has managed to survive the slings and arrows of her opponents and completes her Murder.  At that point, they get to read the little vignette that is composed of the text across their cards.

Andrew:  It’s true that it’s all pretty attacky, with people cutting cards out from under each other’s noses, but there are actually ample ways of defending yourself.

Firstly, each letter can be played more than once.  This is useful not only because it fills out your own Murder and lets you use the effects of those letters, but it also creates some insulation from being messed with.  Played 2 M’s?  Well now Drain can only force you to discard one.  It can’t save you from every bad thing, but it affords some insurance at least.

The other method of protecting your Murder is the simple counter system in Murder of Crows.  Each card has between 1 and 3 crows on the corner.  When a card is played, if you want it to stop it from affecting you (and only you), you can discard a card from your hand showing an equal number of crows.  That means that if someone hits the table with a 2-crow Drain, you could protect yourself by tossing any 2-crow card.

Jess:  The problem I have with take-that style games, aside from the fact that it drives me *bananas* when someone kicks over my sandcastle, is that they tend to drag – people pile on the leader to make sure they don’t win, while often not benefiting themselves and frequently ending in ‘kingmaker’ scenarios.  Murder of Crows actually manages to avoid much of that because not only is the game designed to be really quick, but the counter system means that, with enough card advantage, it becomes more and more likely that you can’t get screwed over by other players.

Andrew:  Yep.  The bigger your hand, the more likely you have the cards needed to counter other players’ actions.  It prevents players from just bashing each other forever, which, I agree, is one of the least fun things about this sort of game.  Murder of Crows is a straightforward game, but the fact that it doesn’t overstay its welcome means it avoids a lot of pitfalls similarly tuned games tend to fall into.  Most of the time, before it can feel samey or frustrating, a winner has managed to claw their way to the top.

Jess:  Just avoid playing with anyone who takes a little take-that personally.

Murder of Crows is a simple, vicious little filler.  It certainly won’t satisfy your need for deep or complex gameplay and it is undeniably an aggro take-that game, but as a quick filler and for the right group, Murder of Crows provides a little slice of dastardly fun.