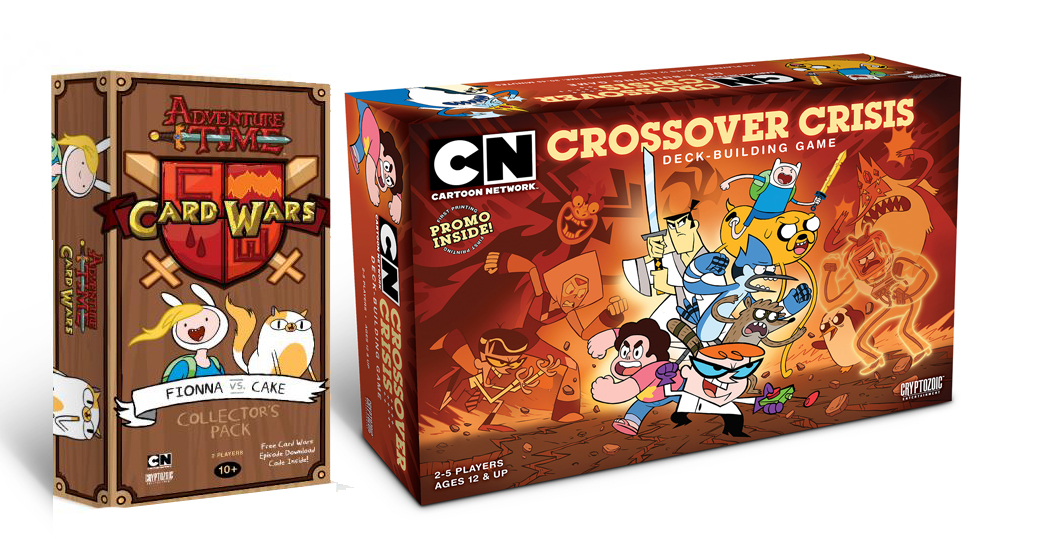 Cryptozoic is well known for their great games based on fun IPs like Ghostbusters, DC Comics, and Adventure Time. Coming soon, you can look forward to two animated favorites being added to their line up: Mach 30th will see the release of Card Wars: Fiona vs. Cake and on April 13th look out for the new Cartoon Network Crisis Deck-Builder!

In an awesome alternate-reality, our favorite Adventure Time heroes have their gender and species bending alter egos: Fionna and Cake! They are just as brave, adventurous, and cute as their couterparts and so is their game! Their decks return to the Cornfields vs Blue Plains adventure that happens in Adventure Time: Card wars, but you can expect some new surprises!

Fionna’s Blue Plains deck has a lot of versatility as in includes Rainbows. Also if Fionna gets her hands on any swords, she’ll become a force to be reckoned with. Cake’s Cornfield deck is more about Buildings. It has more Buildings than any other packs and it is possible to get more than four of them into play at a time! 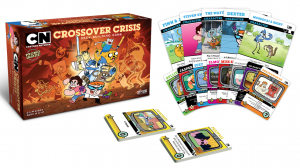 Are you a fan of Cartoon Network Then you are in luck. All of the CN’s best heroes are here to bust their nemeses! You’ll get to play with characters from Adventure Time, The Amazing World of Gumball, Clarence, Courage the Cowardly Dog, Dexter’s Laboratory, Johnny Bravo, Regular Show, Samurai Jack, and Steven Universe. That’s a ton of keen beans right there! Each hero has their own super powers and equipment to help take down the baddies. Of course the villains also have a few tricks up their sleeves.

Just like other Crisis games by Cryptozoic, Cartoon Network Crisis, uses the Cerberus Deck-building system so it will be compatible with other Crisis games. Just imagine putting Samurai Jack up against the Joker. Hilarity ensues! A unique aspect of this game is the introduction of Event cards which will change how the game plays out. The first printing of the game will include an over sized Dee Dee Character Card (from Dexter’s Laboratory) promo card!

These games are coming out soon, so save up your lunch money kids! Do you combine your Crisis decks? Who do you like to face off against each other? Let us know in the comments below!